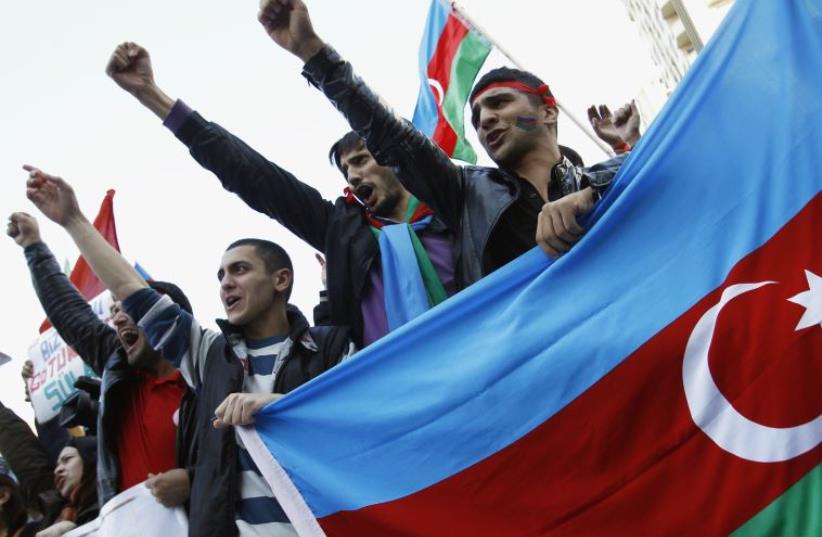 People attend an opposition rally in Baku
(photo credit: REUTERS)
Advertisement
A four-MK delegation is set to observe Sunday’s election in Azerbaijan, led by former foreign minister MK Avigdor Liberman (Yisrael Beytenu), chairman of the Israel-Azerbaijan Parliamentary Friendship group, and including ex-ambassador to the US MK Michael Oren (Kulanu), MK Sofa Landver (Yisrael Beytenu), and MK Yoel Razbozov (Yesh Atid).The four lawmakers arrived in Baku on Friday to supervise the election in the secular Muslim country, which has a 700 km border with Iran.As foreign minister, Liberman worked to strengthen Israeli ties with Azerbaijan, and said on Saturday night that it is “an important country and a good friend of Israel.“Even in the time of the Soviet Union, [Azerbaijan] was known to treat its Jewish community well, and there is no anti-Semitism there. We must continue strengthening our relations with Azerbaijain,” he stated.Azerbaijan is considered the Muslim country friendliest to Israel, and the two countries have close ties and significant trade. Azerbaijan is Israel’s biggest oil provider, and trade between the countries reaches $5b., more than with France.In recent years, Liberman, then-president Shimon Peres and Defense Minister Moshe Ya’alon visited Baku.Last week, Liberman told the Azeri Elections Media Center that the country is an example of democracy, stability, and successful foreign policy, Azernews reported.“Pre-election pressure against the country comes from double standards,” Liberman reportedly said. “Some countries try to make trouble for Azerbaijan, but I am sure that wise and successful foreign policies by Azerbaijan will not allow it.”According to Azernews, Liberman said Israel also faces double standards and understands Azerbaijan’s situation.Azeri President Ilham Aliyev, helped by an oil-fueled economic boom, will likely maintain his tight hold on power with a victory this weekend for his political party in polls opponents are boycotting and international rights groups say will not be fair.But Western governments balance their criticism over human rights with strategic considerations, courting Azerbaijan as an alternative to Russia in supplying oil and gas to Europe.Aliyev has consolidated power since succeeding his father and long-serving leader Heydar in 2003, overseeing a period when revenue from rising oil and gas exports has, officials say, brought better living standards for all.The image of Aliyev the elder is omnipresent, asserting the dynastic power base. His picture is seen in newspapers, his name attaches to institutes and streets, his statues adorn towns.Sunday’s parliamentary vote is widely expected to see Aliyev’s ruling Yeni Azerbaijan (NewAzerbaijan) Party comfortably maintain its majority in parliament.Low world oil prices and an economic slowdown in neighboring Russia, where huge numbers of Azeris earn a living, do not appear to have hurt the party’s prospects.“We got 71 (out of 125) seats at the previous election and we have every chance to repeat that victory this time,” the party’s executive secretary, Ali Akhmedov, said.Rights groups accuse the government of curbing freedoms and silencing dissent to prevent the rise of any political opposition, allegations the government denies. The mainstream opposition in Azerbaijan, a mainly Muslim country of about 9 million people, sandwiched between Iran, Russia and Turkey, has decided to boycott the poll.“The preelection period was marred by massive violations.That’s why we decided not to participate,” opposition Musavat Party leader, Arif Gajily, told Reuters.The opposition complained of a lack of free access to air time and restrictions on campaigning.Several rights activists and journalists have been sentenced to prison this year. They include Leyla Yunus, the head of the Baku-based Institute for Peace and Democracy, and Khadija Ismayilova, a prominent journalist from the US government-funded Radio Free Europe/Radio Liberty, known for exposing corruption among the country’s ruling elite.The Organization for Security and Cooperation in Europe (OSCE) said it would not monitor the election because of restrictions imposed by authorities have rendered credible poll monitoring impossible. A number of foreign journalists, including some from Reuters, were not issued with the accreditation required to cover the election.The Foreign Ministry cited technical difficulties.