Life in the West Bank’s capital of ‘martyrs’

The Hebron region has recently witnessed an uptick in Palestinian terrorist attacks. In the past 10 months 13 residents of Sa’ir have died while either attacking IDF soldiers or clashing with them. 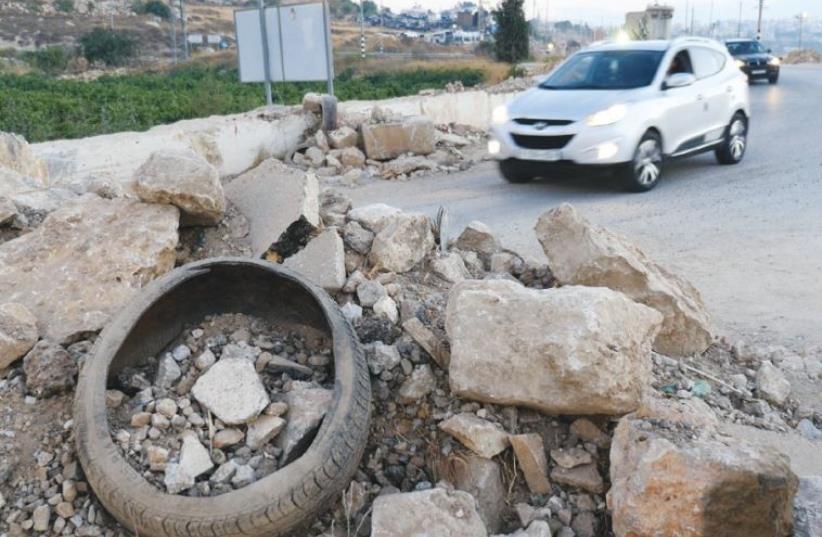 A MOUND OF EARTH is piled up to serve as a roadblock outside Sa’ir village yesterday. (
(photo credit: JACK BROOK)
Advertisement
Iyad Zarou waited six days to restock the shelves of his pharmacy in Sa’ir, a village near Hebron, where the IDF believed a Palestinian who carried out a shooting attack near Tekoa had fled.The Hebron region has recently witnessed an uptick in Palestinian terrorist attacks. In the past 10 months, 13 residents of Sa’ir have died while either attacking IDF soldiers or clashing with them, giving the village of 25,000 residents the title of the West Bank’s “capital of martyrs.” As a result, the village has experienced some of the most intense IDF scrutiny in the area.“It was a disaster here,” Zarou, 42, told The Jerusalem Post this week. “Until now, they [soldiers] came every night, doing damage, gunshots, everything. Nobody could go outside. To go out or to bring anything in was impossible.”Zarou, who lives in Hebron, had been unable to pass through the barrier of cement blocks, dirt, rocks and debris piled across the roads leading into Sa’ir, part of the IDF’s security measures to monitor movement and detain suspects inside the village. After the roads finally reopened last Friday, Zarou surveyed his shop. Medicines and other merchandise that he had not yet sorted through were scattered all over the floor.“I can’t run my business,” Zarou said. “There is no business when Sa’ir is closed, because my shop is here.”On June 30, the army closed a number of entrances to Sa’ir after a Palestinian shot and killed Rabbi Michael Mark on Route 60. The next week, on July 9, the IDF sealed the remaining entrances to Sa’ir following another attack, in which a Palestinian opened fire on a car near Tekoa, lightly wounding the driver. In the former case, the IDF believes the assailant fled to Dura, and in the latter case, to Sa’ir.The IDF says that its closure policies serve security necessities, such as arresting suspects and preventing attacks, and that it does not intend to indiscriminately disrupt the welfare of the general population. On July 15, the IDF lifted the closure on Sa’ir, asserting that it sought to relieve the stress on Sa’ir’s residents, even though the shooters remained at large.Sa’ir Mayor Kaed Jaradat told the Post that Israel may have had a security interest in imposing a full closure on Sa’ir, but this has led to harsh economic consequences for residents, who need to leave the village for work.“There are more than 100 quarries in the surrounding areas that are the main source of our economy,” Jaradat said.“About 600 people work in the quarries. And approximately 1,000 people work in the Israeli market and many others work in other places in the West Bank. If they can’t go to work, where are they going to go?” Jaradat stated further that deteriorating conditions are increasing the potential for violence.“These security measures are placing economic pressure on the people and undermining economic activity, dragging the people in the direction of undertaking more violent actions.”Even though the IDF has lifted the closure on the main entrance to the village, allowing some workers to return to their jobs, the atmosphere of resentment, frustration and anger continues to hover over residents young and old.In an electronics store on the town’s main road, Mahzoz Shlalda, a history teacher, says that the ongoing security measures and military presence have weighed heavily on locals.“Residents now can leave through the Nabi Yunis entrance to Sa’ir, but the army is still raiding our homes and shooting off tear gas,” Shlalda said. “The people have been emotionally and psychologically affected by these security measures; they’ve been harmed.”Just down the road from the electronics store, in Sa’ir’s central square, lie two gated plots of land filled with the bodies of those who died in the first and second intifadas. A third plot, the latest addition to the village’s “Cemetery of the Martyrs,” contains 13 new concrete graves, all from the last 10 months and many with fresh flowers.Back at the electronics store, Haitham al-Arameen says it is not fair for all of the residents of Sa’ir to bear the consequences of one individual’s actions.“It’s always the same story,” Arameen said. “Someone does something and then they put everyone under intense restrictions here. We’re tired of this – it’s not fair for the normal person. I just want to run my electronics business.”