Barak uses US aid package to pummel Netanyahu in US, Israeli media 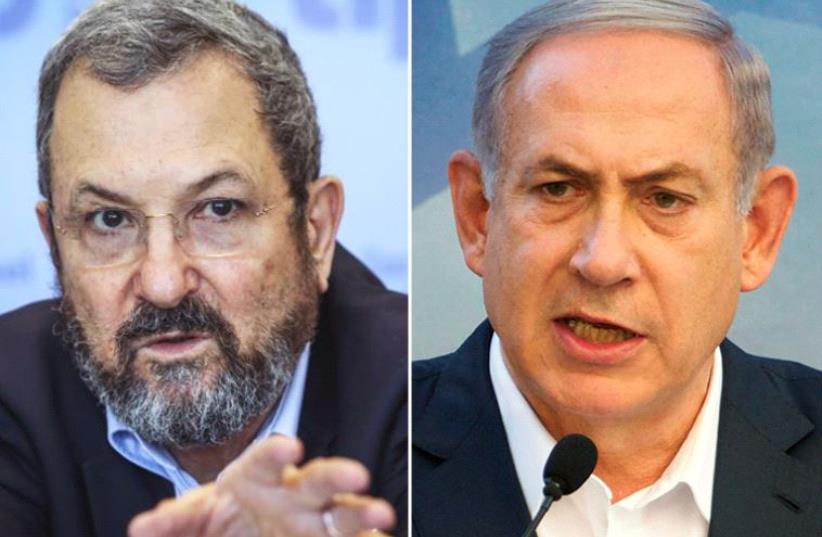 Netanyahu and Barak
(photo credit: MARC ISRAEL SELLEM & FACEBOOK,REUTERS)
Advertisement
A day after the US granted Israel the largest military package ever given another country, former prime minister Ehud Barak took to the media on Thursday to slam Prime Minister Benjamin Netanyahu for undermining Israel’s security.Barak, in a Washington Post op-ed and in subsequent interviews to Israeli electronic media outlets, wrote in relation to the $38 billion package signed on Wednesday in Washington that Netanyahu’s “reckless conduct” undermined Israel’s security since the assistance could have been considerably greater had the premier not quarreled with US President Barack Obama over the Iran nuclear deal.Sources close to Netanyahu fired back that instead of penning tendentious articles for the Washington Post, Barak should “eat his hat” because “after he spread [the notion] that Netanyahu damaged Israeli-US ties, we have the largest aid package in history.”The Likud issued a statement characterizing Barak’s op-ed as “nonsense written by the most failed prime minister in Israel’s history, who continues to make a mockery of himself in a pathetic comeback attempt.“Publishing an article attacking Israel’s policies in the US media on the day when the largest aid package in US history was signed is just more proof that what interests Ehud Barak is not the good of Israel and its security, but only what is good for Barak.”The op-ed came less than a month after Barak’s dramatic announcement at a conference in Rishon Lezion that Netanyahu had opened Israel up to a ”major security threat.” He has not yet provided any details.Barak, in his piece, wrote that the damage caused by Netanyahu’s “irresponsible management” of the relations with the White House is now fully apparent.“Israel will receive $3.8b. a year – an important contribution to our security but far less than what could have been obtained before the prime minister chose to blatantly interfere with US politics,” he wrote.“Moreover, given the more than 20 percent cumulative rise in the cost of arms since the last 10-year agreement entered into force (in 2007), the newly agreed-upon amount represents no greater purchasing power – and even these funds will be conditioned on Israel refraining from requesting additional funding from Congress.”Barak wrote that while expressing Israel’s opposition to the Iran nuclear deal was “certainly legitimate,” Netanyahu erred because “instead of holding a candid dialogue behind closed doors with President Obama,” he “went behind his back to deliver a speech to Congress, shaking the foundations of bipartisan support for Israel and dividing [US] Jewish opinion.”In addition to slamming the aid package, Barack characterized Israel as a country where “a sense of gloom” has taken over, and the country’s pride and self-confidence “have given way to fear-mongering, victimhood and internal quarrels.”Barak wrote that Netanyahu has exaggerated the threats facing the country, while providing no vision for the future.“If the government doesn’t steer away from its dangerous path, it will have to be replaced by a more responsible, attentive and courageous one – headed by whomever the people choose,” he wrote.Barak denied in multiple media appearances on Thursday that he is interested in returning to politics.Likud Minister Ze’ev Elkin told Israel Radio, in response to Barak’s claim that Netanyahu could have gotten another $7b. had he handled the relations with the US with more finesse, that the former prime minister was among those speaking with great self-confidence and assurance about what could have been achieved, even though he had no part in the negotiations.“Ehud Barak had a divine revelation, and he knows everything,” Elkin said. “In the final analysis, what do facts matter? The main thing is that for two weeks we did not talk about Ehud Barak, and [his] goal of [having us] speak about him again has been achieved.”There is no significance to anyone talking about what could have been obtained, if they were not part of the negotiations, Elkin said.Former defense minister Moshe Ya’alon, whom Netanyahu in May moved out of that position in favor of Yisrael Beytenu chairman Avigdor Liberman, wrote on his Facebook page that the agreement has a “tremendous significance” in securing Israel and its people.In a related issue, Jerusalem had no response to speculation that Obama signaled in a statement he issued after the signing that he intends to either bring a resolution on the Israel-Palestinian issue to the UN Security Council, or to give a speech laying down parameters for a final-status agreement, before leaving office.Obama said that the aid package “and efforts to advance the two-state solution are motivated by the same core US objective that has been shared by all administrations, Democratic and Republican, over the last several decades – ensuring that Israelis can live alongside their neighbors in peace and security.”Whenever they are asked whether Israel is concerned about what Obama might do to move the diplomatic process forward in the interregnum between the November 8 US election and when the new president will be sworn into office on January 20, officials in Netanyahu’s office say they expect that Obama will not divert from a speech he delivered at the UN in 2011 in which he stated that “peace will not come through statements and resolutions at the United Nations – if it were that easy, it would have been accomplished by now.”