Several Likud ministers are vying for the desired Communications portfolio, which Prime Minister Benjamin Netanyahu has been ordered to relinquish by the High Court of Justice. 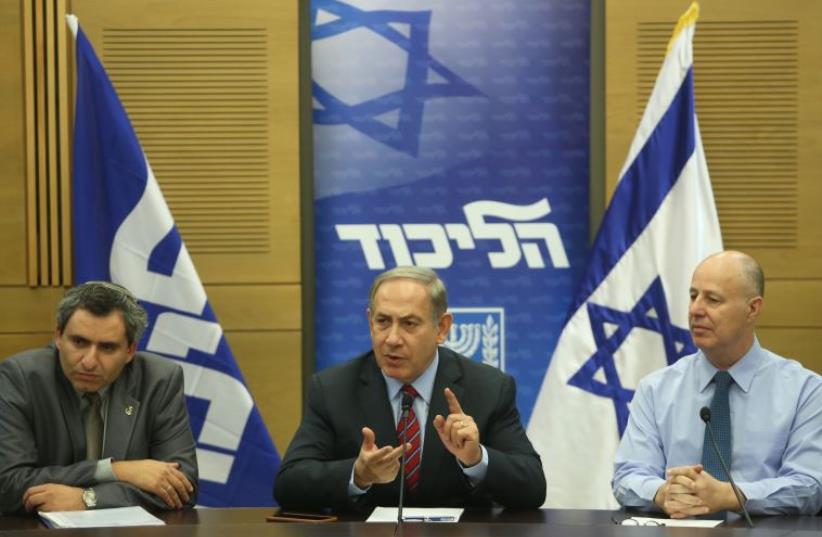 Netanyahu speaks at Likud faction meeting
(photo credit: MARC ISRAEL SELLEM/THE JERUSALEM POST)
Advertisement
At least four ministers are competing over the Communications Ministry that Prime Minister Benjamin Netanyahu will give up as early as the beginning of next week, Likud sources told The Jerusalem Post on Thursday.

The Post reported exclusively 10 days ago that Netanyahu will soon relinquish the Communications portfolio, due to investigations and lawsuits. He must give it up by February 20 in order to avoid violating an order from the High Court of Justice, which gave Netanyahu until then to explain why he has not given up the Communications and Foreign Affairs portfolios, or at least suspended himself from the former.But with visits upcoming to the United States and Australia, Netanyahu may choose to give up the Communications post before he leaves for the US on Monday and promote one of the ministers in Likud.Regional Cooperation Minister Tzachi Hanegbi, who has been one of Netanyahu’s strongest defenders in recent weeks, was considered the front-runner for the post.But his current role, which allows him to deal with foreign affairs, may be enough to keep Hanegbi content.Sources close to Netanyahu said Culture and Sport Minister Miri Regev has emerged as the new front-runner for the post. She is close to Netanyahu and his wife, Sara, and has been lobbying for the post behind the scenes.When asked on Israel Radio Thursday what she would do if given the post, she said her first task on the job would be closing the new Israel Broadcasting Corporation. She said the corporation was not transparent enough and did not have enough of a variety of views among its staff.“It is not being run correctly,” Regev said. “If it depends on me, I would do what I could to close it.”Social Equality Minister Gila Gamliel, who is Regev’s rival in Likud, told the Knesset Channel on Wednesday night that she saw herself as a candidate for the post as well and that she believed she could do the job well.The ministry is also being sought by Science, Technology and Space Minister Ofir Akunis, who was appointed a minister-without-portfolio in the Communications Ministry under Netanyahu when the government was formed. He left for his current portfolio when it was vacated by Danny Danon, when he became ambassador to the United Nations.When Yesh Atid complained to the court that Netanyahu held too many portfolios, Netanyahu preferred to relinquish the Health and Regional Cooperation portfolios rather than respond to the court. But the Communications portfolio is much more sensitive for Netanyahu, who refused to give it up when his government was formed and in subsequent talks aimed at broadening his coalition.
Advertisement
Subscribe for our daily newsletter