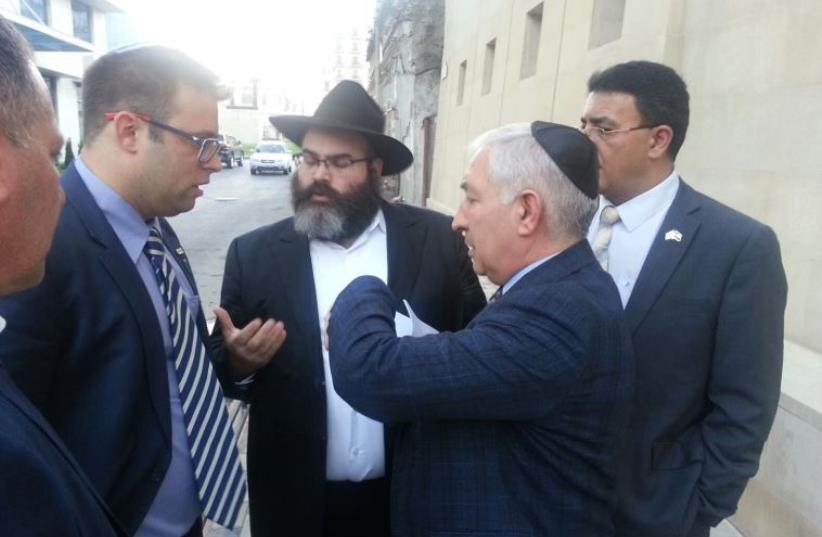 left MK Oren Hazan left, far right Mendi Safadi, center right Alexander Shapiro of Azerbaijan Jewish community, center left Azerbaijan Chabad...
(photo credit: MENDI SAFADI)
Advertisement
Likud MK Oren Hazan and Mendi Safadi, an Israeli Druse who served as former Likud deputy minister Ayoub Kara’s chief of staff, have returned from a trip to Azerbaijan where officials expressed deep friendship with Israel and a desire to cooperate in various fields.“For me as a Jew and the deputy speaker of the Israeli Knesset to walk in an Islamic country and feel safe like I was in Tel Aviv was amazing,” Hazan told The Jerusalem Post on Sunday.Israelis often think they do not have many friends in the world, said Hazan, but actually, there are people with whom we often do not realize we can build strong ties.In a visit to the largest mosque in Azerbaijan, located in the capital Baku, people told him the reason they are friendly with Israel while other Muslims are not, is that “We are not Arabs.”“They had no problem that Israel is the land of the Jewish people,” continued Hazan, adding, “How is it I can enter a mosque in Azerbaijan, but not in Israel?” Hazan and Safadi visited the country on the invitation of Ismael Agayev, the chairman of the Azerbaijan diaspora, who is also a candidate for parliament in the coming election. They also were hosted by Alexander Shapiro, an important figure in the local Jewish community.“The hospitality was great and the Azerbaijanis did not make me feel I was different,” said Hazan. “The Imam and I, in a visit to the largest mosque, agreed that God belongs to everyone and that it is in our hands to live together in peace.”Safadi recalls that in a videoed interview at the mosque he asked the Imam what his opinion was of the tensions at the Temple Mount in Jerusalem, to which the Imam responded that the argument that Jews cannot go up on the Temple Mount is against Islam and that those who oppose such visits are doing so for political, not religious, reasons.Safadi said public officials he did not want to name told the group that Turkey and Iran had pressured the country to publicly state its opposition to Israel and the “occupation,” but that the Azerbaijan government refused to do so.On Friday evening, Hazan attended Shabbat services and meal at the Chabad House with Safadi, Agayev, and several other Azerbaijani Muslim officials. Hazan addressed the congregation, saying it was “a very emotional experience seeing Jews on the other side of the world pray and singing like we were in Jerusalem.”The Chabad Rabbi showed him a letter from the head Sheikh of Azerbaijan addressed to Chabad, wishing the Jews a happy new year, as well as pictures of the sheikh visiting the Chabad house on several occasions.At the Synagogue they attended, there were no guards present as is the case in France and other European countries in Europe, according to Safadi, who said, “There were even Muslims near the Synagogue that said Shabbat Shalom to the Jews.”Safadi, who has traveled in the region and met with Syrian opposition activists – told the Post the purpose of the trip was public relations for Israel and to improve relations between the two countries.On a tour of the Salyan district of the country in the Southeast, Kerimo Tahir, the chief of the region’s executive committee, asked about how to build a kibbutz in his region using the Israeli model; an adviser to President Ilham Aliyev told the group he supports the Kibbutz initiative.In another meeting with two deputy ministers of the local welfare ministry, Natiq N. Mammadov and Idris B. Isayev wanted to learn about how Israel deals with handicapped people and expressed the desire to build contacts with Israelis who work in this field.Meanwhile, Safadi said the Co-Chairman of World Azerbaijanis Congress, Sabir Rustamkhanli, was extremely pro-Israel and expressed a desire for Israeli observers at the country’s elections later this year.Regarding Rustamkhanli’s political views and friendship for Israel, Safadi cracked that compared to right wing Yisrael Beytenu chairman Avigdor Liberman, “Liberman would be to the left of him.”The Muslims in Azerbaijan are modern and liberal, Safadi said, noting that the women dress as they do in Tel Aviv, adding that he almost never saw a hijab head covering.“In France, there are 100 times more hijabs than in Azerbaijan,” he said.