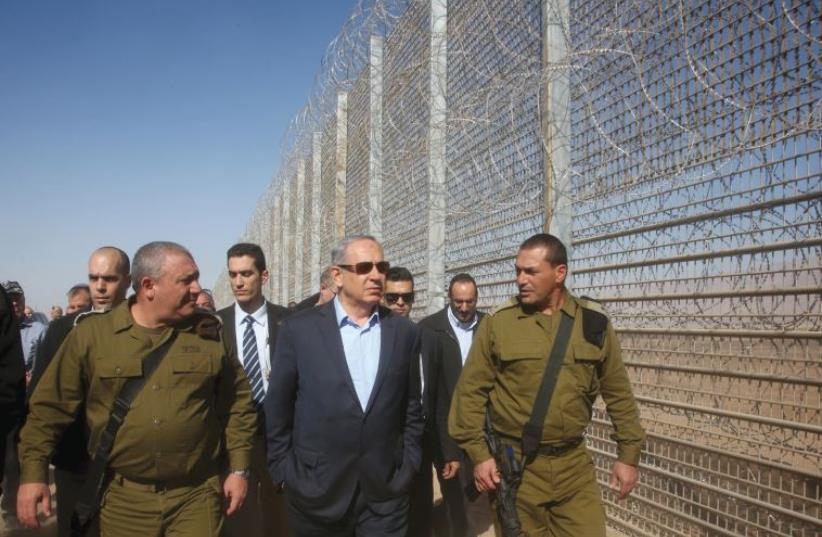 Prime Minister Benjamin Netanyahu (center) walks next to Chief of Staff Lieutenant General Gadi Eizenkot (left) during a visit to the border fence between Israel and Jordan near Eilat in February
(photo credit: MARC ISRAEL SELLEM)
Advertisement
Less than half as many Israelis believe that Prime Minister Benjamin Netanyahu's widening government will advance a diplomatic process with the Palestinians than those who believe it will, according to a Panels Research poll broadcast on the Knesset Channel Thursday. The poll found that 26 percent of Israelis believe the government that that was enlarged to include Yisrael Beytenu leader Avigdor Liberman will advance a diplomatic process, while 61% believe it will not. Panels pollster Menahem Lazar said self-defined right-wingers were more likely to believe a diplomatic process was on the way than left-wingers.Prime Minister Benjamin Netanyahu, who was deputy foreign minister in an arguably more right-wing government from 1990 to 1992 that participated in a regional peace conference in Madrid, has been saying for days that widening his government would help him advance a new process now. Despite the addition to the coalition of five Yisrael Beytenu MKs who support a Palestinian state and the departure of former defense minister Moshe Ya'alon, who opposed a two-state solution, US State Department spokesman Mark Toner said Lieberman’s appointment raised “legitimate questions” about Israel's direction.Asked whether Liberman would be a good defense minister, 44% of respondents said yes and 40% said no. Fifty-five percent said they did not trust Netanyahu with Israel's security and 42% said they did trust him.Regarding Education Minister Naftali Bennett's complaints about the functioning of the security cabinet, 49% said they agreed with him and 19% said they didn't. But only 23% said he should insist on the matter even if it meant toppling the government.Bennett said at an educational conference Thursday that he would not compromise on the matter, because he said it was critical for Israel's security that ministers have enough information when they vote to go to war. He reiterated that if the changes in how the security cabinet works were not made, Bayit Yehudi's eight MKs would vote against adding Yisrael Beytenu to the cabinet on Monday.Yisrael Beytenu faction chairman Robert Ilatov responded that Bennett should not make the votes conditional on anything, because Yisrael Beytenu's refusal to join the coalition last year enabled Bayit Yehudi to up its asking price and obtain the Justice portfolio.    The poll asked whether respondents would vote for a party headed by Ya'alon, former minister Gideon Sa'ar and former Yisrael Beytenu MK Orly Levy-Abecassis. Sixty-five percent said yes and 21% said no.Among Labor Party voters who responded to the poll, 24 percent said that if a leadership primary would be held now, they would back MK Shelly Yacimovich. MK Erel Margalit finished a surprising second with 21%, followed by current chairman Isaac Herzog with 15%, MK Amir Peretz will 13%, and MK Omer Bar-Lev with five percent.Margalit has made an effort to make himself more of a household name in recent weeks by using a blunt and strongly-worded campaign attacking Herzog and Netanyahu. Margalit, who had never scored in the doube digits until now, celebrated the results of the poll."This poll is the answer to those who are saying Labor has completed its historic role," the Margalit campaign said. "The party is renewing itself. The public believes that Netanyahu could be defeated."