Singapore lives in constant fear of a Malaysian invasion; this fear has encouraged the tightening of the bond between Singapore and Israel. 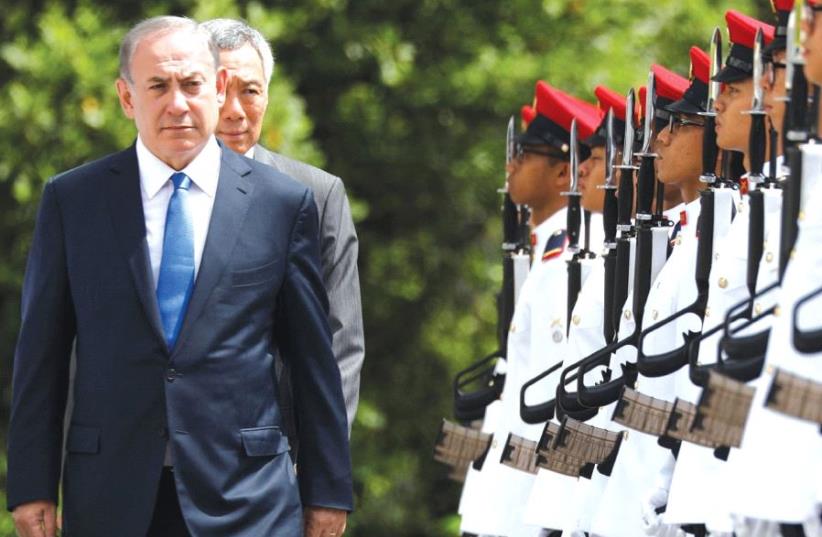 Prime Minister Benjamin Netanyahu inspects an honor guard with Singaporean Prime Minister Lee Hsien Loong at the Istana presidential palace in Singapore.
(photo credit: REUTERS)
Advertisement
SINGAPORE – To understand the sensitivity of Prime Minister Benjamin Netanyahu’s to Singapore on Monday, all one has to do is look at a map.Singapore – a powerful city-state on the southern tip of the Malay Peninsula – is surrounded by two large Muslim majority countries: Malaysia to the north, and Indonesia to the west and south.Malaysia is implacably anti-Israel, and Indonesia – though significantly less hostile – also does not have diplomatic ties with Israel and has the world’s largest Muslim population.Geography is destiny, and ever since Malaysia expelled Singapore in 1965, the country has lived in fear of a Malaysian invasion; especially as it is a country with a booming, bustling economy, contrasted to the situation of its northern neighbor.
PM Netanyahu arrives in Singapore (credit: GPO)
It is that fear of Malaysia which led to extremely close ties between Singapore and Israel.Even the current visit by Prime Minister Benjamin Netanyahu, the first official visit by an incumbent Israeli prime minister, has purposely been given a relatively low profile, so as not to stir up anger in neighboring Malaysia or Indonesia.A visit to the country in 1986 by then president Chaim Herzog resulting in anger and protests in those countries, thrusting Singapore-Malaysia ties into a nosedive as there were even calls in Malaysia to disrupt Singapore’s water supply as a result. Diplomatic officials said that Singapore was concerned that giving a very high profile to Netanyahu’s visit could trigger protests in Malaysia and Indonesia, that could then spill over into Singapore’s Muslim population as well.In his book, From Third World to First: The Singapore Story: 1965 – 2000, Singapore’s founding father and first prime minister, Lee Kuan Yew, wrote that Israel was instrumental in creating the Singapore Army, now considered to be the mightiest in Southeast Asia. Lee’s son, the current Prime Minister Lee Hsien Loong, shed additional light on this during his visit to Israel last year, the first ever by a Singaporean prime minister.Speaking at a ceremony at Hebrew University where he received an honorary doctorate, Lee said that “in August 1965, when Singapore unexpectedly became independent, the Israel Defense Forces helped us to develop the Singapore Armed Forces.“We asked a number of countries,” he said. “We were starting from zero... we needed to build up an armed forces urgently from scratch. But only Israel responded to us, and it did so very promptly.Weeks after independence, our Defense Minister Dr. Goh Keng Swee flew to Bangkok to meet the Israeli Ambassador, Mordecai Kidron there. He reported back to his headquarters and within a few months – by the end of the year, a team of IDF advisers had come to Singapore. We called them “Mexicans” for operational security, and also because we hoped that their swarthy looks might make the cover plausible. Within less than two years, by July 1967, guided by the IDF team, the SAF commissioned our first batch of officers from the officer cadet course. This was a decisive step in building up a credible and professional defense force for Singapore.“It was a time of great uncertainty for us,” he continued.“Britain was withdrawing its forces from the east of Suez, including its bases in Singapore.Without the IDF, the SAF could not have grown its capabilities, deterred threats, defended our island, and reassured Singaporeans and investors that Singapore was secure, and that Singapore had a future. Dr. Goh would later say that ‘in retrospect, it’s a minor miracle that we ever got off the ground... without the Israelis, we could not have [done] it.’ We will always be grateful that Israel helped us and stood by us, at our time of great need.”The ties between the two countries have branched out considerably since then, with annual trade at some $1.5 billion, and a great deal of research and development cooperation in various fields. But just as the economic relations between the two countries has blossomed, so too, according to foreign sources, has the security relationship greatly matured and developed.