Merkel, Abbas say there is ‘no alternative’ to two states

In the latter half of her remarks, Merkel criticized Abbas for turning to international forums to “unilaterally denounce” Israel. 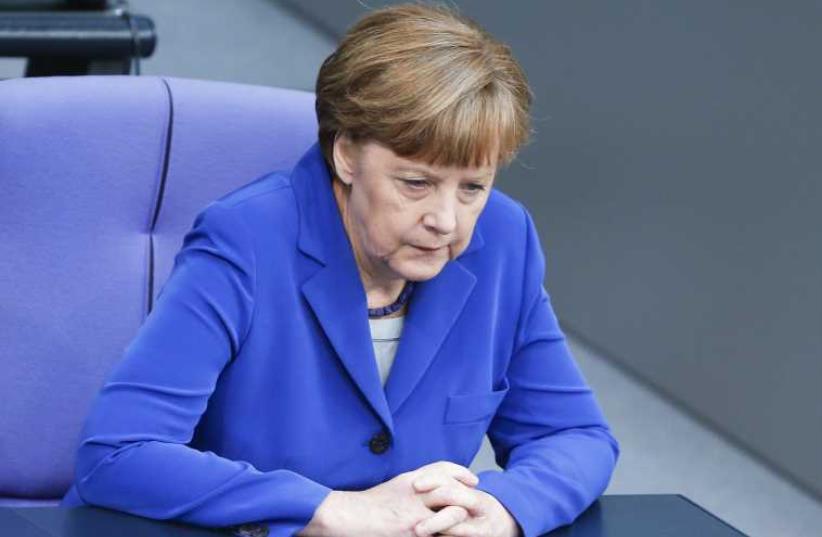 German Chancellor Angela Merkel commemorates the centenary of the massacre of 1.5 million Armenians by Ottoman Turk forces, during a regular session of the German lower house of Parliament, April 24
(photo credit: REUTERS)
Advertisement
German Chancellor Angela Merkel reaffirmed her support for the two-state solution at a joint press conference in Berlin with Palestinian Authority President Mahmoud Abbas on Friday.“As before, I see no reasonable alternative to the goal of a two-state solution,” said Merkel. “Both the Israeli and the Palestinian people have the right to live in peace and security and none of the other options can deliver that credibly.”The two-state solution has traditionally been a consensus among the world’s most powerful states. US President Donald Trump, however, cast doubt on his government’s commitment to the two-state solution in February at a press conference with Prime Minister Benjamin Netanyahu, saying: “I’m looking at two-state and one state and I like the one that both parties like. I’m very happy with the one that both parties like.”Merkel also expressed concerns over settlement building, which she defined as “an impediment to the resolution of the conflict” and “leading to the erosion of the two-state solution.”Israel, in January and February, announced more than 5,500 new settlement housing units and the Knesset passed a law last month that legalizes settlement outposts built on private Palestinian land.In the latter half of her remarks, Merkel criticized Abbas for turning to international forums to “unilaterally denounce” Israel, arguing that such moves contribute to the current stagnation in the peace process.Abbas has led a Palestinian campaign over the past several years to internationalize the Israeli-Palestinian conflict with the goal of pressuring Israel to make concessions, including ending its military rule over the Palestinian territories .While Abbas’s international strategy has succeeded in earning the “State of Palestine” recognition in many UN bodies, it has failed to change the reality on the ground.In his remarks, Abbas echoed Merkel’s sentiments on the two-state solution.“There is absolutely no other alternative,” he said. “Either there will be two states or the occupation will remain in place, resulting in racial discrimination and apartheid.”Abbas has consistently stated his support for the two-state solution and is expected to reiterate his backing for it at the Arab League Summit in Jordan on Wednesday.Abbas is currently on an international tour of the Arab world and Europe ahead of the summit and his upcoming meeting with Trump, which reportedly will take place in mid-April. Over the past week, he met with the Qatari Emir Tamim bin Hamad al-Thani, Egyptian President Abdel Fattah al-Sisi and Merkel.On Sunday, Abbas plans to travel to Brussels to meet with leaders of the European Union.