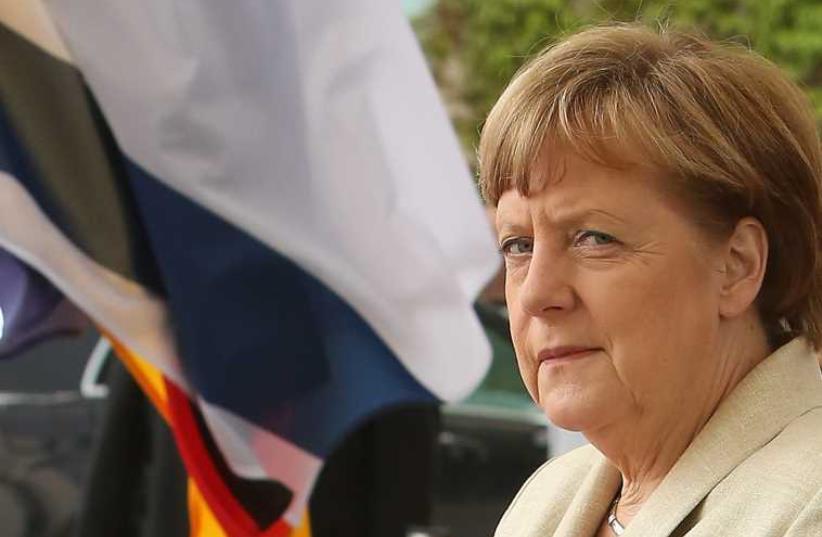 German Chancellor Angela Merkel (R) greets Israeli President Reuven Rivlin upon his arrival for a meeting at the Chancellery in Berlin on May 12, 2015.
(photo credit: ADAM BERRY / AFP)
Advertisement
German Chancellor Angela Merkel said it was “regrettable” that Prime Minister Benjamin Netanyahu had canceled a scheduled meeting with her country’s foreign minister, Sigmar Gabriel, in protest of his meeting with the controversial group Breaking the Silence.“We are of the view that it must be possible in a democratic country also to meet with critical nongovernmental organizations without it having such consequences,” the chancellor’s spokesman Steffen Seibert told reporters in Berlin on Wednesday.He added that in the past the chancellor had met with civil society groups when visiting Israel.Deputy Foreign Minister Tzipi Hotovely told Army Radio that the issue was not civil society or even all NGOs but ones such as Breaking the Silence.Israel had made it clear to Gabriel even before his arrival that such meetings were unacceptable.“Our friends cannot act to harm Israel,” Hotovely said, adding that this is a “redline” which can’t be crossed.The Foreign Ministry has explained this to foreign governments for the last yearand- a-half, but Israel has only recently moved the issue from the back burner to the front burner, she said.This is an organization, Hotovely charged, that distributes falsehoods and harms the soldiers who are serving the country by seeking to turn them into war criminals.“I am not prepared for my brothers, my husband and all the people around” to live under such a threat, she said.Israeli soldiers fight two battles, one against Hamas and the second is against NGOs like this, she said.“They are an enemy that harms Israel,” she said.Gabriel held a closed door meeting in Herzliya with Breaking the Silence, B’Tselem and Peace Now on Tuesday night.“Civil society will not take orders or succumb to pressure.We will go on opposing the injustices of the occupation until it becomes a thing of the past,” the groups said in a statement.Earlier in the day Netanyahu explained that he had set a new policy by which he would no longer meet in Israel with visiting dignitaries who on the same trip met with groups that slander Israeli soldiers.
Netanyahu snubs German minister over plan to meet far - left groups like Breaking the Silence (credit: REUTERS)
“My policy is clear: not to meet with diplomats who visit Israel and meet with organizations that defame IDF soldiers and try to prosecute our soldiers as war criminals, which diplomats would never consider doing in the United States, Britain or anywhere else,” Netanyahu said.“Our soldiers are the basis of our existence,” he said. “They are guarding us, and we will protect them.”Hotovely said his comments were aimed specifically at Breaking the Silence. Its members are former Israeli soldiers who served in the West Bank and Gaza and now criticize Israeli actions in the Palestinian territories. Reports that it publishes have been used by the international community and the Palestinians as part of the diplomatic warfare against Israel.Breaking the Silence executive director Yuli Novak said, “Just when I thought I had seen everything, the last 48 hours surprised me.”She spoke at a Meretz Party event on human rights that same night. She told the audience that Netanyahu’s conduct was so much worse than that of “a bull in a china shop” that in this situation that adage could be considered a compliment.Anat Ben Nun of Peace Now, who was in the Gabriel meeting, told The Jerusalem Post she felt Netanyahu’s words implicated other Israeli NGOs also.“It’s a scare tactic. It’s easier for him [Netanyahu] to go after a specific group at a time,” she said. “It’s a way to shrink the democratic space by delegitimizing anyone who opposes government policies,” she said.Visiting foreign dignitaries from Western countries have traditionally met with civil society representatives while visiting Israel and the Palestinian territories.Until this winter, Netanyahu has not made a public issue over those meetings. In March, Peace Now gave briefings on Israeli settlement activity during a West Bank visit by British Foreign Secretary Boris Johnson, without garnering public rebuke from Netanyahu.Until now, Israel has had only a twofold requirement for visiting dignitaries. They cannot meet with Hamas.Travel to the Palestinian territories to meet with Palestinian Authority officials must be accompanied by meetings with Israelis.The first sign of Netanyahu’s new policy was in February, when Israel reprimanded Belgium after discovering that its prime minister, Charles Michel, had met with Breaking the Silence during a visit to Israel.All three groups – Breaking the Silence, B’Tselem and Peace Now – publish reports critical of Israeli actions over the pre-1967 lines, reports that have been distributed to European and US officials and the United Nations.Representatives from Peace Now and B’Tselem testified in the fall at a United Nations Security Council “Arria-formula” meeting in New York against West Bank settlement activity.In their Tuesday night statement, the NGOs said: “Whether addressing the Israeli public or the international community, our message is the same: As Israelis, we cannot allow the 50-year-old occupation and its attendant human rights violations to carry on.“The Israeli prime minister and most of his colleagues in both the coalition and opposition parties have no intention of ending the occupation.“Therefore, firm determination and resolve by the international community is essential to making it clear to Prime Minister Netanyahu that his actions on the other side of the Green Line, i.e., beyond Israel’s sovereign borders, quite simply cross the line,” the groups said.Benjamin Weinthal contributed to this report.