Merkel: 'We expect Abbas to condemn acts of terrorism'

Netanyahu to tell Kerry Thursday that PA incitement must stop. 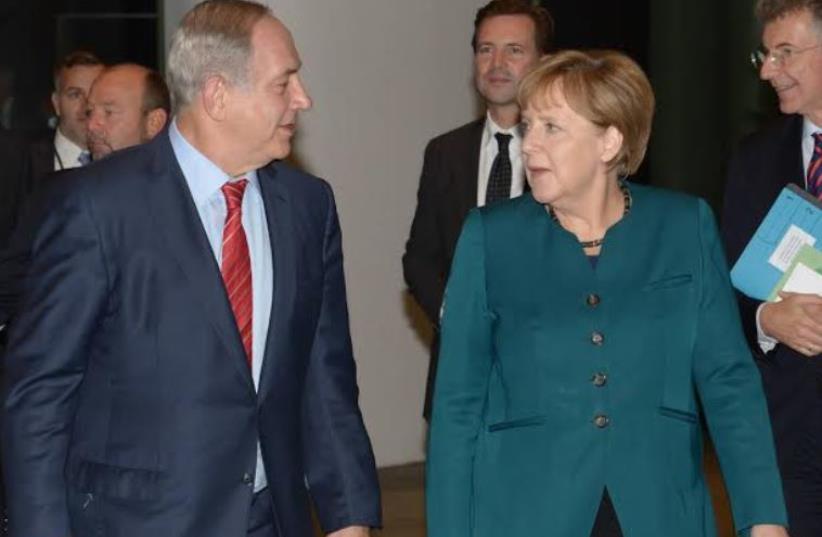 German Chancellor Angela Merkel with Prime Minister Benjamin Netanyahu in Berlin, October 21, 2015
(photo credit: AMOS BEN GERSHOM, GPO)
Advertisement
BERLIN – Prime Minister Benjamin Netanyahu met with German Chancellor Angela Merkel on Wednesday – during a visit that coincided with 50 years of diplomatic relations between the two countries – to discuss the wave of Palestinian violence inflicted on Israelis over the last two weeks.“One can clearly see that the situation is tense. Israel has the obligation to protect its citizens, but the means have to be commensurate with the goals,” said Merkel.Merkel reiterated her long-standing view that Israel’s security interests are integral to Germany’s interests.“Germany’s relationship with Israel is unique. We will continue to protect Israel and always stand up for Israel’s existence. It is part of our raison d’état.“Israel has faced attacks since its establishment and we think a two-state solution is the best possibility” for Israel, Merkel added. “The settlements are counterproductive and everything should be done to calm the situation down.”“We expect him [Palestinian Authority President Mahmoud Abbas] to condemn everything that constitutes an act of terrorism. One can’t have open talks with Israel if this does not happen.”She added that, “Young Palestinians need a perspective and unilateral steps are not helpful,” but did not define the unilateral moves.In a moment of levity, Merkel said, “I don’t know if I am allowed to say it. Happy birthday.”The prime minister turned 66 on Wednesday.The issues of Iran and Syria are slated to be discussed in depth over dinner on Wednesday, Merkel said.Netanyahu thanked Merkel for Germany’s “unrelenting support” of Israel. He said, “Just today we had three more attacks. There have been close to 40 [Palestinian] attacks over the last few weeks. Palestinian terrorists murder Israelis with axes, knives and cars.“Palestinians announced on their Facebook pages they are killing Jews,” Netanyahu said, adding, “They want to kill Israelis, because they want to kill Jews and destroy the State of Israel.”He stressed that Israel cannot make peace with Palestinians who engage in terrorism and that “peace has to involve mutual recognition and iron-clad security for Israel.”He accused PA President Mahmoud Abbas of “joining the Islamists” to spread lies about the Temple Mount. Israel “maintains the status quo” at the Temple Mount and is the only guarantee for holy sites,” Netanyahu said.He noted that militant Shiite and Sunnis are blowing up mosques elsewhere in the Middle East, while Israeli safeguards religious sites. Merkel responded, “I think that the present status of the holy sites needs to be continued. It is an important message to send to the Arab world.”Netanyahu called on Abbas to end incitement and urged Europe to pressure him to rein in his anti-Israel rhetoric. “I am saying this. Incitement leads to terrorism. We need to stop terrorism.To stop terrorism, incitement needs to stop. I think it is possible to restore calm.”Netanyahu said Germany and Israel are cooperating in all areas and that Germany serves as an example “for all of humanity and how two peoples can seize the future.”The horrors of the past are never forgotten, added Netanyahu, in a reference to the Holocaust.“Every time we meet something happens in the Middle East. I hope we can meet when nothing happens,” said the prime minister.Merkel said Germany “can only create a supportive atmosphere and we cannot force them [Israelis and Palestinians] to talk.”Regarding Syria, Merkel said a “man such as Assad will not have a political future in this context. Assad has to stop using barrel bombs. The enemy has to be ISIS, not the Syrian people.”Netanyahu said Israel is not involved in the Syrian civil war.Israel’s only intervention, he said, was to set up a military field hospital on the northern border, which has provided medical care to thousands of wounded Syrian civilians.Netanyahu is scheduled to meet with US Secretary of State John Kerry on Thursday. Before leaving for Berlin, Netanyahu said he will discuss with Kerry ways to calm down the situation.He stressed that he will urge Kerry to demand that Abbas stop the incitement, which he said was the source of the recent terrorist attacks.“In order to end the killing the incitement must be halted,” he said.Kerry is scheduled to meet with Abbas in Amman on Friday.Regarding Israel’s relationship with Germany, Netanyahu said that country “is a very important partner for Israel in regards to our national security.”In addition to discussing the current situation and the need to stop Palestinian incitement with Merkel, Netanyahu said they will also discuss “key security issues which Germany is assisting Israel with.”