"The boycott which Amos Oz has declared on the Foreign Ministry provides a boost to the boycotts which Oz claims to oppose," the former ambassador to the US said. 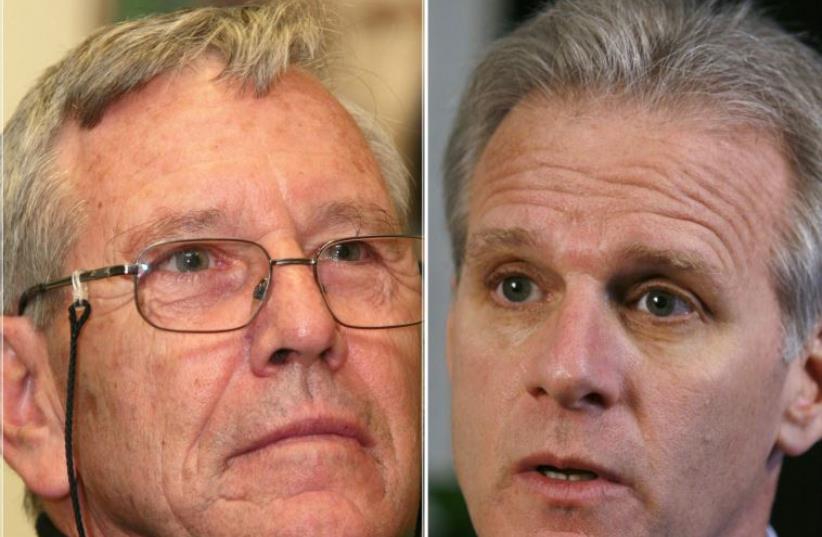 Kulanu MK Michael Oren (R) and author Amos Oz
(photo credit: REUTERS)
Advertisement
The decision by Amos Oz, one of Israel's most celebrated authors, to shun events staged by the Foreign Ministry has drawn the ire of the former ambassador to the US and freshman parliamentarian Michael Oren.Oren, who joined Moshe Kahlon's Kulanu list prior to the most recent election, said on Friday that Oz's decision to stay away from officially sanctioned events amounts to a de facto boycott of Israel."The boycott which Amos Oz has declared on the Foreign Ministry provides a boost to the boycotts which Oz claims to oppose," Oren said.Oz, the author and Israel Prize laureate, decided to quietly decline Foreign Ministry invitations to attend formal functions abroad due to the “radicalization” of the government’s policies.“I am often invited by my publishers abroad to take part in the launching of translations of my books. Following the radicalization in the policy of the present government in various areas, I told my hosts abroad that I prefer not to be a guest of honor in events organized for me by Israeli embassies,” he told The Jerusalem Post on Thursday.“However, I strongly oppose the BDS [movement] and I strongly oppose the idea of boycotting Israel. My decision is aimed against the government not against my country,” he said.A boycott goes “against everything I believe in,” he added. Oz doesn't appear to have convinced Oren."Amos Oz, the most famous Israeli author in the world, claims that he is against boycotts yet he announced that he is boycotting the Foreign Ministry," the former ambassador said."For years, the Foreign Ministry has given Amos Oz a platform to present his literary works," he said. "Now, after he has solidified his standing, he feels comfortable enough to boycott those same events that served to promote him.""This is tantamout to nothing less than spitting into the well from which you have drank throughout the years," Oren said. "While I admire him greatly as an author, Amos Oz represents a segment of the population that on the one hand supports democracy and pluralism only when it suits their opinions.""During my tenure as ambassador in Washington, I hosted authors and artists ranging from Etgar Keret, to Rita, to Idan Raichel, to David Broza, to Ahinoam Nini," he said. "They came to the events out of love for their country and pride in its culture."Using a play-on-words with the title of one of Oz's novels, Oren said: "This is a tale of no love and darkness."Oz, one of Israel’s best known authors, has been an outspoken supporter of a two-state solution and has often been critical of right-wing government policies.Oz has repeatedly said he believes peace can be reached with Palestinian Authority President Mahmoud Abbas, thus reducing the Israeli-Palestinian conflict to an Israel-Gaza conflict.A Foreign Ministry spokesman declined to comment, saying only, “We are not responding in light of the respect we have for Amos Oz.” Lidar Grave-Lazi contributed to this report.