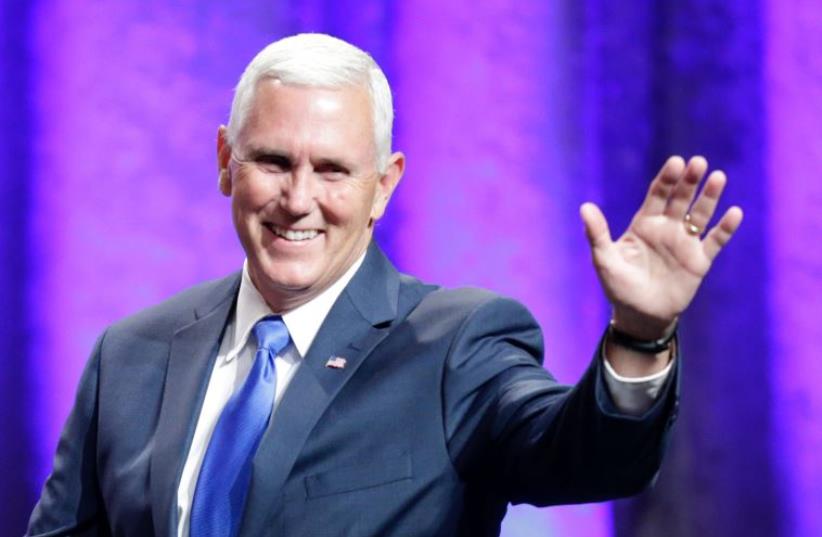 US Republican VP candidate and Indiana Gov. Mike Pence
(photo credit: REUTERS)
Advertisement
NEW YORK – The Republican pick for vice president, Indiana Governor Mike Pence, is “one of the best friends the State of Israel and the Jewish people have ever had,” according to Pence’s long-time friend and unofficial surrogate, Tom Rose, who was also the publisher of The Jerusalem Post in the early 2000s.Rose spoke to the Post on Wednesday, wishing to counter recent reports stating that Pence would be a bad choice for the Jewish community.In a piece published by Haaretz last week, Indianapolis Rabbi Dennis Sasso wrote that “Indiana Jews have long been repelled by Mike Pence’s anti-LGBT, anti-immigrant, anti-choice stances.”According to Sasso, while he is a “pleasant and amiable person,” and has shown support for Israel by signing an anti- BDS bill into law this year, Pence has “countered the very foundations of religious and moral values he purports to advance.”Rose, who describes Pence as his “closest personal friend for over 25 years,” told the Post that Sasso’s effort to “smear and defame one of the best friends the State of Israel and the Jewish people have ever had” should be called out.“This is an attempt to rob a good and decent man of his most valuable possession, an attempt to rob him of his good name,” Rose said. “A world in which good people are called bad and bad people are called good, that’s a world that’s lost its moral bearing.”According to Rose, what drives criticism of Pence is the fact that “the mainstream organizations, the organized entities of the Jewish community, are being increasingly driven left. In certain communities it’s the professional leadership of the groups, in others it is far left or progressive religious leaders, rabbis. In their world, anti-Semitism is this new word to describe anyone or anything that’s opposed to the left-wing political agenda: you’re an anti-Semite if you’re pro-life, you’re an anti-Semite if you’re skeptical on the science of man-made climate change, and it seems that the only way to be pro-Israel is to be anti-Israel.”According to the 2013 Pew Research Center study on American Jewry, the Jewish community in the United States traditionally leans more Democratic. About 70 percent of American Jews identify themselves as Democrats, and only 22 percent line up with the Republican Party.As governor of Indiana, some of Mike Pence’s policies came in conflict with the political positions of this Democratic majority in the Jewish community. Signing the Religious Freedom Restoration Act, which allows a private business to refuse services to LGBT persons on religious grounds, or his anti-abortion stance, are examples of this.While he does not deny that the majority of the US Jewish community may disagree with Pence, Rose said a distinction should be made in terms of the reasons why they disagree with the vice presidential pick.“The implied allegation here is that Jews are opposed to him for Jewish reasons,” Rose said. “That’s a slander.”According to Rose, it should be made clear that the divergence stems from political and irreligious positions.“He’s been my closest personal friend for 25 years,” said Rose. “If he’s an anti-Semite, words have lost all meaning.If you want to disagree with Mike Pence, disagree with Mike Pence, but this attempt to delegitimize him, to slander him, and accuse him of being anti-gay or, of all crazy things, anti-Semitic, is an obscenity and it has to be called out.”Rose added he believes his long-time friend is the “perfect pick” for the Republican vice presidential nomination.“For any other of the vice presidential contenders that were spoken about, [running with Donald Trump] could have been a disaster,” he said.“I’ve said it before and I’ll say it again: if Donald Trump wins the election, at some point Mike Pence will be president of the United States. If Donald Trump loses the election, at some point Mike Pence will be president of the United States.“Either way this ends, Mike Pence will be president of this country, for the simple reason that he is showing himself not just to be a grown up and a facilitator and healer, but a man who hears and understands public frustration and demands for change,” Rose continued.Rose added, however, that he is worried for the Republican ticket for this election.“It really wouldn’t be a bad idea for the Republican presidential candidate himself to begin to act like a presidential candidate and get his act together, start focusing on those issues, start focusing on Hillary Clinton, on the economy,” he said. “Until and unless Mr. Trump can more clearly focus his message and not get distracted so often and so regularly, I think the ticket is in trouble.”According to reports in US media quoting sources close to Ohio governor John Kasich last week, Trump’s son, Donald Jr., offered Kasich a powerful vice presidential seat in which he would be in charge of both domestic and foreign policy while Trump will “make America great again.”Rose said that if the Trump- Pence ticket wins in November, Pence “certainly stands on the verge of becoming one of the most important and consequential vice presidents in recent memory.”