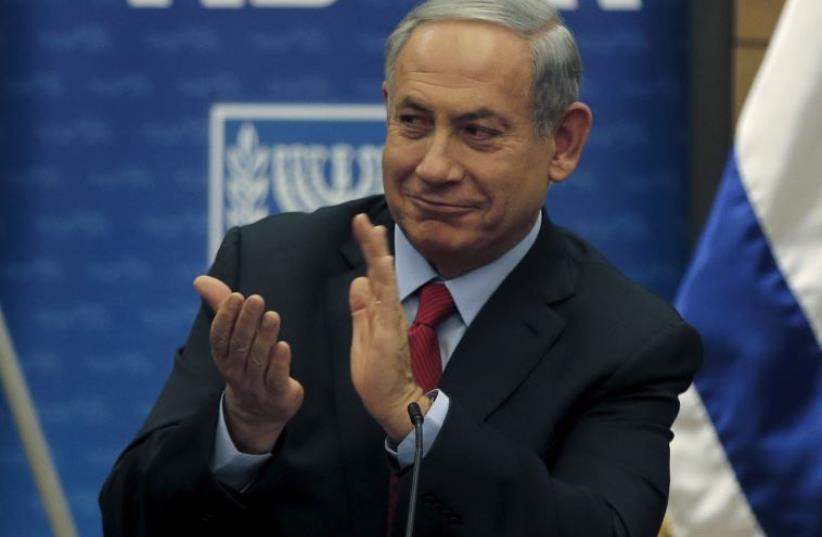 Prime Minister Benjamin Netanyahu attends a Likud party meeting at parliament in Jerusalem
(photo credit: REUTERS)
Advertisement
The “V15 bill,” which would limit political organizations’ ability to raise funds in an election year, received approval from the Ministerial Committee for Legislation Sunday.The coalition will vote in favor of the bill in a preliminary reading, after which coalition parties agreed to negotiate changes to the text.Prime Minister Benjamin Netanyahu endorsed the legislation, proposed by Likud MK Yoav Kisch earlier this month, but Ministerial Committee for Legislation chairwoman Justice Minister Ayelet Shaked voiced opposition and abstained from Sunday’s vote.According to Shaked, “The bill in its current version shames our democracy.”The legislation would make the fund-raising limitations on nongovernmental organizations that are involved in elections – meaning that they publicize messages supporting or opposing a political party, order or conduct polls, offer rides to voting booths, or contact voters for a specific party – similar to those on a political party or organization affiliated with a specific party. If the legislation becomes law, the organizations will not be able to accept contributions of more than NIS 1,000 a month in contributions, or NIS 2,300 per month in a national or municipal election year. They also may not accept funds from anyone who cannot vote in an Israeli election, meaning almost anyone abroad.Kisch said the bill was inspired by the last election, in which “unknown people tried to influence the public’s decision.”The bill’s explanatory portion refers specifically to V15, an organization that campaigned against Netanyahu with rallies, billboards and going door-to-door using advanced data research methods to target voters by the issues likely to be important to them. V15 worked with two-state solution advocacy organization OneVoice, which had previously received funding from the US State Department, fueling theories about the White House intervening to stop Netanyahu from being reelected. V15 and OneVoice, which have since merged and are now known as Darkenu (Our Way), said all of their donors for the election-time campaign were Jews, some in Israel and some abroad.The 1999 election, in which fictitious organizations were allegedly used to funnel foreign funding to the campaign of then-prime ministerial candidate Ehud Barak, was also mentioned in the bill’s explanatory section. The case was closed in 2006 without indictments.The bill also says it seeks to avoid a situation like that in the US, in which Super PACs that are not officially connected to an election campaign can raise unlimited funds to support a candidate, such that “there is no effective limitation on the very wealthy’s intervention in elections.”If the bill does not pass, Kisch said, “the last election could only be the beginning. If we don’t fix the situation today, in the next election we will see even uglier phenomena on both sides.“The ministers chose to vote for my bill and for Israeli democracy,” Kisch said. “We will all know that we are protected from foreign entities’ intervention in our democracy during the next election.”Darkenu said of the bill that “Netanyahu wants to censor us. He has no idea how to stop the intifada, so instead, he is busy trying to silence us with bizarre bills that eat away at Israeli democracy.“Every citizen today, on the Right and Left, should be concerned about its cowardly leadership that is doing everything to prevent legitimate criticism by citizens,” Darkenu spokesman Eyal Basson said. “We won’t let him. Israel is our country, it belongs to all of us, and we will never stop fighting for its future. Netanyahu has his censorship laws and his newspaper, but we have each other. We have the power to build a better, more just Israel for all of us.”