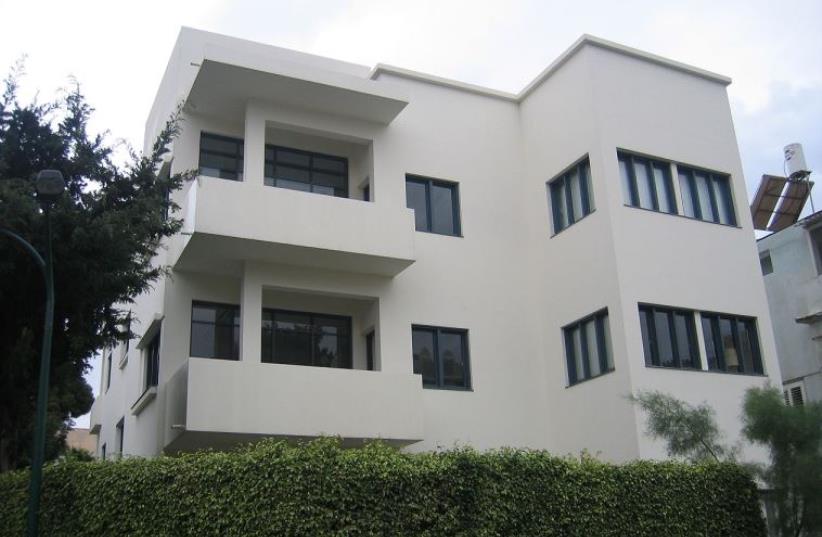 Bauhaus building in Tel Aviv
(photo credit: TALMORYAIR/WIKIMEDIA COMMONS)
Advertisement
A proposal to improve conditions for renters received the approval of the Ministerial Committee for Legislation Monday.The “Fair Rental Bill” by MKs Stav Shaffir (Zionist Union) and Roi Folkmann (Kulanu) bars landlords from raising rent for three years, and mandates that even once they can increase it, it cannot be by more than 2 per - cent per year, even if there is a new tenant. In addition, land - lords may not terminate a contract without cause.The bill’s explanatory portion states that it seeks to bring stability to renters’ lives, allowing them to live in the same place for several years and preventing landlords from making renters choose between a much higher rent that does not necessarily match prices on the market, and the cost and trouble of moving.The legislation would also establish a registrar for rentals, to which landlords must submit details of rental contracts within a month of singing them. The database will be open for public perusal, so that potential renters can check previous contracts for an apartment in which they are interested.If it becomes law, it will be the first time the law defines minimal conditions for a space to be considered fit to reside in.According to the legislation, a habitable apartment is fully constructed and has a kitchen, at least one bathroom – with a sink, toilet, and shower or bath – drinking water, hot water, drainage and sewage disposal, electricity, lighting, and openings – such as windows – for light and air, including a door that must be lockable.The renter must be able to freely access the apartment, which cannot unreasonably endanger his or her safety or health and may not be smaller than 26 square meters.In addition, landlords will have to make sure any serious repairs necessary to the property take place within a month of the renter informing him or her of the problem. However, tenants will have to fix minor damages on their own, along with any damage resulting from unreasonable use of the apartment.Shaffir, one of the leaders of the 2011 protests against high housing prices, rents an apartment in Tel Aviv and described the bill as the fruits of a years-long battle to help two million Israeli renters.“Public battles can bring awareness and a real change,” she said.Folkmann said “as a member of the Kulanu faction, I believe in the free market and competition, but when there is a failure in the market, we as lawmakers must intervene and fix it.”He lamented that “rental prices in Israel have soared in recent years, and a roof over one’s head has gone from a basic right to a luxury.”The bill “is a complementary measure to the housing reform the finance minister is leading, and this proposal was written with his support.”