Offsetting is a common practice in the Knesset by which an MK in the opposition will come to an agreement with a colleague in the coalition to cancel out each other’s absence. 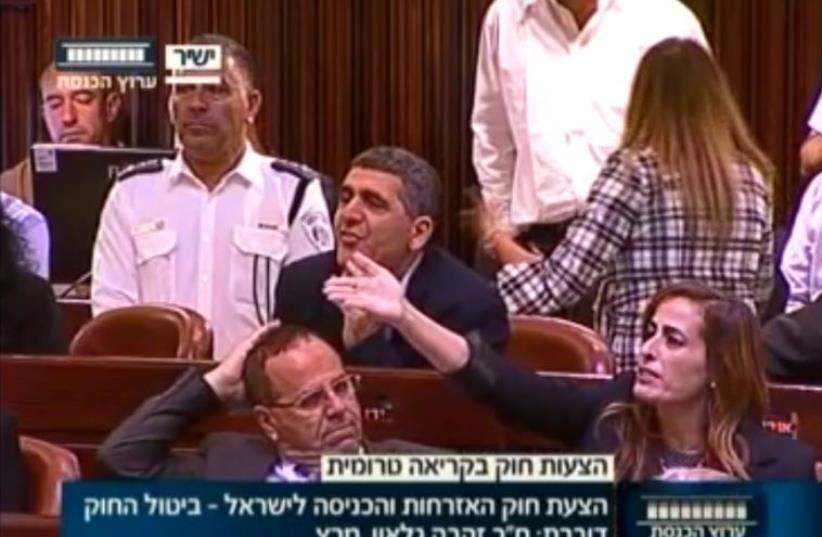 Israeli Knesset members arguing in parliament.
(photo credit: screenshot)
Advertisement
MKs will be able to continue offsetting each other’s absences without making their agreements public, after the Ministerial Committee for Legislation rejected a bill to that effect on Sunday.Offsetting is a common practice in the Knesset by which an MK in the opposition will come to an agreement with a colleague in the coalition to cancel out each other’s absence, for reasons that can range from illness, to a family event such as a wedding or bar mitzva, or even giving an interview to the press.The practice brings together strange bedfellows, like the Joint List and members of the Right, to the extent that several years ago, the Cameri Theater even produced a play called Offset, about the equivalent of a Bayit Yehudi lawmaker having an affair with what was meant to be a Meretz MK, and they offset each other’s absence in votes.MK Michal Rozin (Meretz) proposed to make offsetting an official and transparent practice, with lawmakers reporting their agreements, instead of making casual ones in the hallways of the Knesset.According to Rozin, by not making the practice transparent, the public cannot oversee how its representatives behave in different votes.“What do our ministers have to hide?” she asked after the legislation was rejected.“Since when are we a country in which criticism and public transparency are feared by our representatives?” Rozin said the rejection of the bill “raises serious suspicions,” because “the system of offsetting is completely hidden from the public’s eyes and is a dangerous, built-in opening for inappropriate behavior in the work of elected officials.”