Galant: Prosperity of the Arab sector is in the interest of Israeli society as a whole. 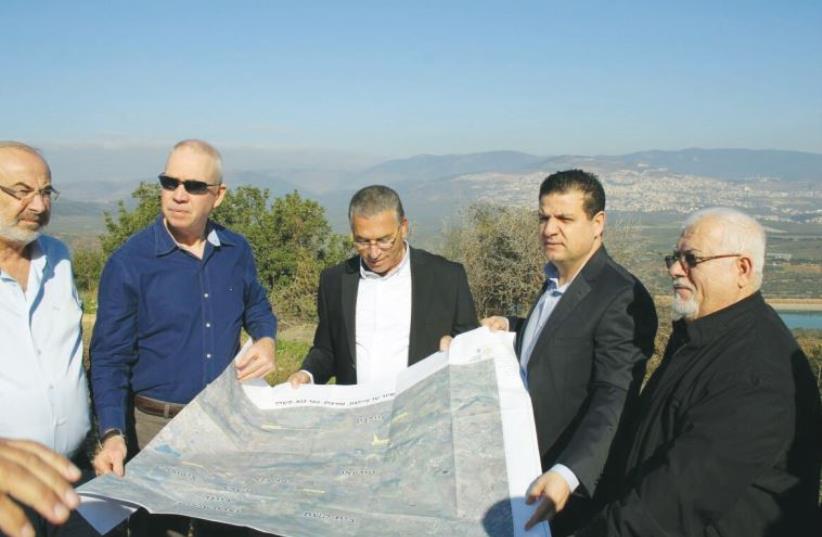 CONSTRU CTION MINISTER Yoav Galant (second from left) and Joint List leader Ayman Odeh (second from right) discuss Arab-housing development plans with leaders of the community in the North yesterday.
(photo credit: JOINT LIST)
Advertisement
Construction Minister Yoav Galant said Tuesday the ministry had formed a special section to deal with the problem of insufficient housing in the Arab and minority communities of the country’s North.“In the coming years, thousands of housing units will be built in the Arab sector. A special section [in the Construction Ministry] has been established to implement projects in minority communities,” Galant said while touring the Galilee with Joint List Chairman Ayman Odeh.The section will work to implement a previously announced plan with an estimated budget of NIS 10 billion-15b. to increase funding for housing, education, employment of Arab women, infrastructure, welfare services and public transport. In the first stage, more than NIS 1b. would be devoted to projects focused on building and marketing housing units and removing obstacles, he said.“Prosperity of the Arab sector is in the interest of Israeli society as a whole,” Galant said Tuesday.The program is part of the government-approved proposal by Prime Minister Benjamin Netanyahu, Finance Minister Moshe Kahlon and Social Equality Minister Gila Gamliel to promote a comprehensive program of economic and structural development in the Arab sector.The special section in the Construction Ministry is devoted to finding solutions for minority populations and will coordinate implementation of development plans for the Arab sector with local authorities.Galant and Odeh had a firsthand look at the situation on Tuesday as they visited Turan, Kafr Kana, Mash’had and Eilabun.Imad Dahle, the head of the municipality of Turan, told The Jerusalem Post his meeting with Galant went well and that the construction of 1,000 housing units is scheduled to be completed in a month.He also discussed with Galant the development of an additional 10,000 hectares (24,710 acres) of open land into residential and industrial areas, requesting the minister build infrastructure and provide marketing support to build on the land.“If the quality of life, employment, and education is not improved, then there won’t be progress,” Dahle said.Dahle, who has led Turan for two years, plans on doubling the village’s size by adding another 2,500 private homes.Currently, Turan, a majority Muslim village with a 15 percent Christian population, has 14,000 residents and 3,000 housing units.Odeh said he and Galant discussed with mayors ways to implement building according to the recently approved government plan.“There is a real problem of unauthorized construction, a problem that stems mainly from government barriers on construction and development in Arab towns,” he said.