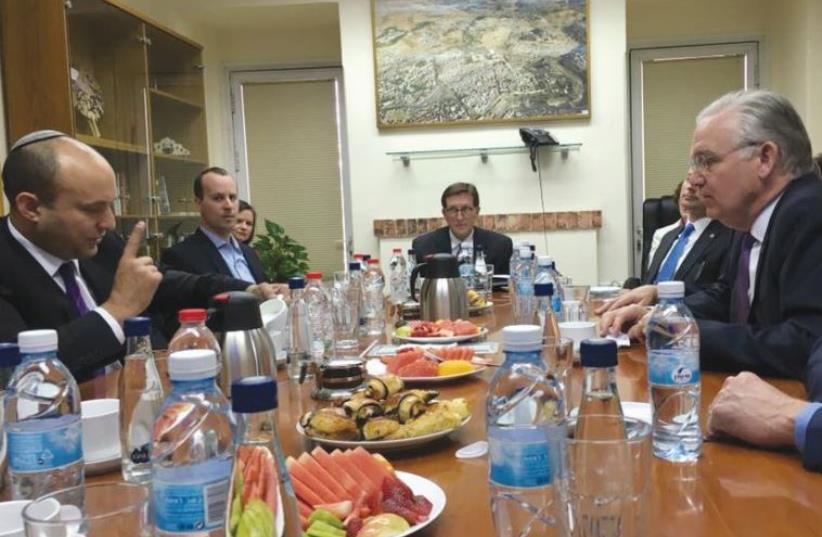 MISSOURI GOVERNOR Jay Nixon (R) and his delegation of state government leaders meet with Education Minister Naftali Bennett
(photo credit: Courtesy)
Advertisement
Missouri Governor Jay Nixon arrived in Israel Monday on a week-long trade mission, leading a delegation of state government leaders focused on strengthening partnerships, increasing exports and recruiting new hi-tech foreign investment to the Show Me State.In 2014, Nixon signed legislation establishing a Missouri trade office in Israel, and this week’s trade mission is intended to further boost ties.“Over the past few years, Missouri has become a globally- recognized hub of hi-tech jobs and entrepreneurship, and recently led the nation in new business creation,” Nixon said. “This trade mission is an opportunity to strengthen Missouri’s ties with a vital US ally, encourage even more hi-tech investment in our state, and bolster Missouri’s reputation as a leader in technology and innovation worldwide.”In Jerusalem, the governor and members of the delegation will meet with high-level government officials, including Prime Minister Benjamin Netanyahu, former president Shimon Peres and Foreign Ministry officials. Nixon will also meet with the heads of Mobileye Vision Technologies, a global leader in advanced collision avoidance systems, and with leaders of the Jewish Agency for Israel about their humanitarian efforts, which are supported by the Jewish Federation of St. Louis.The delegation will then travel to Tel Aviv, where the governor will meet with US Ambassador Dan Shapiro as well as companies in Israel’s tech sector including Amdocs, which is headquartered in Missouri.The governor will also participate in a forum hosted by Israel’s Start-Up Nation Central about the country’s start-up ecosystem and hear presentations by a number of Israel-based cyber security companies.Nixon’s delegation will also visit Israel’s Volcani Institute to meet with agri-technology companies and explore opportunities for mutually beneficial partnerships and growth in the bioscience sector. Nixon will meet with executives at Boeing Defense, which is headquartered in St. Louis and is Missouri’s largest manufacturer.The Israel Air Force currently employs all versions of the Missouri-made F-15 Eagle.This weekend, Nixon and his wife will meet with Theophilos III, Patriarch of the Holy City of Jerusalem and attend Easter services at the Church of the Holy Sepulchre.Roey Gilad, the Consul General of Israel to the Midwest, and Andrew Rehfeld, president & CEO of the Jewish Federation of St. Louis, are accompanying the governor.