"Dayan is a settler who is ideologically committed to the development of the settlements – a policy Brazil recognizes as illegal under international law," lawmaker writes. 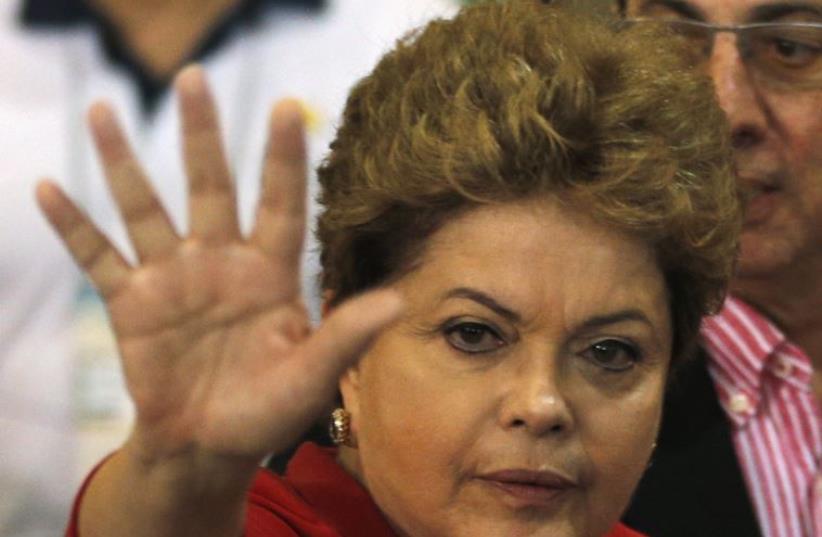 Brazilian President Dilma Rousseff
(photo credit: REUTERS)
Advertisement
Joint List MK Yousef Jabareen sent a letter to Brazilian President Dilma Rousseff on Thursday not to approve Israel's appointment of settler leader Dani Dayan as Israel’s envoy to Brazil.Dayan, who lives in the West Bank, is a former head of the Council of Jewish Communities in Judea, Samaria and the Gaza Strip.  "Dayan has consistently acted with blatant disregard for international law and norms, and has been spearheading various initiatives that directly violate the Palestinian people’s basic rights," Jabareen wrote in his letter to Roussef.  Jabareen quoted from a New York Times opinion article that Dayan wrote in 2012 in which he defended the expansion of the settlements in the West Bank.  "Dayan is a settler who is ideologically committed to the development of the settlements – a policy Brazil recognizes as illegal under international law," Jabareen wrote."Approving his appointment as ambassador would legitimize his criminal ideology and practices, and send a resounding message that Israel’s oppression of the Palestinian people has no consequences in the international arena," he added. Earlier this week, leading Israeli politicians defended the Dayan appointment. Just as Brazil never boycotted Knesset Speaker Yuli Edelstein even though he lives beyond the Green Line, so too it should not scuttle the Dayan appointment because of where he lives, Edelstein’s diplomatic adviser told the Brazil ambassador on Tuesday.Edelstein’s message, delivered by Oden Ben-Hur, came after three former Israeli diplomats – including former Foreign Ministry director-general Alon Liel – worked behind the scenes and lobbied Brazil to oppose the appointment of Dayan, saying his appointment would be seen as legitimizing the settlement enterprise.The message from Edelstein said that Dayan was a very suitable candidate for ambassador, and slammed the attempts by the former diplomats to torpedo the move.Zionist Union and Yesh Atid leaders Isaac Herzog and Yair Lapid also spoke to the Brazilian envoy urging Brasila accept Dayan’s appointment.Herzog said that Dayan is a respected public figure and should be welcomed in Brazil, and Lapid said on Twitter that while he does not agree with Dayan on many issues, he would make a “terrific ambassador.”Regarding the efforts of the three former diplomats to scuttle the move, Lapid wrote, “I don’t accept it that Israelis are trying to use influence abroad to overturn an elected government’s decisions.” In August, a number of Palestinian, Islamic and left-wing NGOs sent a petition to Rousseff against Dayan’s appointment. A Foreign Ministry spokesman at the time said that despite the petitions, Israel expected his candidacy would be accepted.According to protocol, a host nation can reject the appointment of an ambassador, but this is something that happens only very rarely.In 1997, Turkey rejected Israel’s ambassadorial appointment at the time, Ehud Toledano, because of alleged comments he made regarding the Armenian genocide.

Gil Hoffman and Herb Keinon contributed to this report.