An overwhelming majority of Czech MPs rejected the labeling move, saying that labeling is reminiscent of Nazi Germany and that it would be punishing the only democracy in the Middle East. 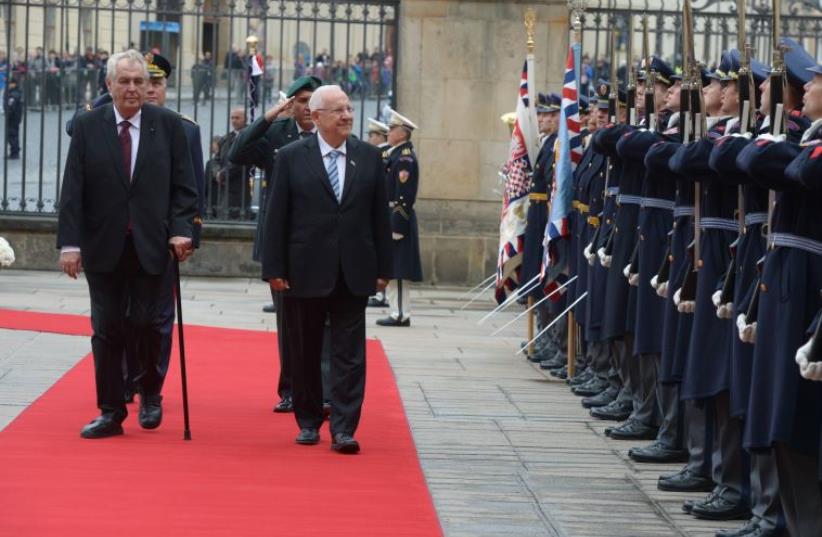 CZECH PRESIDENT Milos Zeman welcomes President Reuven Rivlin at Prague Castle
(photo credit: MARK NEYMAN / GPO)
Advertisement
The Czech Parliament’s rejection of the EU directive to label products from the West Bank, Golan Heights and east Jerusalem is a sign of the strong relationship between the Czech Republic and Israel, MK Aliza Lavie, chairwoman of the Israel-Czech Parliamentary Friendship Association wrote to her Czech counterpart, MP Robin Bohnisch.In her letter to the chairman of the Czech Republic-Israel Parliamentary Friendship Association, Lavie thanked him for his “pioneering struggle against the boycott of Israel and… standing firm on our side,” saying the vote against labeling “strengthens us immensely.”The Czech Parliament voted against the EU guidelines last week by an overwhelming majority, with MPs saying labeling is reminiscent of Nazi Germany and that it would be punishing the only democracy in the Middle East.“Relations between states are measured not only on the highlights, but also in times of crisis and difficulty. Your position is the result of a strong relationship between our two countries, which is the result of fruitful dialogue and cooperation – which will continue to be strengthened and bear fruit,” Lavie wrote.Lavie said Israel is fighting boycotts that harm both Jewish and Arab Israelis, and that harming civilians’ income is not a solution to a conflict.“A ban on the products is morally wrong and is not practical or correct in an attempt to achieve our shared objective – peace,” she added.The EU guidelines do not ban products from the West Bank, Golan Heights and east Jerusalem, rather, they require them to not be labeled as produced in Israel.Labeling is mandatory for fresh fruit, vegetables, wine, honey, olive oil, eggs, poultry, organic produce and cosmetics.For packaged food and other products, it is voluntary, unless its omission misleads the consumer into believing that the product was produced in parts of Israel recognized by the EU.Enforcement of labeling is the member states’ responsibility and infringement proceedings may be held if the decision is not enforced.