MK to Mogherini: Trust-building steps will be easier when terrorism stops 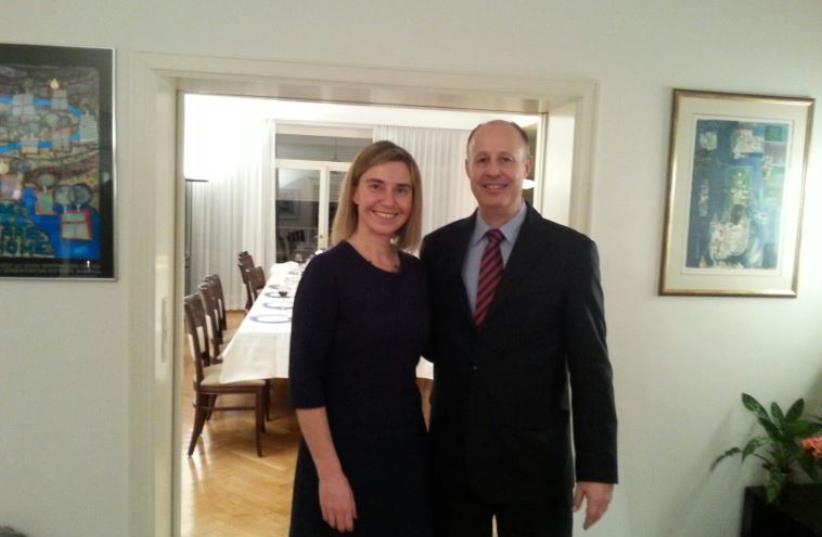 Likud MK Tzachi Hanegbi and EU foreign policy chief Federica Mogherini
(photo credit: KNESSET SPOKESMAN'S OFFICE)
Advertisement
Members of the Knesset Foreign Affairs and Defense Committee discussed peace and security with European officials in Brussels this week.In a meeting with EU foreign policy chief Federica Mogherini Tuesday evening, Foreign Affairs and Defense Committee chairman Tzachi Hanegbi (Likud) said: "When the wave of terrorism ends, it will be easy to promote trust-building steps [between Israel and the Palestinians]."MK Ya'acov Peri (Yesh Atid), however, disagreed, saying that "even small steps can prove Israel's intentions to the world."The group, which also included MKs Merav Michaeli (Zionist Union) and Michael Oren (Kulanu), met with the European Parliament Foreign Affairs Committee, including chairman Elmar Brok, as well.Hanegbi emphasized to the panel that "Israel is the only democratic anchor in an unstable Middle East.""Israel is in a wave of terrorism that is not leading us anywhere," he stated. "There is no Israeli who does not want peace with the Palestinians, but in order to get it, we have to return to the negotiating table and discuss all of the disagreements."That will only be possible, Hanegbi posited, when "there is a brave leader on the other side who will openly agree to give up the Palestinian right of return to Israeli territory."Pressure on Israel, such as by labeling products from the West Bank as the European Commission required, are not helpful to bringing peace and discourage Palestinian Authority President Mahmoud Abbas from returning to the negotiating table, according to Hanegbi. The Likud MK said that, while Hezbollah is currently focused on Syria, it is prepared to fight Israel and there is no way of knowing when the quiet on Israel's northern border will be disturbed.Hanegbi added that Israel provides humanitarian aid to Syrians as best as it can, and called for Syrian President Bashar Assad "to be removed from his job, since he was responsible for mass murder."On the topic of Iran, Hanegbi said that the world powers' agreement with the Islamic Republic is bad, but since it was signed, the West will have to make sure Teheran sticks to it.On Wednesday, the MKs met with Belgian Foreign Minister Didier Reynders, and discussed with him the phenomenon of European nationals fighting in Syria returning to Europe.Reynders expressed sympathy with Israel in light of the wave of terrorism, and said that Belgium and its Jewish community have to deal with an increase in violence, as well, which is why the Belgian government increased security around Jewish institutions.Hanegbi told Reynders that the last round of talks with the Palestinians "ended when the Palestinians left the negotiating table, while Israel agreed to make difficult concessions."The Palestinians have to recognize that the solution to their refugee problem cannot be in Israeli territory. That is a necessary condition for reaching peace," Hanegbi said.Oren said of the meetings in Brussels that "while expressing their deep friendship for Israel, our European hosts also stressed their opposition to Israeli settlement-building and to the proposed NGO bill."The Kulanu MK urged Europe to be more even-handed in the peace process."When singling out Israel for criticism," he said, "you're confirming the impression among many Israelis that Europe is merely continuing its 2,000-year-long history of anti-Semitism."The MKs also participated in a memorial ceremony for the victims of the 2014 terrorist attack at the Jewish Museum in Brussels.