MKs, Christians and Israel supporters come together at the Knesset to condemn BDS 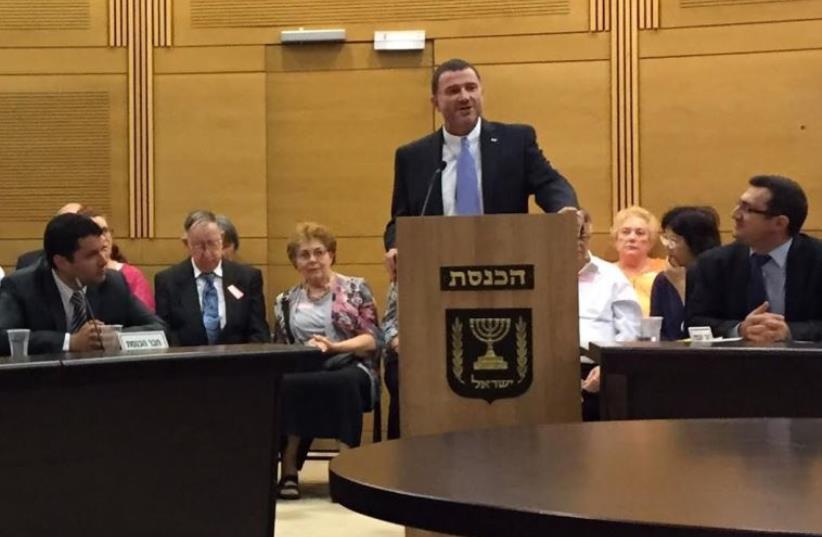 Left to Right: KCAC Director Josh Reinstein, Speaker of the Knesset Yuli Edelstein, Chairman of the KCAC MK Robert Ilatov
(photo credit: RENEE SHARON)
Advertisement
Knesset members and Israel supporters alike came together to condemn the language of the BDS Movement and to thank the Christian community for its ongoing support at a gathering at the Knesset on Monday.The Knesset Christian Allies Caucus and the Delegitimization Caucus organized the event to discuss the “Defeat BDS” campaign, which has helped to enact anti-BDS legislation in 12 US states.Along with speeches from several MKs, the event featured two key speakers: Joseph Sabag, a US leader in the fight against BDS with the Israel Allies Foundation, and Eugene Kontorovich, a professor at Northwestern University and an expert on the Arab-Israeli conflict.“The Delegitimization Caucus is here to fight the threats that generations and generations have brought against us, but the Christian supporters are here because they realize it’s God that has defended Israel and delivered us from their hands,” said Josh Reinstein, director of the Knesset Christian Allies Caucus.“It’s exciting to see both caucuses together. This is a first. We’ve never seen this before,” he said.The Christian community has a long-standing history with Israel and the anti-BDS campaign, and many of the MKs made it a point to thank the community for its contributions to Israel.“We seem to take things for granted,” Likud MK and member of the Knesset Christian Allies Caucus Yehuda Glick told the Christian attendees.“Your friendship is not something to take for granted. We should never take it for granted.”Several of the MKs, as well as some of the other speakers, cited language as one of the main issues with the anti- BDS campaign. They believe that when Israel supporters use terms like “occupy” and “apartheid” to explain BDS they are feeding into the narrative created by the anti-Israel movement.“Language has been weaponized against us, simply by the use of the term occupation itself, which you’ll find is used by more than enough of Israel’s own media outlets and institutions and even more so through the casual and common use of other related terms,” said Sabag. “Those who support Israel should not use the terms that paint Israel as an occupier.”The speakers at the event didn’t just focus on Israeli- Christian relations, but also spoke about the Muslim community, its contributions to Israel, and how it is effected by radical Islam.“In the past 70 years the greatest victims of Islamist terrorism are Muslims,” said Glick. “Every single day we have people being killed in Syria and Libya and Yemen.Therefore, we have to strengthen moderate Muslim leaders. We have to strengthen them and their voices.”Despite the anger that the speakers and attendees expressed toward BDS, the overall message of the event was that the future looks positive. There was a general excitement over the 12 states that passed the anti-BDS laws, with many stating that they believe even more states will follow suit in the near future.