Aldrin in Israel: Mars an ‘island awaiting us in the blackness of space’

Aldrin was speaking at the Technion–Israel Institute of Technology in Haifa last week as part of the SSP2016 session held there by the International Space University. 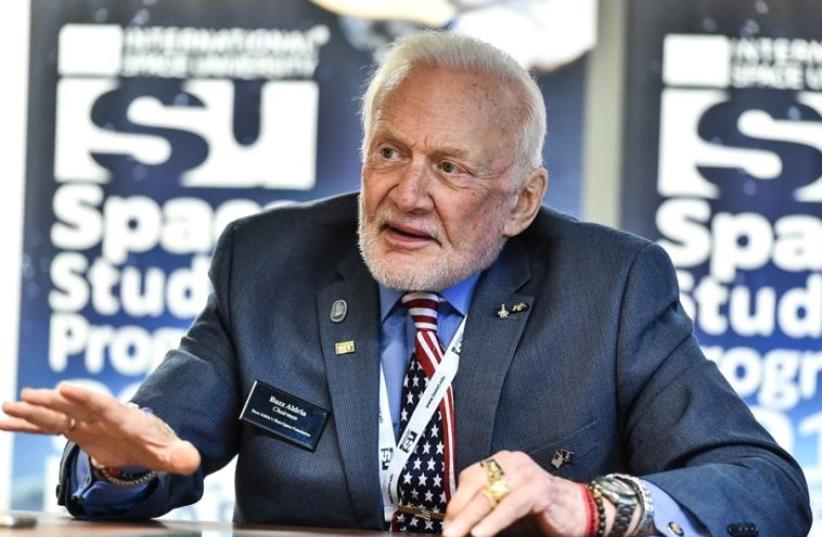 US astronaut Buzz Aldrin at Technion–Israel Institute of Technology in Haifa
(photo credit: TECHNION)
Advertisement
A permanent settlement should be established on Mars rather than making it a place to just visit, said Buzz Aldrin, the second man to walk on the moon.Aldrin was speaking at the Technion–Israel Institute of Technology in Haifa last week as part of the SSP2016 session held there by the International Space University. A West Point graduate and former fighter pilot, he is currently serving as chancellor of the ISU. The lecture was dedicated to the memory of Gerald Soffen, one of the ISU’s biggest supporters.“I have no doubt that I am lucky,” Aldrin, who has a PhD in astronautics, said. “My mother was born the year when the Wright brothers made the first flights in history, and my father was a pioneer in the world of aviation. I just flew jets in the Korean War and made spacewalks, and yet – I got to go to the moon.”Aldrin, who was born in January 1930 in New Jersey as Edwin Eugene Aldrin Jr., is best known as one of the first two astronauts who set foot on the moon, along with the late Neil Armstrong. The younger generation is also familiar with him thanks to Buzz Lightyear – hero of the movie Toy Story – who was named after Aldrin.The first landing on the moon – of Apollo 11 – took place 47 years ago this month, on July 20, 1969. Mission commander Armstrong descended from the landing module to the moon, followed by Aldrin, who described the scenery as “magnificent desolation” – as he later called his autobiography.They placed the US flag and a commemorative plaque on the moon, carried out a few predetermined scientific experiments and spoke with then-president Richard Nixon.They later returned to Columbia – the command module – where fellow astronaut Michael Collins had been waiting for them, orbiting the moon while they were on it.Aldrin earned his doctorate in 1963 from the Massachusetts Institute of Technology after writing a thesis on manned rendezvous in space.The methods he developed in his thesis and afterward are still in use today and earned him the nickname Dr. Rendezvous.Later that year, he was accepted into the ranks of the National Aeronautics and Space Administration as an astronaut, where he first became known for his record-breaking Gemini 12 spacewalk in 1966.Apollo 11 was the peak of the moon-landing program, announced by US president John F. Kennedy in a famous speech in which he set the goal of landing a man on the moon before the end of the decade. Kennedy, assassinated in 1963, did not live to see his dream realized.More than half a billion TV viewers followed Armstrong live as he descended the ladder of the lunar landing module and said: “That’s one small step for man, one giant leap for mankind.” Aldrin descended about 20 minutes later, and together they carried out the predetermined tasks, including walking on the moon, collecting soil samples, installing a TV camera to broadcast images to earth, and placing a plaque bearing a message of peace to any living creatures who might later find it.Four days later, on July 24, 1969, Apollo 11 landed in the Pacific Ocean.“We were given an opportunity to land on the moon, and the opportunity became a landmark event that changed the history of mankind,” Aldrin said at his Technion lecture. “Mankind has managed to set foot in a new and completely different place.Four hundred thousand people were involved in the success of this mission, and a half billion were watching us making history. When we returned from there, we were greeted as heroes, but the world cheered not only us, but what we represented – conquering the impossible.”For the past three decades, Aldrin has spent most of his time on the next mission: populating Mars.“I’m not talking about a visit to Mars, or about occupation or even about having people coming and going to Mars,” he said. “I’m talking about a permanent presence. My plan presents a defined path to mankind’s next home.”To this end, he founded Florida’s Buzz Aldrin Space Institute, which is working to promote settlement on Mars, with the target year being 2040.“Mars is the island awaiting us in the darkness of space,” he said. “Because there, as president Kennedy said about the moon-landing mission, a rendezvous with destiny is awaiting us.”Prof. Finn Gurfil, head of the Asher Space Research Institute at the Technion, thanked Aldrin for coming.“People ask, Why invest in space, and the answer lies in an entire generation that grew into engineering and science thanks to space,” Gurfil said.“The Technion is also involved in many aspects of space exploration, because this is our commitment: to make the hidden visible, and to make the unknown known.”The ISU was founded in 1987 in Massachusetts and currently operates from Strasbourg, France. It is supported by major space agencies and aerospace organizations from around the world.