Most Israelis believe a divided capital is already a foregone conclusion 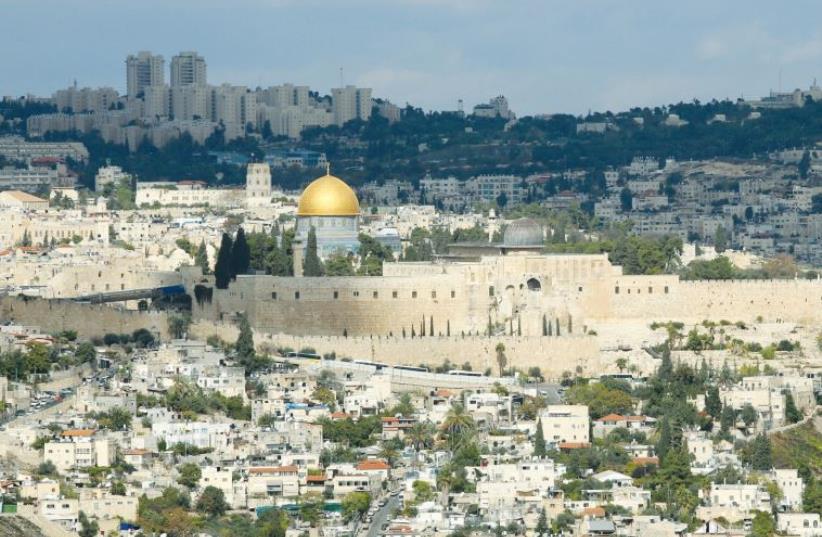 A view of the Dome of the Rock in Jerusalem
(photo credit: MARC ISRAEL SELLEM/THE JERUSALEM POST)
Advertisement
As the debate over whether to divide the capital intensifies amid terrorist attacks that have politicians and security personnel scrambling for solutions, most Israelis believe that the model of a unified Jerusalem has failed, a poll found this week.The Israel Democracy Institute conducted the survey by telephone interview with 600 Jewish and Arab Israelis from February 28 to March 1, constituting a representative national sample of the adult population.With a maximum sampling error of 4.1 percent, and a confidence level of 95%, the surveyors repeated a question first posed to Israelis in 1999: “Do you agree or disagree with the opinion that Jerusalem is actually already divided into two cities – East and West?” A clear majority of Jewish Israelis (61%) agreed that Jerusalem is divided into a western and eastern city, while in 1999 the 44% of respondents thought so, while 49% disagreed.Approximately 47% of Arab Israelis said the capital is divided, according to the current survey.The survey found opinions largely drawn along political lines, with the highest proportions of those who said the city is divided coming from members of the Zionist Union (88.5%) and Meretz (85%), while Likud voters were split on the question (49% for each view).Last month, Zionist Union and opposition leader Isaac Herzog proposed dividing the capital, when he presented a diplomatic plan at the Jerusalem Conference to relinquish Arab neighborhoods to the Palestinian Authority to improve security.However, Jerusalem Mayor Nir Barkat (Likud) has repeatedly rejected any division of the capital.As for a connection between discrimination against Arabs and terrorism, a majority of the Israeli Jewish public (57%) says there is no connection between discrimination in the areas of healthcare, education and other services against Arab Israelis and Jerusalem Arabs’ recent involvement in attacks against Israeli Jews.Still, a majority of Israeli Arabs (52%) disagree. They report that there is indeed a connection between discrimination against them and terrorism.The survey also studied questions regarding the security situation, which began to deteriorate last October.When Jewish Israelis were asked whether they agreed with a statement made in late February by Police Commissioner Insp.-Gen. Roni Alsheikh, that “the Palestinians sanctify death while we sanctify life,” an overwhelming majority (77%) strongly or moderately agreed.Similarly, a sweeping consensus (90%) of the Jewish public thinks the IDF is operating in a “very or moderately moral fashion” in counteracting the current terrorist attacks.Finally, the IDI study found that 50% of the Jewish public disagrees with the recommendation by Chief of Staff Lt.- Gen. Gadi Eisenkot that restraint should be applied in acting against the terrorists.