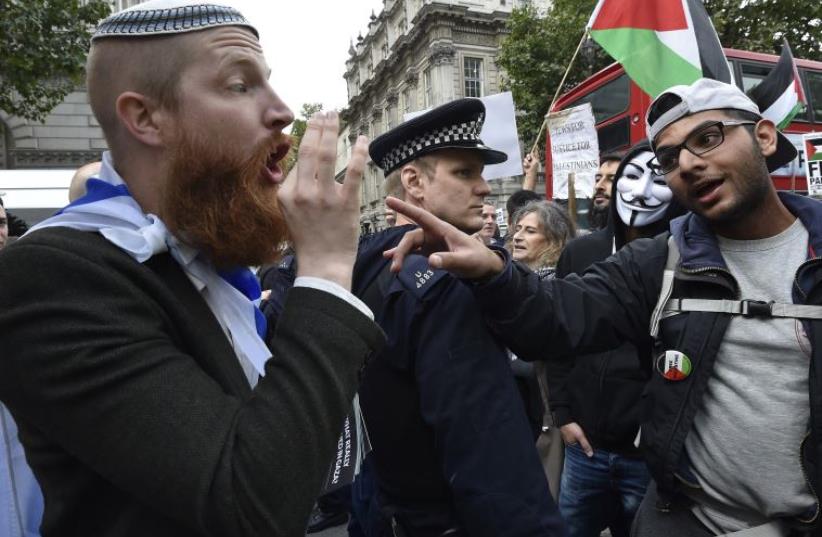 Supporters of Israel and the Palestinians argue during a demonstration in London
(photo credit: REUTERS)
Advertisement
Anti-Semitism is allowed to exist unchallenged in some quarters of the British Left, Alex Wickham, news editor for right-wing British political blog Guido Fawkes, said Wednesday.Wickham first reported on many of the Labor Party members and officials who posted anti-Semitic statements on social media.According to Wickham, such views are prevalent on the “pro-Palestine Left.”“A lot of these people may make legitimate criticism of the Israeli government, and there’s nothing wrong with that, but there’s clearly a nasty undercurrent that’s anti-Semitic and oversteps the line from criticism of policies into hatred of Jews. That’s what we’ve seen over the past few weeks,” he said.The statements that have led to Labor members’ suspensions, Wickham explained, “are not people saying ‘I disagree with the Israeli government on xyz,’ it’s about Jews and Hitler, which is something completely different.”Wickham expressed skepticism about Labor leader Jeremy Corbyn’s ability to combat anti-Semitism in his party’s ranks.“The problem with the Labor party is their party leader is a member of the pro-Palestinian far left, and that only encourages this kind of thing. They have a leader like Corbyn who has said things like Hamas and Hezbollah are his friends, and has a really poor record on standing up to Islamic extremists and anti-Semites. He defended them and shared platforms with them.“When you have someone like that in charge, it’ll only encourage this view to be prevalent,” Wickham posited.Asked about Corbyn’s move to suspend Labor members and his appointment of an inquiry into the incidents, Wickham said the party leader “recognized he has to at least be seen to be doing something.”At the same time, Wickham said that Corbyn denied his party has an anti-Semitism problem, calling the denial “laughable, as it demonstratively does.”“For [Corbyn] to still be insisting nothing is wrong raises questions about how seriously he’s taking it,” he added.Some of Labor’s defenders have questioned the timing of the revelations of members’ anti-Semitism, in light of the mayoral election in London taking place on Thursday, but Wickham said the connect is “a stretch.”“We’ve been doing these stories for the past two or three months, and it’s been bubbling under the surface,” he said. “There’s been a steady stream of Labor members, councilors at a fairly junior level, who have made anti-Semitic and inflammatory comments. I really kicked off last week, when we found a Labor MP [Naz Shah], a much more senior person, had shared a graphic saying Israelis should be transported to America.”Shah’s suspension was what brought the story to the fore, with international coverage.“It’s the only story in town, really,” Wickham said. “Unless they do something, it’ll just go on and on with so many of these people coming out of the woodwork.”