As the wife of the president, Nechama Rivlin has focused primarily on the environment, nature and children with special needs. 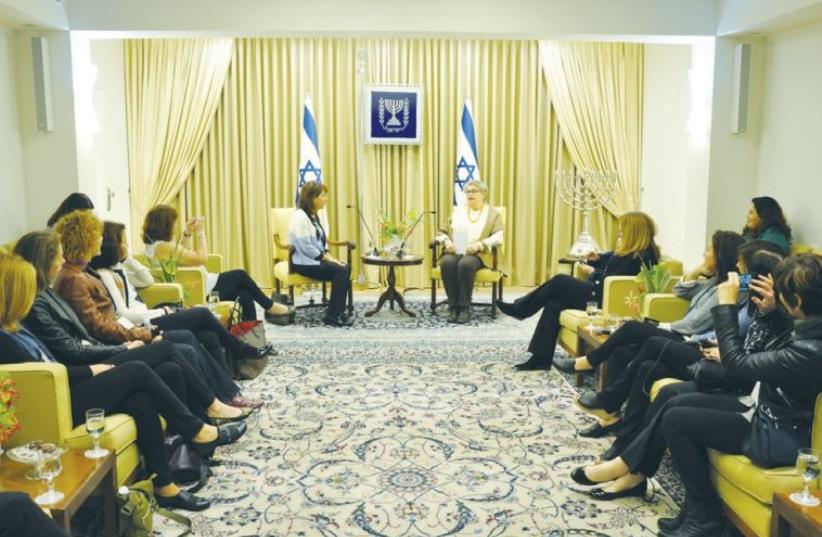 NECHAMA RIVLIN (center right), wife of the president, meets at the official residence with women leaders from the UJA Federation of New York
(photo credit: PRESIDENT'S RESIDENCE)
Advertisement
Though very excited on her husband’s behalf when he won the presidential elections just under 18 months ago, she never imagined that this would make her a public figure as well, Nechama Rivlin on Wednesday told a visiting delegation of a dozen women leaders from the UJA Federation of New York.Rivlin said that while people refer to her as the First Lady, she prefers to be known as the wife of the president. She told the women about her background as the daughter of pioneers and of growing up with a love for nature on a moshav. She later studied botany, biology and zoology at the Hebrew University.She also spoke of developing her love for art, both classical and modern, following her retirement and mentioned her three children and numerous grandchildren. She was likewise very frank about the severe respiratory illness which necessitates her having an oxygen tank close at hand.Rivlin commented on the restrictions that have been placed on her since the wave of stabbings in Jerusalem began.Whereas she could move around freely without a bodyguard before, she is now enveloped in security, which means that she can’t go out as much as she used to, which she finds very frustrating.Security also dictates that family celebrations be confined to the President’s Residence. Thus next week when the Rivlin clan will be celebrating the sixth birthday of Carmi, one of the Rivlin grandchildren, the festivities will take place not where the grandchild lives, but where the grandparents live.Rivlin revealed that she had always thought that her parents came from Ukraine, and had only recently discovered while visiting Beit Hatfutsot that they were from Galicia. Beit Hatfutsot was in the process of preparing an exhibit about Galicia and the curator asked about Rivlin’s origins. When she said her parents came from Tarnopol in Ukraine, she was told that Tarnopol is not in Ukraine but in Galicia.As the wife of the president, Nechama Rivlin has focused primarily on the environment, nature and children with special needs.She initiated a community garden in the grounds of the presidential complex so that neighbors – both children and adults – can come in to plant flowers, shrubs and vegetables, nurture them and watch them grow.She also hosts children with special needs, listens intently to their stories and said that she was always inspired by how they overcome their challenges.The women from New York were very interested in the paintings that adorn the walls of the President’s Residence.Most are by Reuven Rubin and other artists of his era. Rivlin was happy not to replace them with other works, because she said they are representative of the early years of the state.The women leaders told her that they are engaged in a variety of Israel-oriented projects, as well as local community projects aimed at connecting people with their Jewish identities, with Israel and with responsibility for their less fortunate fellow beings.Some of the projects they mentioned included Machshava Tova, a program in which computer vans travel to peripheral areas to train children, haredim, Arabs women, and anyone else they can help to be better equipped for study and job placement; Yad B’Yad which fosters coexistence between Jews and Arabs; promoting the Israel message on university campuses across America; running camps for children undergoing chemotherapy and inviting their siblings to come as well; supporting the Israel Trauma Coalition; pet therapy for adults; birthright, Edgarim which provides outdoor sports and recreational facilities for children and adults with physical and/or mental disabilities, especially IDF veterans; and an educational program about Israel for professors from New York universities who attend lunch-and-learn sessions which culminate in a trip to Israel.The women said that they are always interested in supporting new projects, especially those related to women’s empowerment and children at risk and they are also happy to partner with other organizations. Rivlin lauded the women for being great ambassadors for Israel, but also voiced regret that so many American Jews have not visited Israel even once.