Zamir was rumored to be favored by Netanyahu for the position of IDF Chief of Staff. 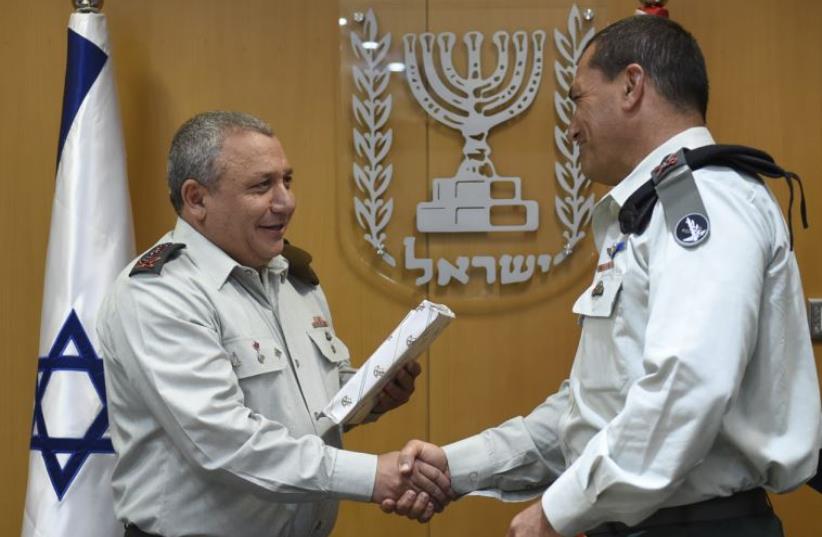 Newly appointed IDF Southern Command chief Maj.-Gen. Eyal Zamir (right) shakes hands with IDF Chief of Staff Lt.-Gen. Gadi Eisenkot.
(photo credit: IDF SPOKESMAN’S UNIT)
Advertisement
Prime Minister and acting-Defense Minister Benjamin Netanyahu approved the appointment of Maj.-Gen. Eyal Zamir as Deputy Chief of Staff of the IDF on Thursday.Zamir was appointed following the recommendation of incoming chief of staff Maj.-Gen. Aviv Kochavi.“Maj.-Gen. Zamir is an accomplished and valued officer who will help the appointed chief of staff Maj.-Gen. Kochavi, lead the IDF to new heights,” Netanyahu said following the announcement.Born in 1966, Zamir, who recently finished serving as the Head of the Southern Command, spent most of his career in the Armored Corps, commanding the 7th Armored Brigade as well the Ga’ash Division.He also held a number of key positions in the Ground Forces Command before serving as a military aide to Netanyahu. He was then appointed as Head of the Southern Command.Maj.-Gen. Nitzan Alon, the former head of IDF Operations and current officer in charge of the military’s efforts against Iran, was also interviewed for the position.Most of his career was in the elite Sayeret Matkal special forces unit and was appointed its commander in 1998. He held several positions in the IDF, and took command of the IDF’s Intelligence branch’s new Operations Division, which oversees special forces operations.In his statement Netanyahu thanked Alon “for his long-standing contribution to the IDF and to Israel’s security.”On Tuesday evening, the Senior Appointments Advisory Committee announced that it had approved Kochavi’s appointment to take over for outgoing Chief of Staff Lt.-Gen. Gadi Eisenkot, who is due to finish his term on December 31.The final vote to approve Kochavi as the 22nd IDF Chief of Staff is expected to be confirmed by the cabinet on Sunday.