Netanyahu at scene of terror attack: 'Third terrorist has been caught'

"In this place four innocent Israelis were murdered, and we honor their deaths," Netanyahu said. "This nation is strong and they will not stop us." 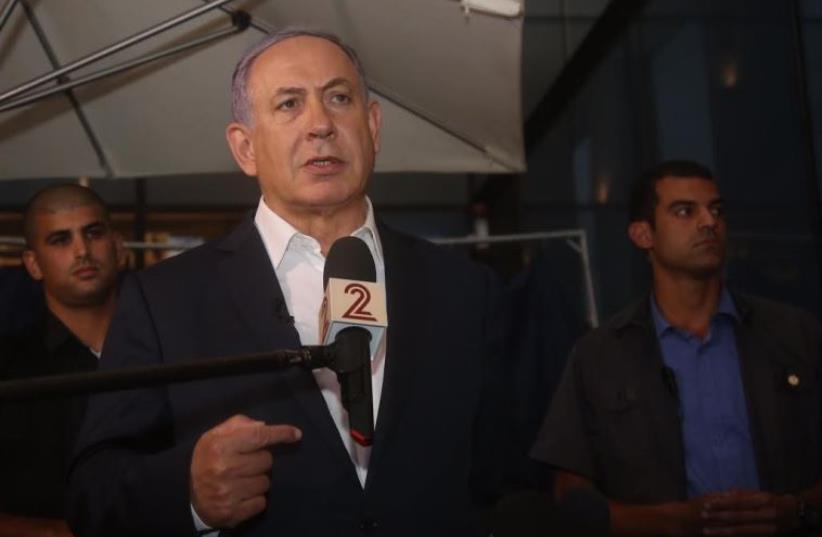 PM Benjamin Netanyahu speaking at Sarona Market, June 9 2016.
(photo credit: MARC ISRAEL SELLEM)
Advertisement
Prime Minister Benjamin Netanyahu visited the Max Brenner located in the Sarona complex Thursday evening in a show of solidarity with those who were effected by yesterday's terror attack. "In this place four innocent Israelis were murdered, and we honor their deaths," Netanyahu said. "This nation is strong and they will not stop us.""I know personally the pain their families feel," Netanyahu continued. "We stand with them, and wish the injured a speedy recovery."Netanyahu discussed the Cabinet meeting which he had convened earlier in the day, and said that he had supported harsher security measures. "We have conducted raids in Yata, [the hometown of the two terrorists involved in the attack] and had caught the third Palestinian who was an accomplice in the attack. We have restricted work permits for members of their family, and created a buffer zone around Tel Aviv," he continued.Netanyahu also criticized the Palestinian response to the attack, both among the leadership and among the people. "We did not hear condemnation from the Palestinian Authority, and there were celebrations in the West bank and Gaza. This is who we are up against," he said. "We will win."Earlier on Thursday, Defense Minister Avigdor Liberman visited the site of the attack in the Sarona Market shopping area and pledged to take action to halt further attacks.
“Rest assured I have no intention of simply relying on strong words,” he said.Liberman added that he applauded the courage of shown by the resident of Tel Aviv who woke up on Thursday and went about their normal day.
“They are proving that life is stronger than terror,” he said. and added, “I salute the people of Tel Aviv.”