Government to form committee to review the topic; Yisrael Beytenu MK says PM’s move shows he is not really right-wing. 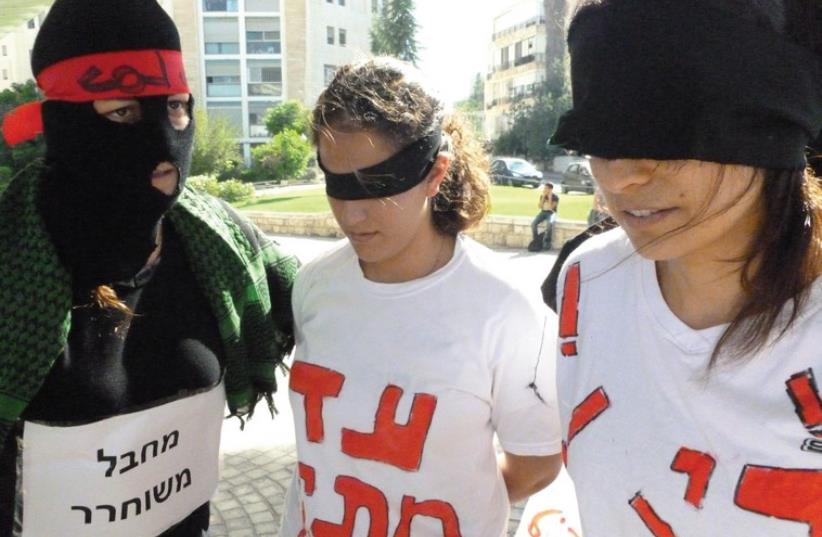 A right-wing protest in Jerusalem (file)
(photo credit: AVIVA LOEB)
Advertisement
The Ministerial Committee for Legislation on Sunday postponed by three months the vote on a Yisrael Beytenu bill making it easier to sentence terrorists to death, instead opting to form a committee on the topic.The current law gives judges an option of sentencing a terrorist to death, but only if there is a consensus between all the judges presiding over the case.
Netanyahu"s move to block death sentence bill‏
The bill by MK Sharon Gal (Yisrael Beytenu) would allow a majority of judges presiding on a case to decide on the death penalty. The legislation would apply to Israel within the Green Line and to Judea and Samaria, and would not allow the IDF to change the sentence for West Bank residents.As of Sunday morning, it seemed likely the Ministerial Committee for Legislation would approve the bill as Justice Minister Ayelet Shaked and Agriculture Minister Uri Ariel of Bayit Yehudi, as well as the Likud’s Immigration and Absorption Minister Ze’ev Elkin, Culture and Sport Minister Miri Regev, Science, Technology and Space Minister Danny Danon and Minister-Without- Portfolio in the Communications Ministry Ofir Akunis had all said publicly they supported capital punishment for terrorists, while Tourism Minister Yariv Levin was the only Likud minister who spoke out against it.Senior Citizens, Young People and Gender Equality Minister Gila Gamliel, also of the Likud, is in the US and planned not to participate, while Finance Minister Moshe Kahlon and Environmental Protection Minister Avi Gabai of Kulanu, National Infrastructure, Energy and Water Minister Yuval Steinitz of the Likud and Religious Affairs Minister David Azoulay of Shas did not state their position.However, in a meeting of Likud ministers, an overwhelming majority – including those in favor of the death penalty – supported Prime Minister Benjamin Netanyahu, who said such a serious topic should not be decided in a political committee, but rather that professional opinions should be taken into consideration.In addition, several Likud ministers said the coalition shouldn’t rush to give Yisrael Beytenu, an opposition party, a victory.Later, in the Ministerial Committee for Legislation, Shaked, the panel’s chairwoman, argued that the bill is a good one because current law only gives courts the option of sentencing terrorists to death, but they never use it and the bill would require them to.Justice Ministry representatives, opposing the minister, said the bill is problematic, because there is no proof that capital punishment is a deterrent.In addition, it is irreversible and the court could make mistakes.“Irreversible? It’s also irreversible when terrorists kill people,” Akunis retorted.The Justice Ministry pointed to the fact that the bill would apply to the West Bank, where Israel has military control, as problematic.Shaked argued against her ministry’s representatives, saying, “We never agreed to the definition of us holding Judea and Samaria belligerently. The courts never ruled on this matter and the state has never said so. We only voluntarily accepted that concept for humanitarian matters. The Land of Israel is ours.”Since the Likud has a majority in the Ministerial Committee for Legislation, the proposal to form a committee, which is to present its findings to the full cabinet in three months, was approved.Gal called the panel to review the death penalty a “time-wasting committee,” and plans to bring the bill to a preliminary vote in the Knesset Wednesday even though it is unlikely to pass without ministerial support.“The prime minister’s decision is further proof that this is not a nationalist government,” the Yisrael Beytenu MK said.“Just like this government has not acted to eliminate Hamas’s terrorist regime in Gaza, it also impeded the fight against terrorists in Israeli territories.”Meretz chairwoman Zehava Gal-On called on Netanyahu to completely bury the bill, so as not to “authorize murder sponsored by the law.”“The proposal to sentence terrorists to death does not reflect Jewish morals or democratic values. Killing out of revenge is wrong and has nothing to do with justice,” she added.Last week, Gal-On proposed a bill that would cancel the option of the death penalty, which exists under Israeli law but was used only by a civil court in 1962 against SS officer Adolf Eichmann.Israel Democracy Institute president Yohanan Plesner praised Netanyahu for moving the bill to a committee, and said he hopes the prime minister’s real intention is to kill the “harmful and unnecessary” proposal.“Even though we all want to punish and strike evil terrorists, this is a non-Jewish, ineffective and immoral idea,” he said.Plesner added that there is no proof that the death penalty deters terrorists, so it is doubtful the bill would be effective, but rather would mostly harm Israel’s image.Almagor Terror Victims Association chairman Meir Indor, however, said the government missed a chance to signal that it is hardening its stance toward anyone who takes an Israeli life.“Even if the committee’s conclusions are positive as far as we’re concerned [favoring capital punishment], we are concerned that its fate will be like the Shamgar Committee on the price of freeing captives [in exchange for releasing Palestinian terrorists from prison], which were left in a draw with no discussion of them to this day,” Indor stated.