"We have no better friends than the people, soldiers, and government of the United States," Netanyahu says. 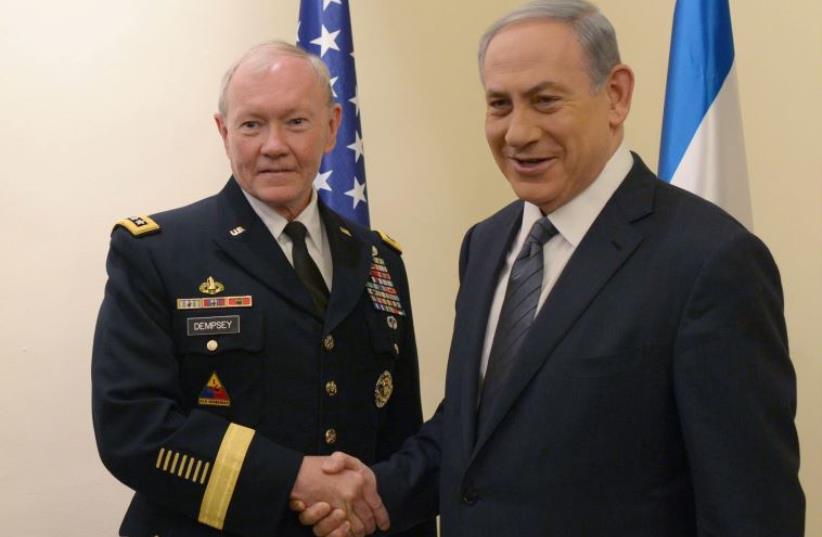 PM Netanyahu and Gen. Dempsey, Chairman of the United States' Joint Chiefs of Staff
(photo credit: AMOS BEN-GERSHOM/GPO)
Advertisement
Israel has no better friend in the world than the American government, the American people, and the American fighting men and women, Prime Minister Benjamin Netanyahu said Thursday at the start of a meeting with visiting US military chief Gen. Martin Dempsey in the capital.“You fight for America, but you also fight for freedom,” the prime minister said, after expressing his “respect and deep admiration” for American fighting men and women.Netanyahu told Dempsey, the chairman of the Joint Chiefs of Staff, that he’s been a “great friend” and was a champion of the US-Israel relationship.
Netanyahu calls Dempsey "great friend," guardian of US-Israel relations
Dempsey presented Netanyahu with a copy of the US Constitution, and said “this is what inspires us, as I know service to your nation inspires you.”After receiving a wrapped gift from Netanyahu, Dempsey said the “greatest gift” has been the friendship forged over the years with the generals of the IDF. “I know you are proud of them, but we are too,” he said.Netanyahu’s meeting with the US general followed Dempsey’s Wednesday meetings with IDF Chief of Staff Lt.-Gen. Gadi Eisenkot and President Reuven Rivlin.Dempsey, who arrived in Israel on Monday on an official visit, is holding a series of meetings with Eisenkot, Defense Minister Moshe Ya’alon and Israeli security chiefs to discuss Iran, bilateral military cooperation, and other security challenges.His visit followed by less than a week a visit by CIA director John Brennan.Jerusalem Post staff contributed to this report.