Netanyahu clarifies remarks on US Embassy in Jerusalem after Trump denial

"The president and the prime minister are not saying anything different." 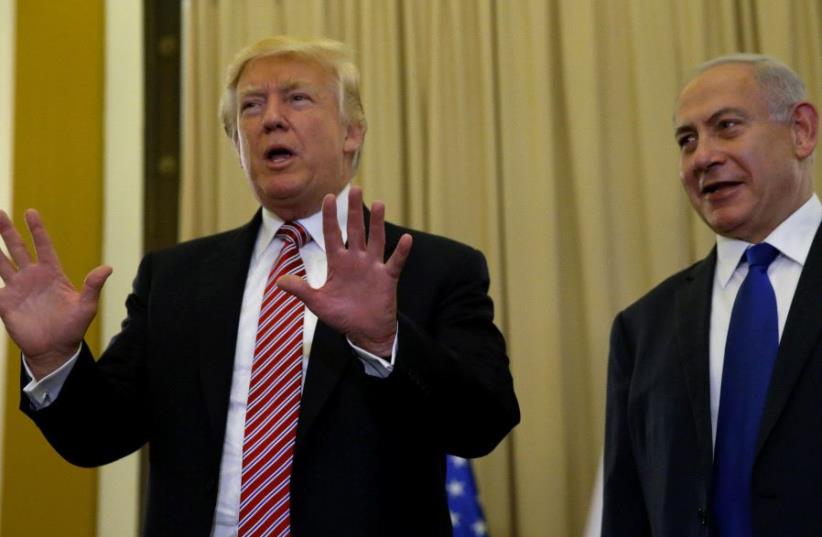 U.S. President Donald Trump (L) and Israel's Prime Minister Benjamin Netanyahu speak to reporters before their meeting at the King David Hotel in Jerusalem May 22, 2017.
(photo credit: JONATHAN ERNST / REUTERS)
Advertisement
JERUSALEM - Israeli Prime Minister Benjamin Netanyahu took a step back on Thursday from comments, challenged by US President Donald Trump, that envisioned a one-year time frame for the planned relocation of the US Embassy in Israel to Jerusalem.An official in Netanyahu's office said the prime minister recognized that construction of a new embassy will take years but believes Washington is considering "interim measures that could result in an embassy opening much faster."The official, who declined to be named, did not define those steps or mention any dates for a Jerusalem embassy to begin operating. In the past, Israeli media have speculated that, before a building is ready, the US ambassador would operate part of the time out of a temporary location in Jerusalem.Reversing decades of US policy, Trump in early December recognized Jerusalem as Israel’s capital and set in motion the process of moving the embassy from Tel Aviv, upsetting the Arab world and Western allies alike.
US President Donald Trump recognizes Jerusalem as Israel"s capital and announces embassy to relocate
Netanyahu, according to Israeli reporters traveling with him on a trip to India, said on Wednesday: "My solid assessment is that it will go much faster than you think - within a year from now."Asked about Netanyahu’s comment, Trump told Reuters in an interview that was not the case. "By the end of the year? We’re talking about different scenarios - I mean obviously that would be on a temporary basis. We’re not really looking at that. That's no."The Israeli official, responding to Trump's remarks, said: "The president and the prime minister are not saying anything different."US Secretary of State Rex Tillerson said last month the embassy move was "probably no earlier than three years out, and that’s pretty ambitious," a time frame that administration officials have attributed to the logistics of finding and securing a site as well as arranging housing for diplomats.