Before boarding a plane to Berlin, the premier said it is "absurd" to ignore the role played by the mufti in encouraging Hitler and his henchmen to murder the Jews. 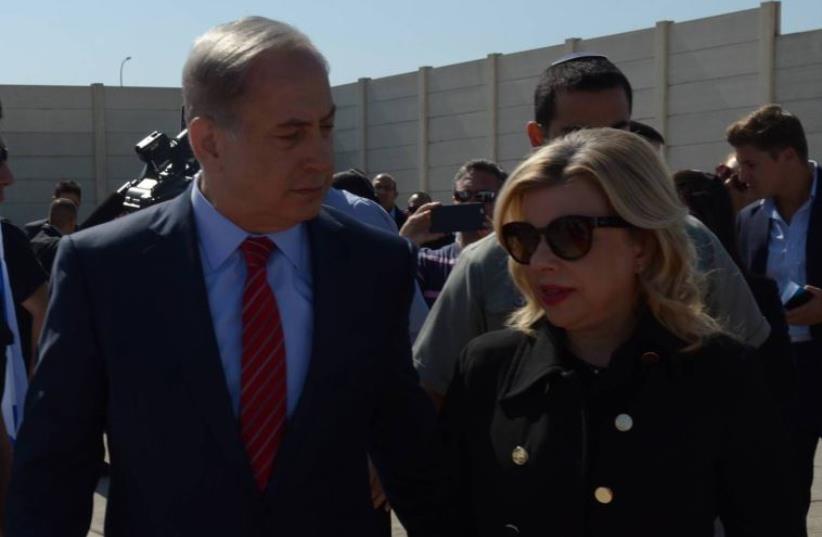 Prime Minister Benjamin Netanyahu and his wife Sara board plane for Berlin
(photo credit: AMOS BEN-GERSHOM/GPO)
Advertisement
Hitler is responsible for killing six million Jews in the Holocaust, and the Palestinian Arab leader at the time, Haj Amin al-Husseini, encouraged him and also wanted to see the Jews dead, Prime Minister Benjamin Netanyahu said as he boarded a plane for Berlin on Wednesday.Netanyahu's clarification came as an uproar ensued as a result of comments he made a day earlier that some interpreted as taking the blame for the Holocaust off of Hitler's shoulders, and placing it on al-Husseini.
Netanyahu: "Palestinian mufti convinced Hitler to massacre Europe"s Jews"
Netanyahu, speaking to the World Zionist Congress on Tuesday, sought to draw a line linking al-Husseini incitement against the Jews in the 1920s for supposedly endangering the Temple Mount, to Palestinian charges today that Israel was threatening the al-Aksa Mosque.“And his attack and other attacks on the Jewish community in 1920, 1921, 1929, were instigated by a call of the Mufti of Jerusalem Haj Amin al-Husseini, who was later sought for war crimes in the Nuremberg trials because he had a central role in fomenting the final solution,” Netanyahu said. “He flew to Berlin. Hitler didn’t want to exterminate the Jews at the time, he wanted to expel the Jews. And Haj Amin al-Husseini went to Hitler and said, ‘If you expel them, they'll all come here.’ ‘So what should I do with them?’ he asked. He said, ‘Burn them’." Following the outcry those comments sparked, Netanyahu said before flying to Berlin for a meeting with German Chancellor Angela Merkel, and on Thursday with US Secretary of State John Kerry, that he had no intention of absolving Hitler of his crimes.Hitler, he said, is responsible for the Final Solution. But by the same token, he said, it is “absurd” to ignore the role played by the mufti in encouraging Hitler and his henchmen to murder the Jews.“There is abundant proof of this,” he said, including testimony by Adolf Eichman's deputy at the Nuremberg trials held after the war.Netanyahu quoted Eichmann’s deputy as saying that the mufti played a role in the decision to destroy European Jewry; thought that this was a “reasonable solution to the Palestine question;” was one of the initiators of the systematic destruction of European Jewry; and was a partner and advisor to Hitler and Eichmann in implementing that plan.Netanyahu said that the reason some researchers and others offer “apologetics” for al-Husseini is clear.“My aim was not to absolve Hitler from the responsibility he bears, but to show that the father of the Palestinian nation at the time, without a state and before the 'occupation,' without the territories and with the settlements, even then aspired with systemic incitement for the destruction of the Jews,” Netanyahu said. Unfortunately, Netanyahu added, the mufti continues to be an admired personality in Palestinian society, and is depicted in textbooks as the father of the Palestinian nation.“And the incitement that began with him, incitement to kill Jews, continues,” the prime minister said. “Not in the same way, but in a different way, and that is the root of the problem. In order to stop the murder, you have to stop the incitement. It is important not to ignore the historical truths, not then, and not today.”Netanyahu added that he will talk about the need to stop the incitement both with Merkel and with Kerry. The prime minister also said that Germany is a “very important partner for Israel's national security.”