The premier called the UK's prime minister to express Israel's solidarity with Manchester in the days after the lethal terror attack that claimed the lives of at least 22 people. 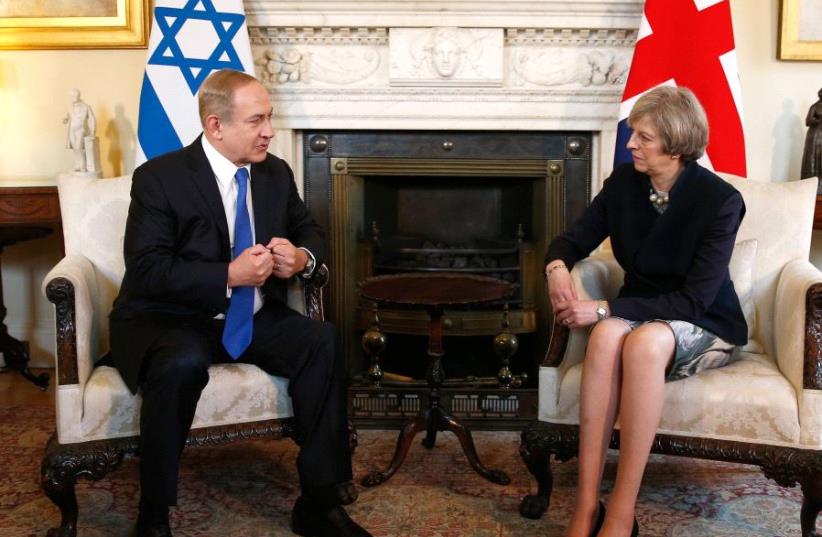 Prime Minister Benjamin Netanyahu meets Britain's Prime Minister Theresa May at 10 Downing Street, in London, February 6, 2017
(photo credit: REUTERS)
Advertisement
JERUSALEM — Prime Minister Benjamin Netanyahu sent condolences on behalf of the Israeli people to British Prime Minister Theresa May for the terror attack at a pop concert in Manchester.Netanyahu, speaking by phone with May on Wednesday evening, said Israel was ready to extend all necessary assistance to their joint war against terrorism, according to a statement from the Prime Minister’s Office.Twenty-two people were killed and dozens wounded, many teens, when a bomb was detonated Monday night at the end of a concert by the American pop star Ariana Grande in the northern England city. The following day, the Islamic State terrorist group claimed responsibility for the bombing.The suspected suicide bomber has been identified as 22-year-old Salman Abedi, the son of refugees from Libya. Five others have been arrested in connection with the attack.The attack was the deadliest in Britain since 2005 bombings in London left 52 people dead.
Manchester: eyewitness video shows chaos after blast (credit: REUTERS/"INSTAGRAM/_KHALD")
On Tuesday, Britain raised its terror alert to the highest level.A general election in Britain is scheduled for June 8. Campaigning was suspended following the attack until Friday.