Netanyahu: I hope Obama won’t forsake us at the UN 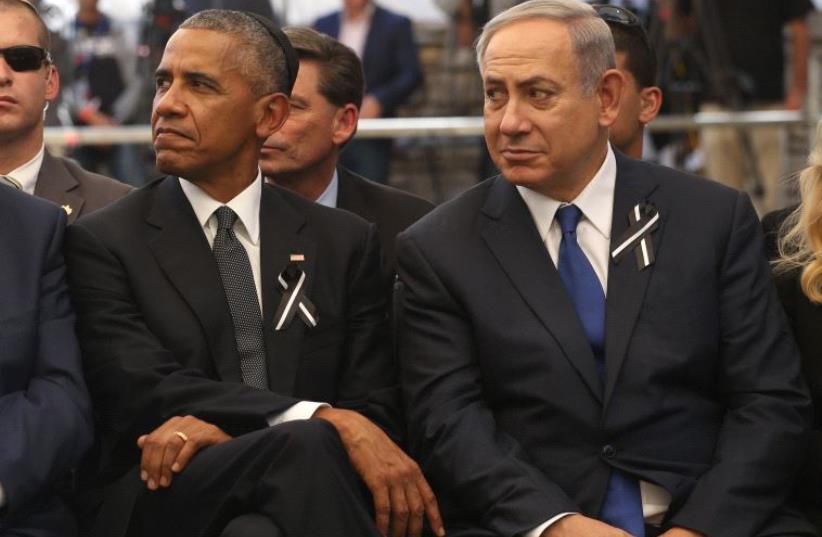 PM Netanyahu and US President Obama
(photo credit: GPO)
Advertisement
Prime Minister Benjamin Netanyahu said Wednesday he hopes US President Barack Obama will not support a Security Council resolution against Israel during his remaining months in office.He issued his statement in response to a Channel 2 story about possible US actions against settlements. Just a few hours earlier, Palestinian Authority UN Ambassador Riyad Mansour urged the UN Security Council to issue a resolution against settlement activity.The council has not issued any resolutions on Israel during Obama’s tenure, but Israel fears he might support or initiate such a resolution before leaving office in January.Netanyahu said, “In the past, there were presidents who at the end of their term in office advanced initiatives that were not in line with Israel’s interests.“I hope this won’t repeat itself,” he said, adding that he expected that Washington wouldn’t change its policy of opposing anti-Israel resolutions at the UNSC.Mansour told the UNSC that along with the Arab Ministerial Committee, the Palestinian mission has launched consultations with all Security Council members, with the aim of “determining a clear course of action” against the settlements as the obstacle to peace.“It is about the law – created by you, the member states – and about respect for the law or, otherwise, its denigration, rendering it meaningless and ineffective,” he said.“This is not a matter of Palestinian opinion, narrative or perspective. It is the law.“There can be no question about the clear legal dimensions of this issue, its standing as a peace and security issue, and the international community’s duty to act, including at the forefront the Security Council, according to its charter mandate,” Mansour added.He slammed the Security Council for believing it has “no duty or role on this issue.” He blamed, in particular, “some permanent members of this council, who are warning [it] not to adopt any resolutions on the matter, in essence demanding [that it] ignore and, worse yet, breach [its] own legal obligations.“Even more appalling is that the Israel that bullies and boasts that peace will not come by resolutions is the very same Israel that was actually created by a UN resolution, a General Assembly resolution to be precise,” he added. “Israel’s constant attempts to diminish and divert the UN’s work in this regard should be denounced and halted, not rewarded.”Last week, during the informal meeting of the council, the Palestinians continued their push to convince the members to hold a formal session on the settlements and issue a resolution against them, as the “Israeli settlement regime,” Mansour explained, is the main focus of the Palestinians.The meeting, which was convened at the request of Angola, Malaysia, Venezuela, Senegal and Egypt, was described by Danon as a Palestinian attempt to “wage diplomatic terror against Israel at the UN.”Mansour said the Security Council has clear responsibilities, and called again for urgent action to address this “ongoing crisis and injustice.”“The council’s paralysis, coupled with the maliciousness of Israeli actions, its contempt for the law and obstruction of any initiative to resolve the conflict are not only regrettable and frustrating, but would test anyone’s resolve and conviction in the rule of law,” he continued.“We remain committed to peace and the achievement of a just solution that will ensure the rights of our people, including to freedom and self-determination in their state of Palestine, with east Jerusalem as its capital, and ensure lasting peace and coexistence between Palestine and Israel and mutual security for our peoples,” Mansour said.France told the UNSC that was still committed to holding an international peace conference by the end of the year, because the conditions were not right for the Israelis and the Palestinians to hold direct negotiations.US Ambassador David Pressman spoke before the UNSC against Palestinian terrorism and Israeli settlement activity, including the retroactive legalization of settler homes.The Quartet report on the Israeli-Palestinian conflict issued in July, he said, called on both Israelis and Palestinians to take steps to preserve the option of a two-state solution, but "frankly we have witnessed the opposite.""We need to start implementing the two state solution on the ground right now," Pressman added.