Earlier this week, the Balad MKs met with the families of 10 terrorists whose bodies have not been released by authorities. 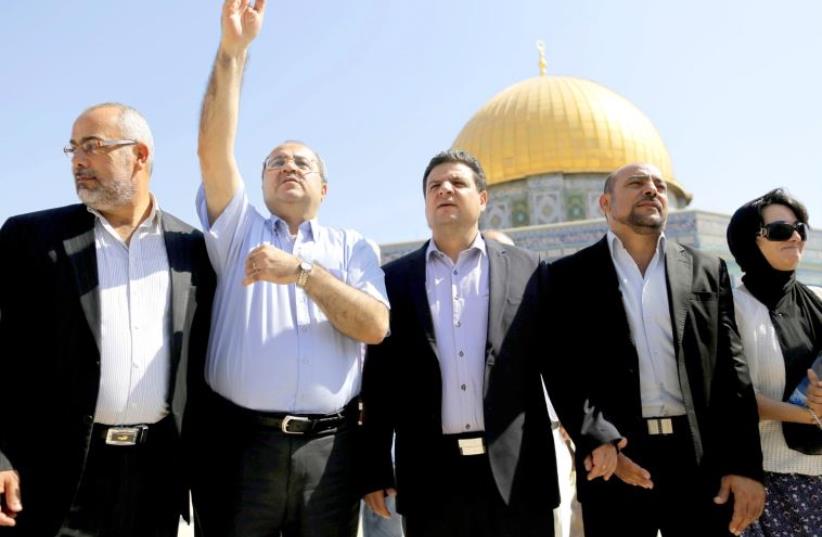 Lawmakers from the Joint Arab List stand in front of the Dome of the Rock during a visit to the compound in Jerusalem's Old City, July 28
(photo credit: REUTERS)
Advertisement
The Joint List called Balad MKs’ visit with terrorists’ families a humanitarian one, saying on Friday that Prime Minister Benjamin Netanyahu was the one at fault for criticizing them. “The meeting of MKs Jamal Zahalka, Haneen Zoabi and Bassel Ghattas,” from Balad, one of the parties making up the Joint List, “with families in eastern Jerusalem who want their sons’ bodies in order to bury them, was meant to promote a humanitarian issue of the first rate.  “The three MKs heard the family and their positions on the conditions the police set and passed the information on to Public Security Minister Gilad Erdan, who said a final decision had not yet been made. It is important to emphasize that burying the dead is a human and religious commandment in the three religions, Islam, Judaism and Christianity; therefore, we call to free the bodies immediately,” the faction’s statement reads.Earlier this week, the Balad MKs met with the families of 10 terrorists whose bodies have not been released by authorities, including the father of Baha Alian, who, together with an accomplice, killed three people by shooting and stabbing passengers on a bus in Jerusalem’s Armon Hanatziv neighborhood on October 13, 2015. Police shot and killed Alian at the site of the attack. The Balad Facebook page, brought to light by Palestinian Media Watch, called the terrorists shaheeds (martyrs) and featured a video of Alian’s father calling the meeting “warm and productive.” Ma’an, a Palestinian news agency, said the MKs took part in a moment of silence for the terrorists. Jewish Israeli politicians from Bayit Yehudi to Meretz denounced Balad for taking part in the meeting. Netanyahu said “MKs who go to comfort families of terrorists who murder Israelis do not deserve to be members of the Israeli Knesset.” The prime minister and Knesset Speaker Yuli Edelstein submitted complaints to the Knesset Ethics Committee, and Netanyahu sought Attorney-General Avihai Mandelblit’s opinion on steps that can be taken against the lawmakers. On Friday, the Joint List said it “rejects and condemns the incitement led by Prime Minister Benjamin Netanyahu against [the Balad MKs] about their actions to return the bodies, which is totally legitimate without any connection to the circumstances of the death.  “Stop the incitement,” the faction’s statement said. “The issue has been discussed by political and security officials…therefore it is unclear why there has been such a fuss about the actions to return the bodies that have not yet been buried. The prime minister and some ministers and MKs took advantage of the issue to incite and called for punishment, even though no laws or ethics rules were broken.” Meanwhile, Edelstein spoke to Michah Laken, the son of Richard Laken, who was murdered by Alian, who called in the press for the Knesset Speaker to remove the Balad MKs’ immunity. Edelstein explained that he does not have the authority to do so, but suggested that Laken submit a complaint to the Ethics Committee and called on any other disturbed citizens to do so. Instructions on petitioning the committee can be found on the Knesset website. “The Knesset is the people’s House. It listens to and works for the people, and therefore, it is the right of anyone who was hurt to ask it to conduct an inquiry,” Edelstein said. Edelstein does not have the authority to punish the Balad MKs, but if the Ethics Committee determines the visit was a violation, it can sanction them with suspensions of up to six months from all Knesset activity but voting – a punishment Zoabi received in the past for comments sympathizing with Hamas during Operation Protective Edge - or a new punishment that has yet to be used, docking their salaries. In addition, if the attorney-general finds their actions to be criminal, he may ask the Knesset House Committee to vote to remove their immunity, so they can be put on trial. The Supreme Court has overturned all past Central Election Committee decisions to ban Balad or individual members of the party from running for seats in the Knesset.