PM sets off for first ever visit by a sitting Israeli premier to the two countries. 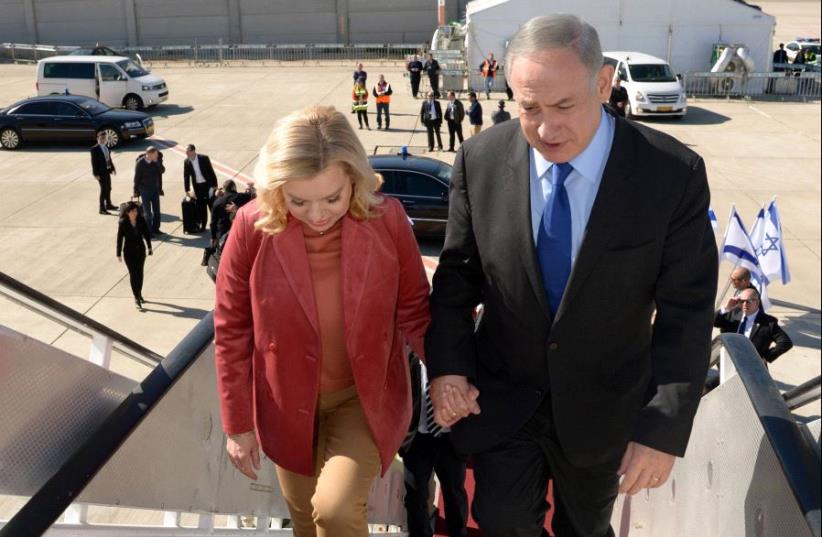 Prime Minister Benjamin Netanyahu and his wife Sara on their way to Singapore
(photo credit: CHAIM ZACH / GPO)
Advertisement
Prime Minister Benjamin Netanyahu boarded a plane again Sunday, traveling abroad for a third week in a row, this time to Singapore and Australia to strengthen ties with the two East Asian countries.The visits will be the first by a sitting Israeli prime minister to either country.“What we are doing is to strengthen Israel’s standing in the world, and this was apparent during my visit in Washington, as it was during my previous visits to the Islamic world and now to Australia and other major powers in Asia,” Netanyahu said at the weekly cabinet meeting before departing. “And it is clear that there is also an economic aspect here – to open new markets. This is one of the things that contribute to strengthening Israel’s economy.”He credited Israel’s improved standing in the international arena with the country’s 4% economic growth in 2016.The prime minister is scheduled to land in Singapore on Monday morning and go directly to the presidential palace for a meeting with President Tony Tan Keng Yam. That will be followed by a meeting with Prime Minister Lee Hsien Loong, with whom Netanyahu met last April during the first visit by a Singaporean prime minister to Israel.At a speech at the Hebrew University of Jerusalem during that visit, Lee noted that when Singapore became independent in 1965, the IDF “helped us to develop the Singapore Armed Forces.”Over the years, he continued, “Our relations have expanded much further beyond defense and security, though, of course, defense and security ties remain.”Netanyahu will also meet with Deputy Prime Minister and National Security Minister Teo Chee Hean.He will then go to the Magen Avot Synagogue, which dates back to 1878, to meet representatives of Singapore’s 2,500-member Jewish community.On Tuesday afternoon he will fly to Sydney, landing the next morning for a full day of meetings with Australian officials, including Governor-General Peter Cosgrove and Prime Minister Malcolm Turnbull.Netanyahu and Turnbull are scheduled to hold a joint press conference.Turnbull will join Netanyahu at an event for the Jewish community at Sydney’s Great Synagogue and also accompany him on Thursday to visit Moriah College’s Jewish day school.On Friday, Netanyahu is scheduled to meet Australian opposition leader Bill Shorten.Netanyahu had been scheduled to visit Australia in 2014 but canceled due to Hamas’s kidnapping of three Israeli yeshiva students Eyal Yifrah, Gil-Ad Shaer and Naftali Fraenkel, who were subsequently murdered.President Reuven Rivlin was scheduled to visit in March of last year, but canceled in February and, instead, traveled to Russia to meet with President Vladimir Putin.The Australians were far from pleased, and Rivlin subsequently apologized personally to Foreign Minister Julie Bishop when she was in Israel last September.Despite bipartisan support for Israel in parliament, Netanyahu will discover that he’s not exactly a welcome guest.Australian and British media reports indicate that protest demonstrations against Netanyahu’s visit have been planned for Sydney, Melbourne and Canberra. In addition, 60 prominent Australian business and religious leaders, jurists, academics, entertainers and former politicians issued a statement opposing the visit on the grounds that Netanyahu’s policies “provoke, intimidate and oppress” the Palestinian people and are distancing the Middle East from peace to an even greater extent. Among the signatories to the statement are former federal court judge Murray Wilcox, former solicitor-general Gavan Griffiths and several queen’s counsels.The statement, which calls for Turnbull to rethink his support for Israel, emphasizes that Netanyahu’s policies “are inconsistent with Australian values and beliefs and we should not welcome him here.”Meanwhile, Melbourne, which has the strongest and most ardently Zionist Jewish community in Australia, is peeved because Netanyahu reportedly canceled the Melbourne visit, claiming his trip to the US last week to meet with President Donald Trump took up the time he had intended to give to Melbourne.The Australian Jewish News, under the headline “Melbourne: Bibi not coming,” reported that Sharene Hambur, the president of Zionism Victoria, called the cancellation disappointing but understandable, given limitations of the reduced time in Australia.Some Melbourne Jews who divide their time between Australia and Israel flew home in time to greet Netanyahu before it was known that he would not be going to Melbourne after all.Some of them will likely fly to Sydney to listen to his address there, but many who generously support various Israeli causes regard Netanyahu’s bypassing of their city – located in a state with a Jewish Governor – as a slap in the face.Netanyahu is being accompanied on the trip by his wife, Sara.Tovah Lazaroff contributed to this report.