Netanyahu: Majority of Americans see eye to eye with Israel on Iranian threat

Netanyahu made the remarks in a Rosh Hashana toast with Foreign Ministry employees Thursday. 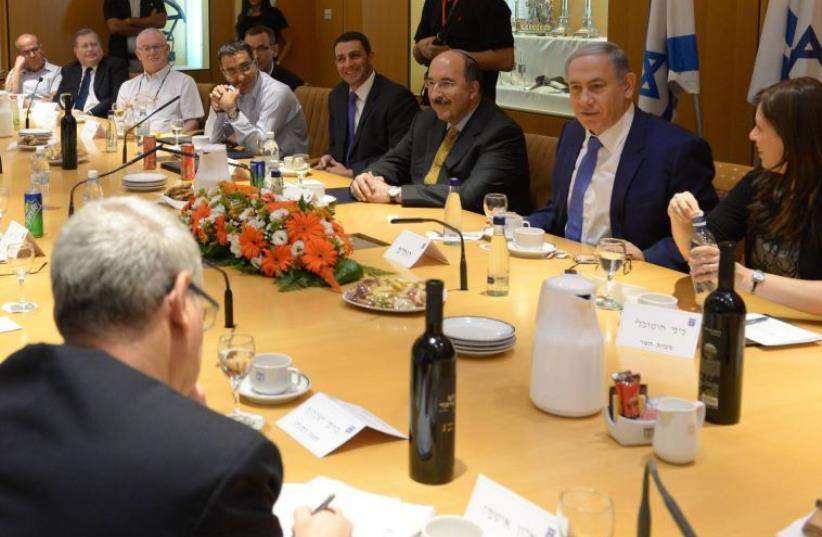 Netanyahu speaks at Foreign Ministry Rosh Hashana toast
(photo credit: COURTESY FOREIGN MINISTRY)
Advertisement
In a Rosh Hashana toast with Foreign Ministry employees Thursday, Prime Minister Benjamin Netanyahu said that the majority of Americans see Iran as a threat, and despite disagreements,the United States remains Israel's closest friend and ally."Even in the face of disputes, Israel must be mindful of its traditional allies, chiefly the United States," Netanyahu said. "And although the majority of Americans see eye to eye with us in terms of the threat Iran poses, its important that the American public understand the fact that Iran is an enemy of the United States and openly declares it.""Israel and the United States are allies and this understanding has important implications for our continued security cooperation," Netanyahu added.  The remarks come a day after the Obama administration secured the support of 34 senators for its landmark nuclear agreement with Iran, ensuring its safe passage through a vote scheduled in Congress this month.Senator Barbara Mikulski, Democrat from Maryland, announced her support for the deal on Wednesday morning. She followed announcements from two Democratic colleagues, senators Chris Coons of Delaware and Bob Casey, Jr. from Pennsylvania, the previous day.US President Barack Obama only needs one third of one house of Congress to ensure passage of the accord, because that number is the minimum necessary to uphold a presidential veto. Congress may still vote and pass a resolution disapproving of the deal when it reconvenes next week.That will be the fight ahead: Over whether a vote of disapproval will take place at all. For such a vote to occur, 60 members of the Senate will have to agree to proceed with debate and break filibuster. Currently, opponents are four votes short of that threshold, with 56 publicly against.Michael Wilner contributed to this report.