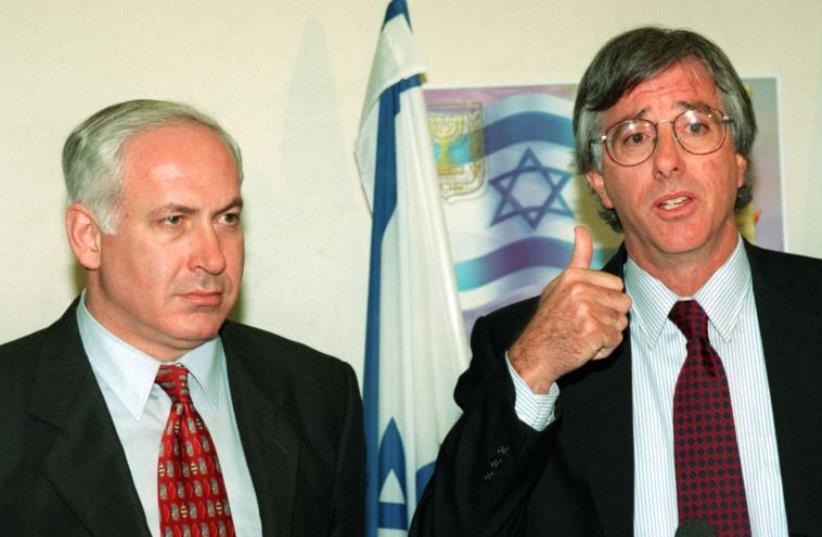 United States special envoy Dennis Ross (R) and Prime Minister Benjamin Netanyahu meet in Jerusalem in this 1998 file photo
(photo credit: REUTERS)
Advertisement
Prime Minister Benjamin Netanyahu told the United States five years ago that Israel could withdraw from most of the West Bank if his country's security needs were met, former US Middle East peace negotiator Dennis Ross recounts in a book to be published next week.Prodded by US Secretary of State Hillary Clinton in 2010 to say what he could do to advance peace talks and citing Israeli security needs, "he said that Israel could withdraw from most of the territory," Ross writes in Doomed to Succeed: the US-Israel Relationship from Truman to Obama."He did not want to give percentages, but he understood what the Palestinians wanted, and if the Israeli security needs were accepted by us and met, he could be generally responsive," Ross writes.Ross has advised Republican and Democratic presidents, including Democratic President Barack Obama.Interviewed by Reuters on Friday, Ross said he believed Netanyahu was deliberately vague at the time about land Israel would give up in a peace deal and this was consistent with past Israeli leaders who were reluctant to state their bottom lines out of concern that no matter how much they offered, it would never be enough.However willing Netanyahu might have been in 2010, he has since said in the face of post-Arab Spring regional instability that any Israeli withdrawals from occupied territory would embolden hardline Islamist guerrillas arrayed on its borders.Obama and Netanyahu, when they meet at the White House early next month, have an interest in repairing relations that in March reached their lowest point since 1982 over the Iran nuclear deal and remarks Netanyahu made against Arabs in his successful re-election bid, Ross said.While seeing little hope of an Israeli-Palestinian peace deal in the 15 months left of Obama's term, Ross said it would be good if the US president worked with both to reduce violence and improve lives, and quietly probed Arab states about the prospects for fostering a better atmosphere."I think you have to lower your sights. I don't believe that Abu Mazen is capable of negotiating an agreement now," Ross said, using Palestinian President Mahmoud Abbas's familiar name, when asked about the prospects for a deal during Obama's tenure.Ross said Obama could reassure Netanyahu by offering to set up a consultative committee to address Israeli concerns about Iran and to weigh options together to counter Iran's support for Hezbollah, a Lebanese militia opposed to Israel.For Netanyahu, who spoke against the nuclear deal in March at the invitation of Republicans in the US House of Representatives, Ross said, "I don't think there's anything more important than that Israel has to be an American issue, not a Republican or Democratic issue.""Within the White House there's clearly a sense that they see him as playing a partisan game, and I think it would be important for him to make it very clear in words and deeds that that's the last thing on his mind right now," Ross said."The reality is we've seen these periods before and afterwards we've also seen efforts to mend the fences," he said, citing previous Israeli tensions with the administrations of presidents Jimmy Carter, Ronald Reagan and George H.W. Bush.Ross said Netanyahu would help matters if he took three steps: working with Israel's allies Britain, France and Germany to help them better understand his country's concerns, opening his coalition to more moderate political parties, and proving his interest in a two-state solution by saying no to building further Jewish settlements on land he envisions as part of a future Palestinian state.