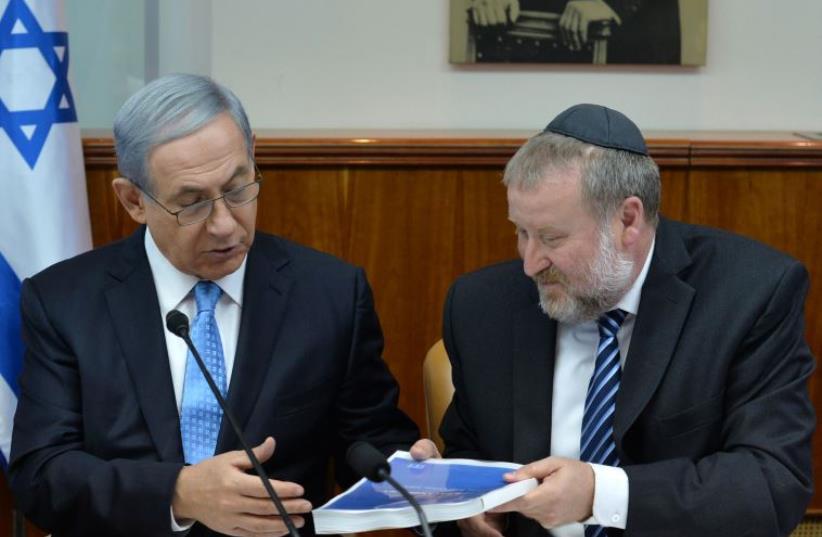 Prime Minister Benjamin Netanyahu receives report with findings on Operation Protective Edge.‏
(photo credit: KOBI GIDEON/GPO)
Advertisement
Israel will work in all ways possible to fight against anti-Israel lies, Prime Minister Benjamin Netanyahu said at Sunday’s cabinet meeting upon receiving an inter-ministerial report of last summer's Operation Protective Edge in Gaza.
The Foreign Ministry made public the report, which has been in the works for months, in the afternoon. The timing of the release is to preempt the UN Human right's Council commission report on the Gaza operation that is expected to be released this week.Speaking of the Israeli report, Netanyahu said “this presents the true fact that the actions carried out by the IDF were done in accordance to international law.”Netanyahu said the operation was carried out to defend Israeli citizens from a terrorist organization that was carrying out a dual war crime: firing indiscriminately on Israeli citizens while hiding behind their own citizens.“Israel and the IDF are committed to the rules of international law even when fighting terrorist organizations that intentionally violated those rules,” he said. He said that this commitment does not flow from one report or another, but rather from the fact that “Israel is a democratic, moral state that acts in accordance to international law.”The government has been working on the report, and debating the timing of its release, for weeks. It was originally scheduled to be released in March, when the UNHRC report was set to be released, but was postponed after the UN report was postponed since the commission's head, William Schabas, was forced to step down after it was revealed that he had worked briefly as a paid consultant for the PLO in 2012.The UNHRC report is expected to be the basis of any Palestinian war crimes case against Israel before the International Criminal Court. Israel refused to cooperate with the UNHRC probe from the outset, charging that the commission is tantamount to a kangaroo court, whose conclusions were determined before the investigation even began.Over the weekend a blue-ribbon panel of former diplomats and military experts who, unlike the UN Commission, did have access to Israeli political and military leaders issued a report that will be presented to the UNHRC saying that the IDF did act within the boundaries of international law.
Advertisement
Subscribe for our daily newsletter