In an interview with "CNN's Fareed Zakaria GPS," Netanyahu did not join the United States and other NATO nations in criticizing Russia's taking military action in Syria. 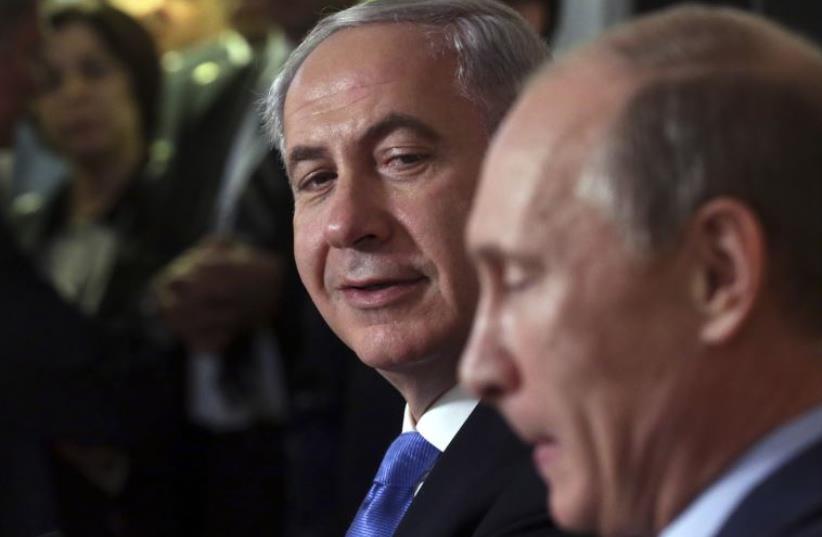 Russian President Vladimir Putin (R) and Prime Minister Benjamin Netanyahu attend a news conference in Sochi
(photo credit: REUTERS)
Advertisement
Prime Minister Benjamin Netanyahu said Israel wants to avoid an adversarial relationship with Moscow and is unsure how Russia's recent military intervention in Syria will affect the situation there.Netanyahu, in an interview recorded for broadcast on Sunday on "CNN's Fareed Zakaria GPS," did not join the United States and other NATO nations in criticizing Russia's taking military action in Syria.Russia has said it is only targeting Islamic State militants, but other countries including Britain have said the focus of its attacks has been other rebel groups fighting to oust President Bashar Assad, Moscow's ally."We don't want to go back to the days when, you know, Russia and Israel were in an adversarial position," said Netanyahu, who met with Russian President Vladimir Putin in Moscow late last month. "I think we've changed the relationship. And it's, on the whole, good."Assad also is backed by Iran, Israel's ardent foe and supporter of Hezbollah, and Israel is concerned that Russian weapons being deployed in Syria could end up with the militant group."I went to Moscow to make it clear that we should avoid a clash between Russian forces and Israeli forces," Netanyahu said."In Syria, I've defined my goals. They're to protect the security of my people and my country. Russia has different goals. But they shouldn't clash."He said Israel and Russia would talk soon about the situation.Asked if Russia's entry in the Syrian conflict would be destabilizing, Netanyahu said: "I don't know. I think time will tell."Netanyahu signaled that Russian deployment would not deter Israel from continuing to take occasional military action in Syria."If anybody wants to use Syrian territory to transfer nuclear weapons to Hezbollah, we'll take action," he said. "And we continue to do that."In an address at the UN General Assembly last week, Netanyahu had continued his harsh criticism of the deal reached by world powers to curb Iran's nuclear program but looked ahead in the CNN interview."I'm not going to rehash the deal," he said. "... Let's look forward. Let's keep Iran's feet to the fire. Let's make sure that they keep all their obligations under the nuclear deal."