Netanyahu: 'Significant progress' in talks with US on settlement construction

It’s presumed that Netanyahu seeks permission to build in the settlement blocs in exchange for freezing isolated Jewish communities in Judea and Samaria. 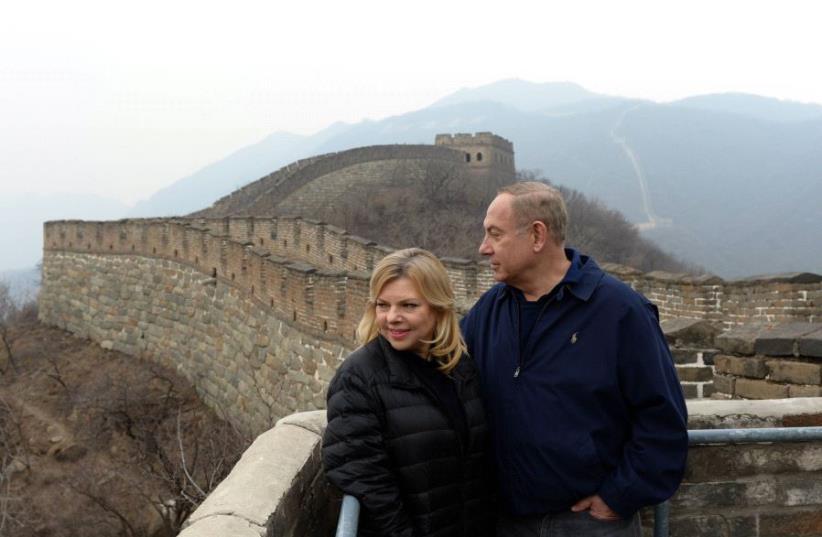 Prime Minister Benjamin Netanyahu and his wife Sara visit the Great Wall during state visit to China, March 22, 2017
(photo credit: HAIM ZACH/GPO)
Advertisement
“Significant progress” has been made in talks with the Trump Administration regarding guidelines for future construction in West Bank settlements, Prime Minister Benjamin Netanyahu said on Wednesday.Netanyahu made his comments to reporters on his plane just before flying to Tel Aviv from Beijing.“The talks have not yet concluded, but there is progress which I will hear from my emissaries when I return to Israel,” he said.
Trump"s envoy Jason Greenblatt meets Netanyahu (credit: REUTERS)
Talks on the matter began last week when Trump's envoy Jason Greenblatt came to the region. They continued in Washington this week between Trump's team and an Israeli delectation made up of Netanyahu's chief-of-staff Yoav Horowitz and the prime minister's foreign policy adviser Jonathan Schechter.Data released Wednesday from the Central Bureau of Statistics showed that in 2016 settler housing starts had increased by 40% while  the number of completed homes in West Bank settlements dropped by 14%.It’s presumed that Netanyahu seeks permission to build in the settlement blocs in exchange for freezing isolated Jewish communities in Judea and Samaria. Another plan that has been talked about is limiting construction in the settlements to the built up areas.Speaking at the Meir Dagan Conference in Netanya on Tuesday night, Defense Minister AvigdorLiberman said of the talks, “It’s important to find a text that will satisfy both sides. If someone thinks we can do what we want here [with regard to settlement activity], they are mistaken.”Liberman himself lives in the West Bank settlement of Nokdim and supports settlement activity, but has urged constraint until Israel and the US come to an agreement on the issue.“We had eight-difficult years with the Obama Administration. Now we have a pure Republican government, with a majority in the House and the Senate, and of course a friendly Republican president in the White House,” Liberman said.He cautioned Israeli politicians to be careful about their statements in support of unilateral actions in Judea and Samaria, such as annexation, because their words were heard as far away as the White House.“There are things we can do and things we cannot do unilaterally,” he said.