Netanyahu: Ban's criticism of IDF actions in Gaza is a black day for the UN

Earlier in the evening, Ban called on Israel to halt its violence against children in Gaza as he addressed the UN Security Council. 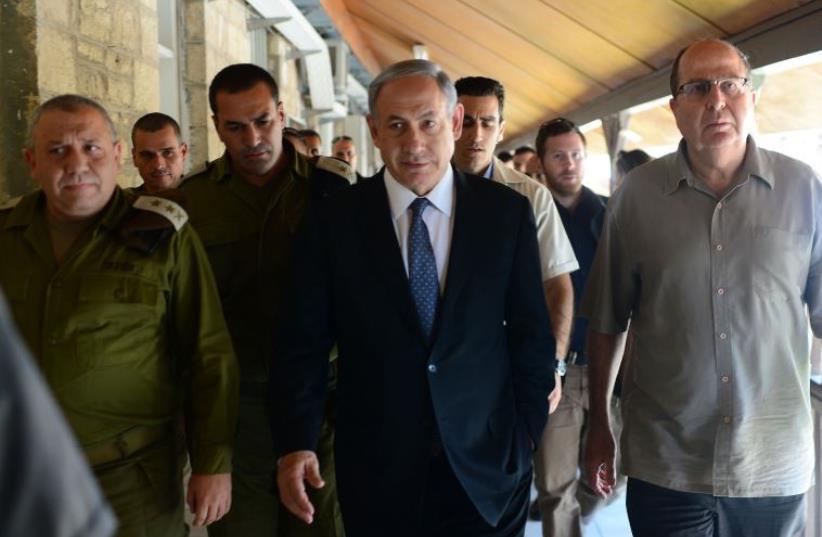 From left: IDF chief of staff Gadi Eisenkot, Prime Minister Benjamin Netanyahu, and Defense Minister Moshe Ya'alon pay a visit to the IDF's Home Front Command
(photo credit: KOBI GIDEON/GPO)
Advertisement
Prime Minister Benjamin Netanyahu accused UN Secretary- General Ban Ki-moon of “hypocrisy” for comparing Gaza with Syria and calling solely on Israel not to harm children in conflict zones.“This is a black day for the United Nations,” Netanyahu said in a sharply worded statement he issued late Thursday night in response to a speech Ban delivered earlier that day to the Security Council. “It turns out, there is no limit to the United Nations’s hypocrisy.”Ban had spoken at an open UNSC meeting to debate the report on the dangers that children in war zones face, which was submitted by UN Special Representative of the Secretary- General for Children and Armed Conflict Leila Zerrougui of Algeria.“I urge Israel to take concrete and immediate steps, including by reviewing existing policies and practices, to protect and prevent the killing and maiming of children and to respect the special protections afforded to schools and hospitals,” Ban said.“Last year was one of the worst in recent memory for children in countries affected by conflict,” Ban told the UNSC.Ban spoke against the grave violations against children in the Central African Republic, Iraq, Nigeria, South Sudan and Syria, as well as the suffering of those in Gaza as a result of Operation Protective Edge.Earlier this month, Ban had ceded to a request from Netanyahu to remove Israel from a list Zerrougui had compiled for an addendum to the report, which placed the IDF on a list of the worst violators of human rights, which included Islamic State and Boko Haram.But when it came his public speech to the Security Council, Israel was the only country Ban singled out for additional criticism and he made no mention of Hamas.Ban didn’t mention the facts, Netanyahu said, such as Hamas turning Gaza children into hostages by firing rockets at Israel.“It dug terrorist tunnels in the direction of kindergartens.[But] the UN has chosen to preach to Israel, which has chosen to abide by international standards,” the prime minister said.Earlier this week former generals from the US and Europe declared that Israel had abided by international law during the war, Netanyahu said.Far from adopting this view, the “UN has granted Hamas immunity even though there is incontestable proof that Hamas committed war crimes when it launched rockets from hospitals, mosques and UN facilities,” he said.An Israeli official spoke with The Jerusalem Post about the discontent with Ban’s words.“We work closely with the secretary-general so there was a genuine disappointment in Israel with regard to his speech,” the official said.Deputy Foreign Minister Tzipi Hotovely (Likud) said such a one-sided approach was “very disturbing.”Hotovely, along with center and Left politicians, including Meretz, immediately took exception to Ban’s listing of Israel with the worst conflict zones.“At a time when ongoing hostilities are raging throughout the Middle East at an enormous cost in terms of the lives of children and other civilians, this statement drew a comparison between Israel and states that are among the worst systematic violators of human rights,” Hotovely said.Yesh Atid Party head MK Yair Lapid said “the words of the UN secretary-general are disconnected from reality.”Ban didn’t mention, not even once, that Hamas used Palestinian children as human shields so that it could launch rockets against Israeli children, Lapid said.Even Meretz MK Ilan Gilon spoke out against Ban and charged that he had “lowered the moral foundation of any criticism the UN and its organization would level against Israel.”“What Israel has forgotten about human rights, other countries under scrutiny have yet to learn,” he said.