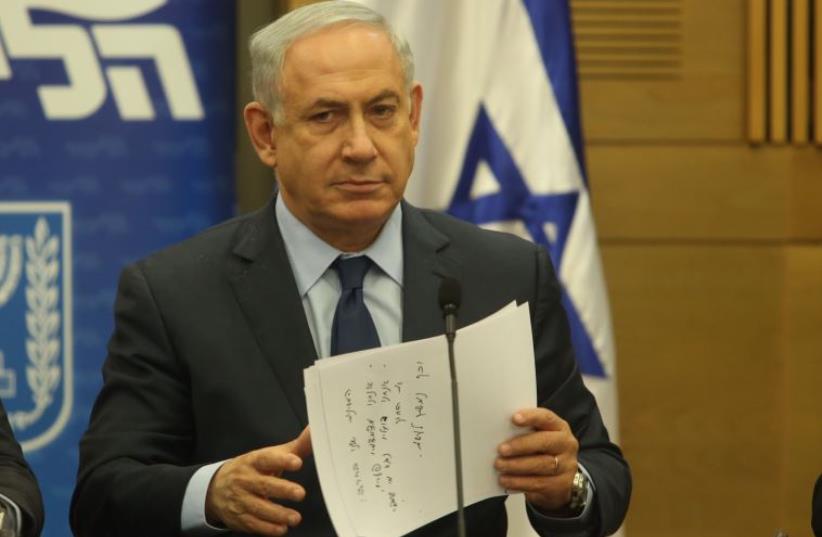 Benjamin Netanyahu
(photo credit: MARC ISRAEL SELLEM/THE JERUSALEM POST)
Advertisement
Terrorism is terrorism, whether it happens in Tel Aviv, Jerusalem or Duma, Prime Minister Benjamin Netanyahu said in the Knesset Monday.His comments came hours after MK Osama Sa’adi (Joint List) differentiated between Friday’s shooting in Tel Aviv and the terrorist attack that killed Eitam and Na’ama Henkin in front of their four children near Eilon Moreh in the West Bank.When asked if the attack in Tel Aviv was terrorism, Sa’adi said: “Clearly, and I condemn it.”However, he would not give a yes or no answer to the same question about the Henkin’s murder.“Settlers are occupiers that steal the land of the Palestinian nation. We are against harming innocent civilians, but there is a difference between settlers, who are occupiers, and Tel Aviv,” Sa’adi said.Netanyahu referred specifically to Sa’adi’s comments during his response to a no-confidence motion on Monday.“We are in a wave of terrorist and murderous acts and I expect all members of this house to condemn these criminal acts,” he said. “Just two hours ago, Osama Sa’adi was interviewed and refused to condemn the murder of the Henkins and said he differentiates between the murder of Jews in Tel Aviv and in Judea and Samaria.“Terrorism is terrorism and it does not matter if it happened in Jerusalem, Ra’anana, Hebron, Tel Aviv or Duma,” he stated.When MK Ahmed Tibi (Joint List) interjected to tell Netanyahu that MK Bezalel Smotrich (Bayit Yehudi) refused to call the Duma firebombing terrorism, the prime minister added: “Terrorism is not determined by the identity of its perpetrators or its goals. It is unacceptable in its essence.”Netanyahu repeated: “I expect all MKs, from MK Sa’adi to MK Smotrich, to condemn all terrorism without using euphemisms or stuttering. Terrorism is terrorism is terrorism.”Soon after, Smotrich wrote on Twitter: “As someone who lost his best friends in terrorist attacks, the comparison between me and MK Sa’adi is bizarre. He supports terrorism; I condemn it. The prime minister knows that.”Smotrich wrote an op-ed last month explaining why he thinks the Duma attack is not terrorism, which his party leader, Education Minister Naftali Bennett, denounced.Opposition leader Isaac Herzog (Zionist Union) addressed the Knesset after Netanyahu, saying he “completely identifies with the fact that terrorism must be fought uncompromisingly and uprooted, and there is no doubt we are all united in condemning it.“The question is how your government deals with the terror. Unfortunately, it is being weak and failing to deal with it,” he said.