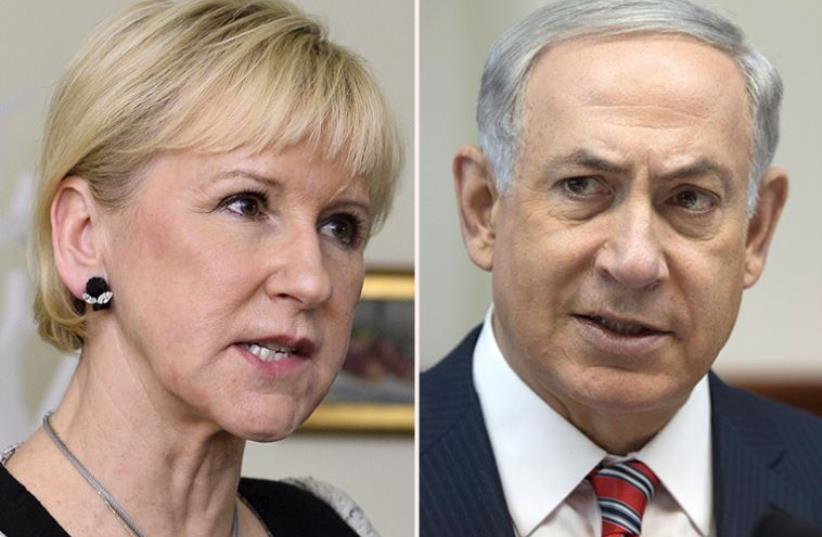 Wallstrom and Netanyahu
(photo credit: REUTERS,ABIR SULTAN / POOL / AFP)
Advertisement
Prime Minister Benjamin Netanyahu came out against the double standards held by critics of Israel, in his remarks at a Likud faction meeting Monday.Netanyahu highlighted remarks by Swedish Foreign Minister Margot Wallström in parliament last week, accusing Israel of "extrajudicial executions" and "disproportionate" force in response to the current wave of Palestinian terrorism, according to Swedish newspaper Expressen.Israel gives full support to security forces and civilians, "who have the right to defend themselves," the prime minister stated.Netanyahu recounted that he called Swedish Prime Minister Stefan Lofven on Sunday to "strongly protest [Wallström's] hypocrisy."The prime minister said he did not hear Wallström call the killing of the terrorists who recently attacked San Bernardino, California or Paris extrajudicial executions.Pointing out that Wallström said in an interview that she had been misunderstood, Netanyahu said he was happy to hear it, and that she told an interviewer she had no proof of her original claim."There aren't two sets of morals, one for Israel and one for the rest of the world," Netanyahu stated. "We will continue fighting terrorism and hypocrisy."According to Expressen, Wallström’s press secretary, Eric Wirkensjö, issued a statement later saying that the foreign minister did not say that Israel carried out “extrajudicial executions,” but rather was speaking in general about the importance of proportionality and the “principle of distinction” in international law, and that what she stated applies to all parties.This is the third time that the Swedish diplomat has angered Israel with comments about the current wave of terrorism.Following the Paris attacks in November, she made comments to Swedish television that the Foreign Ministry took as linking those attacks to Israel’s conflict with the Palestinians.And in October she posted a tweet that left diplomatic officials scratching their heads.“Escalating violence in Jerusalem. Attacks against civilians unacceptable. Bring perpetrators to justice. Leaders must act responsibly,” wrote Wallstrom.An Israeli diplomatic source blasted her for that tweet, saying it was “most regrettable” she was “unwilling to state in a clear and unequivocal way that the terrorists are Palestinian, and the victims are Israeli.”In January she said that Israel “has irritated not only us, but the Americans and everyone who has anything to do with them right now” for its anger over Stockholm’s decision in 2014 to recognize a Palestinian state. Sweden’s decision, fulfilling a campaign pledge at the time, triggered a rash of moves in European parliaments to recognize a Palestinian state.Sweden is currently competing against Italy and the Netherlands for the two 2017- 2018 spots on the UN Security Council reserved for the Western Europe and Others Group of countries.
Herb Keinon contributed to this report.