Among the countries that Netanyahu plans to visit in Africa are Kenya and Uganda. 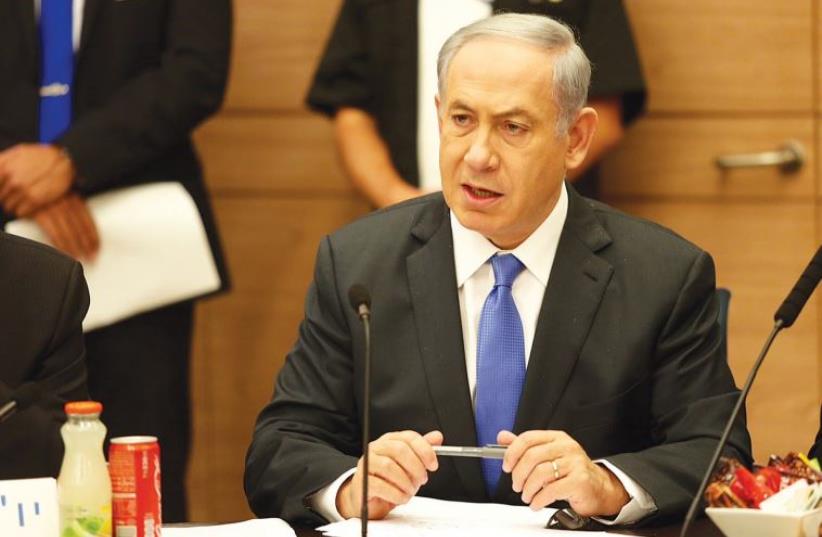 Prime Minister Benjamin Netanyahu speaks at a Likud faction meeting
(photo credit: MARC ISRAEL SELLEM/THE JERUSALEM POST)
Advertisement
A prime ministerial trip to Africa will illustrate clearly Israel’s coming back to Africa, and Africa’s return to Israel, Prime Minister Benjamin Netanyahu said Monday.Netanyahu, speaking in the Knesset at the launch of the new Knesset Caucus for Israel-Africa relations, confirmed what was first reported in The Jerusalem Post last month, that he intends to visit around the 40th anniversary of the Entebbe raid that took place on July 4, 1976.Among the countries that Netanyahu plans to visit are Kenya and Uganda.The last sitting Israeli prime minister to visit the neighboring continent was Yitzhak Shamir in 1987.“For too long you have come here and we have not come there, and we are going to change that,” he said in English at the meeting, which included 13 African ambassadors, five honorary consuls and a smattering of MKs, mostly from the Likud.Over the last two months Netanyahu has met in Jerusalem with the president of Kenya, who was here last week and extended an invitation to visit, and the foreign minister of Rwanda. Ghana’s foreign minister is scheduled to arrive later this month, as is Ethiopia’s deputy prime minister.Netanyahu said that Israel was formulating an “Africa strategy,” and that Israel and Africa’s rediscovery “should have happened a long time ago. It’s happening now because it’s so clear that this is good for Africa and it’s good for Israel. We face a multitude of challenges and opportunities.”The prime minister said that he would like to see “the closeness of our relationships reflected also in the voting pattern of the African Union.“I would like to eventually get to that point with the African Union, because you should vote for the interests of your own countries and you should vote for the interests of Africa,” he said. “And I have no doubt whatsoever that today the interests of Africa and the interests of Israel cohere.They’re almost identical, and in some respects... and in many respects they are identical. So, I want to see that reflected in our bilateral relationship and also in our multilateral relationship.”The strongest common interest, he said, was to defeat Islamist extremism.“It threatens every land in Africa,” he said. “Its nexus is in the Middle East, but it is rapidly spreading. It can be defeated. It can only be defeated if the nations that are attacked by it, make a common cause. We understand the dangers of al-Shabaab. We understand the dangers of the other militants that threaten your countries in Africa, and we are prepared to work with you to defeat them. And it is possible to do so.”Likewise, Netanyahu said, Israel is prepared to help Africa in other spheres as well: agriculture, healthcare, water, irrigation, science, technology, investment, tourism and cyber.Knesset Speaker Yuli Edelstein addressed the group, pointing out that relations with African countries was a priority for Israel as early as the 1960s.“I believe that if we want to base relations between our countries on a solid platform, it is important to strengthen it on the level of parliaments,” he said.Caucus chairman MK Avraham Neguise (Likud) said, “The Jewish people and the people of Africa have a sense of sharing a common destiny, because both have suffered from discrimination and foreign rule.... This struggle can bring us together.”Neguise said ties between Israel and African states have improved in recent years, and that Israeli agricultural technologies combined with fertile soil in Africa can help alleviate hunger.“Israeli technologies have raised the quality of life and saved countless lives,” in Africa, he said.Cameroon’s ambassador to Israel, Henri Etoundi Essomba, who is also the dean of the Diplomatic Corps stationed in Israel, thanked Netanyahu for joining the envoys in “brainstorming how best we can confront the challenges the prime minister just mentioned together.”Essomba praised Netanyahu for being a rarity among Israeli leaders in that he has emphasized ties with African states and heads of state.“We welcome this initiative and would like to be as instrumental as possible to strengthen and give opportunities to both sides, Israel and Africa,” he stated.Kenyan Ambassador Augostino Njoroge said the Kenyan president’s recent visit to Israel was his best international trip ever, and the country is anticipating Netanyahu’s arrival.South Sudan’s Ambassador Ruben Marial Benjamin asked Netanyahu to visit his country, saying that such a trip could “unite the divided tribes and bring peace and an end to bloodshed.“The African attitude towards Israel has changed and the time has come to look at our shared interests.The people of South Sudan love Israel,” he stated.