Netanyahu to EU: Stop pressuring us into agreements that endanger our existence 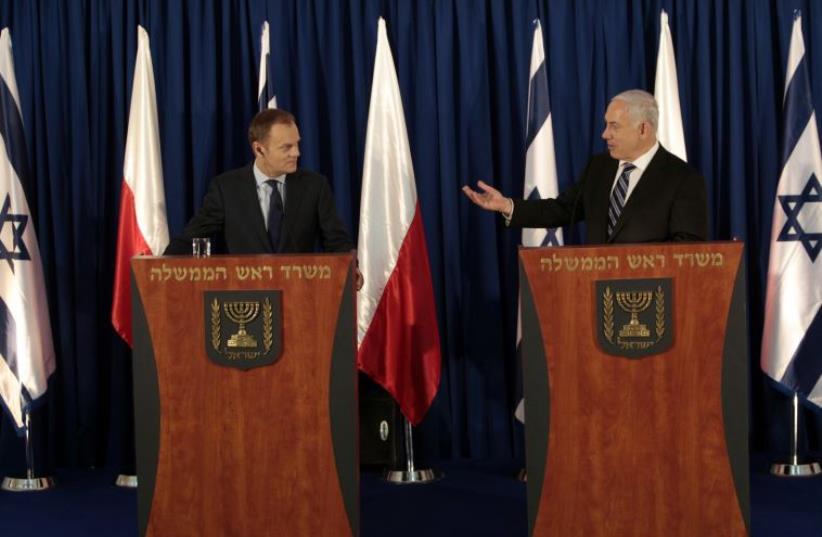 Israel's Prime Minster Benjamin Netanyahu (R) gestures during a news conference with his Polish counterpart Donald Tusk after a joint meeting of Polish and Israeli ministers in Jerusalem
(photo credit: REUTERS/BAZ RATNER)
Advertisement
The European Union must stop pressuring Israel to enter dangerous agreements that threaten the future of the Jewish state, Prime Minister Benjamin Netanyahu said in Jerusalem on Tuesday night.Europe “seeks to unilaterally press Israel into agreements that will endanger our very existence and therefore your very defense,” Netanyahu publicly told visiting European Council President Donald Tusk prior to holding a private discussion with him.Netanyahu said he was glad to see Tusk both as a representative of the EU and as a personal friend.“I've known you for many years. You've been a great friend of Israel, of the Jewish people, and may I say of me personally,” Netanyahu told Tusk.“We welcome Europe," said Netanyahu, before quipping in an off-the-cuff remark, “Does Europe welcome Israel?” Netanyahu told Tusk he hoped that together they could find a way to improve relations between Israel and Europe.Israel, which has strong economic and cultural ties with several European countries, is often at odds with them on diplomatic issues such as Iran’s nuclear program and the stalemate Israeli-Palestinian peace talks. In addition, Israel has been concerned by EU plans to publish legal guidelines that would help its member states affix consumer labels to products produced in West Bank settlements. The guidelines are non-binding, however Israel fears that they could be used to further encourage people boycott the Jewish state.“I find it perplexing that some in Europe are still possessed by the anti-Israeli obsession,” Netanyahu lamented. Hundreds of thousands of people are being displaced and slaughtered in the Middle East, said Netanyahu.“But some in Europe believe the only thing they have to do is to press, boycott and vilify the Middle East's only true democracy, Israel,” Netanyahu stated.“I find this inexplicable but I find it also to the detriment of Europe,” he added.Tusk assured Netanyahu that he need not fear a European boycott.“I think that we have to avoid words like boycott because for sure this is not the intention of Europe. And I am absolutely sure that no country in Europe wants to boycott Israel,” Tusk said.Netanyahu responded, “I am glad to hear it.”Both Israel and Europe face the common danger posed by extremist groups such as ISIS as well as by Iran’s nuclear and military weapons program., Netanyahu said.“Iran is building ICBMs for Europe, not for us. We're on the same continent. They can reach us already. They're building inter-continental missiles for Europe and for the United States,” Netanyahu said. Tusk spoke in favor of the deal to curb Iran’s nuclear program that was hammered out between Tehran and the six world powers; the US, Russia, China, Germany, France and Great Britain. Israel believes the deal leaves Iran with the capacity to develop an atomic bomb as well as emboldens its support of worldwide terrorism which continues to threaten the Jewish state.But Tusk said Europe believed the deal could lead to a breakthrough in relations between Iran and the international community.“The real break in the long term perspective through will not be sustainable if Iran does not change its attitude toward Israel, the security of Israel must remain one of our European priorities. It is also my wish that the voice of Israel in the debate of the nuclear agreement with Iran is both heard and respected in Europe,” said Tusk.Netanyahu told Tusk that Israel and Europe should be working together to help improve life for people in Africa and to halt the dangerous extremism that is sweeping the Middle East.“I want to discuss with you, as I've discussed with other European leaders and will discuss with them, how Europe and Israel can cooperate to assure the progress of modernity for all the peoples of the Middle East, for peace with all our neighbors,” Netanyahu said.Tusk said that one way to address the challenges in the Middle East is to revive the peace process between Israelis and Palestinians that has been frozen since April 2014.He spoke just days after EU foreign policy chief Frederica Mogherini announced that the Quartet planned to meet with Arab states on September 30, on the sides lines opening of the UN General Assembly in New York.“The EU sees no alternative to a negotiated two-state solution,” Tusk said.He ended by speaking of the close ties between Israel and Europe.“Israel matters greatly to the EU. It is Israel’s friend and partner in good times and in bad times,” Tusk said.