PM says he hoped that the journalists' visit will help pave the way to establishing ties with the world’s most populous Muslim country. 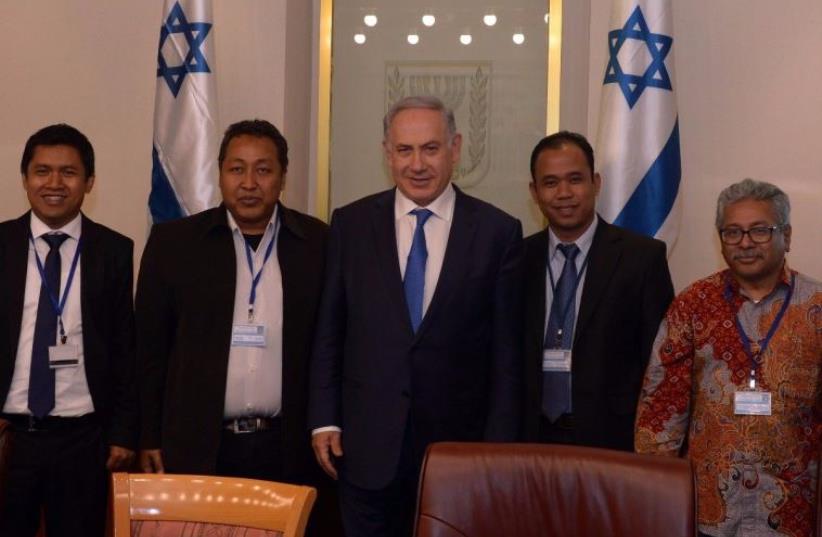 Netanyahu meets with Indonesian journalists in Jerusalem, March 28, 2016
(photo credit: HAIM ZACH/GPO)
Advertisement
It’s time for Israel and Indonesia to establish full diplomatic ties, Prime Minister Benjamin Netanyahu told a group of five senior Indonesian journalists on Monday.Netanyahu told the delegation, here for a week as guests of the Foreign Ministry, that the two countries have many areas in which they can cooperate, such as in the fields of water and technology.“The relations between Israel and Indonesia need to change,” he said. “I have not a few Indonesian friends on facebook. The time has come to change the relations, and the reasons that prevented that in the past are no longer relevant.”Netanyahu said he hoped that the journalists’ visit will pave the way to establishing ties with the world’s most populous Muslim country.Netanyahu told the group that Israel has excellent relations with a number of other Asian countries, including China, Japan, India and Vietnam, and that it is deepening its ties with Russia, as well as countries in Latin America and Africa.“Our relations with the Arab world is also changing, because we are allies in the struggle against Islamic extremism,” he said.The delegation’s visit comes just two weeks after Israel kept Indonesian Foreign Minister Retno Marsudi from visiting Ramallah because – contrary to what Jerusalem said was agreed beforehand – she did not plan to meet Israeli officials.Deputy Foreign Minister Tzipi Hotovely, in a response to a parliamentary question on the matter by MK Ahmad Tibi, acknowledged that Jerusalem has unofficial ties with Jakarta, and said there is “continuous contact” between the two countries.Despite the lack of diplomatic ties, in 2015 the two countries did some $150 million in trade, more trade than Israel had that year with European countries such as Latvia, Lithuania, Estonia and Iceland; more trade than with most South American countries; and more trade than with every African state, with the exception of Egypt and South Africa.