Abbas says he is ready to meet Netanyahu "at any time." 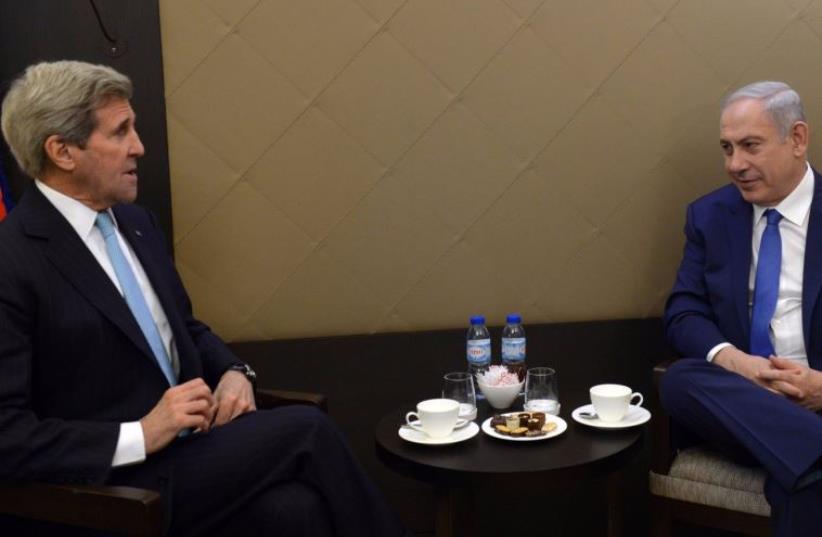 Prime Minister Benjamin Netanyahu and US Secretary of State John Kerry on the sidelines of the World Economic Forum, in Davos Switzerland ‏
(photo credit: CHAIM TZACH/GPO)
Advertisement
Amid an unusual public spat with a senior US senator, Prime Minister Benjamin Netanyahu spoke Friday with Secretary of State John Kerry and stressed that Israel was thoroughly investigating the shooting incident involving an IDF soldier in Hebron 10 days ago.Sen. Patrick Leahy (D-Vermont) and 10 US congressmen sent a letter to Kerry on February 17 – long before the Hebron incident – asking him to investigate Israel over “a disturbing number of reports of possible gross violations of human rights” in the country, citing alleged extrajudicial killings of Palestinians by IDF soldiers.The letter also expressed concerns about Egyptian abuses, and should either country be found in violation of human rights, a law authored by Leahy in 1997 would require the State Department and Department of Defense to cut foreign assistance.Netanyahu responded to Leahy’s letter by saying that his complaints should be directed against those who “incite youngsters to commit cruel acts of terrorism.”“The IDF and the Israel Police do not engage in executions,” Netanyahu said. “Israel’s soldiers and police officers defend themselves and innocent civilians with the highest moral standards against bloodthirsty terrorists who come to murder them. Where is the concern for the human rights of the many Israelis who have been murdered and maimed by these savage terrorists?” Leahy rebuffed the prime minister’s criticism, and issued a statement saying that investigating the matter “is only fair to US taxpayers, and it is necessary to upholding the law that our country stands for.”One Israeli government official said Kerry and Netanyahu speak regularly, and that the Leahy letter was just one of a number of issues – including the Palestinians and other regional issues – that they discussed.Earlier Friday, State Department spokesman Elizabeth Trudeau, in response to a question asked at the daily State Department briefing about Israeli house demolitions, said that the US is “concerned about the demolitions undertaken by Israeli authorities that continue throughout the West Bank and east Jerusalem.These actions are indicative of a damaging trend of demolition, displacement, and land confiscation, and alongside settlement-related activity and continued construction, undermine the possibility of a two-state solution. They also call into question the Israeli government’s commitment to that two-state solution.”Jerusalem had no immediate response to that statement.Diplomatic officials did, however, respond to claims made by PA President Mahmoud Abbas during a Channel 2 interview on Thursday that he had offered to meet Netanyahu to restart negotiations.“I will meet with him, at any time. And I suggested, by the way, for him to meet,” he said in English.Asked what became of that overture, Abbas said: “No, no. It’s a secret. He can tell you about it.”An official in the Prime Minister’s Office said Netanyahu has said consistently that he is willing to meet Abbas anywhere and anytime without preconditions, and that he is not the one standing in the way of talks.Abbas has consistently set preconditions for meeting Netanyahu, ranging from an end to any construction over the Green Line to an Israeli acceptance that the negotiations be based on a total Israeli withdrawal to the 1949 ceasefire line.Reuters contributed to this report.