According to 'Huffington Post,' premier pushed for invite to event hosted by the Center for American Progress. 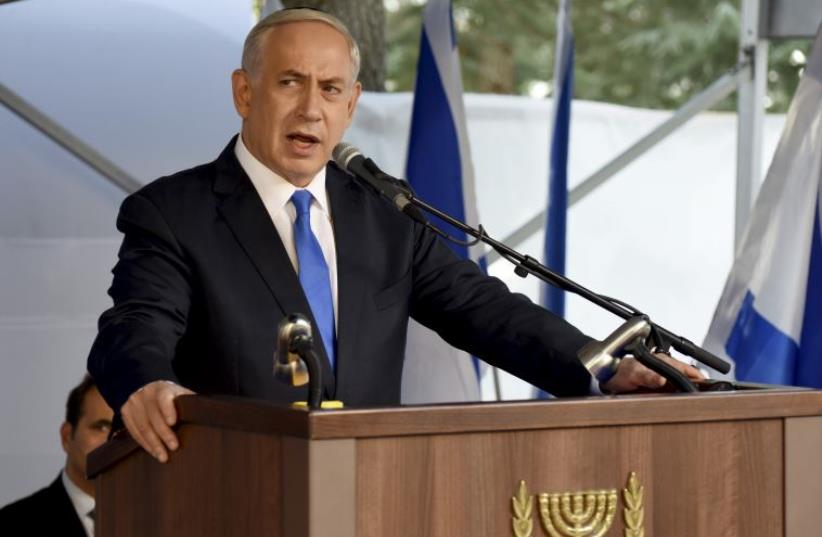 Prime Minister Benjamin Netanyahu delivers a speech during a memorial ceremony for the late Yitzhak Rabin at Mount Herzl military cemetery in Jerusalem
(photo credit: REUTERS)
Advertisement
After his very public campaign denouncing the Iran nuclear deal, Prime Minister Benjamin Netanyahu will seek to make amends with American liberals by addressing a think tank closely aligned with the Democratic Party, the Huffington Post reported before dawn on Wednesday. According to HuffPost, the Israeli government and AIPAC successfully lobbied the Center for American Progress to allow the premier to deliver a speech during an event at the institution on November 10.Netanyahu is scheduled to travel to the United States next month. During his trip, the prime minister is due to meet US President Barack Obama at the White House. The premier's vocal criticism of the Obama administration's drive for a nuclear agreement with the Islamic Republic as well as his pre-election disavowal of a two-state solution have earned him pariah status among progressives, many of whom were reportedly perplexed at the CAP's acquiescence to Jerusalem's request for an audience.Netanyahu also bucked diplomatic protocol by colluding with the Republican leadership in arranging for a speech about the pitfalls of the Iran deal before a joint session of Congress, all without the knowledge of the Obama administration. “[Netanyahu’s] looking for that progressive validation,” a former CAP staffer is quoted as telling HuffPost, “and they’re basically validating a guy who race-baited during his election and has disavowed the two-state solution, which is CAP’s own prior work."During the election campaign earlier this year, Netanyahu sought to spur right-wing voters to go to the polls by warning that "Arab voters are going en masse to the polls" thanks to "left-wing NGOs [that] are bringing them on buses."The premier also told a right-wing news outlet that no Palestinian state would emerge under his watch. The Obama administration reacted angrily to Netanyahu's comments, prompting the prime minister to clarify the remarks.With the Iran deal concluded, the prime minister now appears to want to turn the page and start anew with Democrats.