This will be the first visit by Netanyahu to Moscow since November 2013. 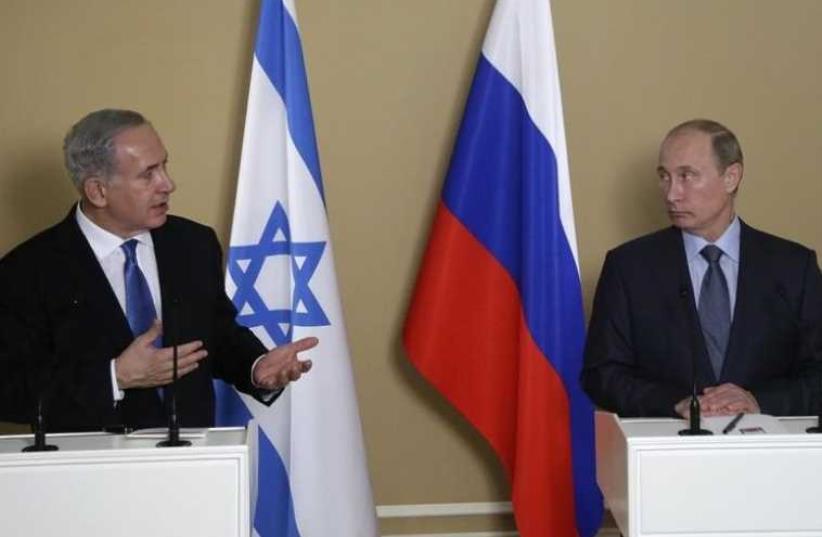 Prime Minister Benjamin Netanyahu and Russian President Vladimir Putin
(photo credit: REUTERS)
Advertisement
Prime Minister Benjamin Netanyahu will travel to Moscow next week to meet Russian President Vladimir Putin and discuss Russia’s recent troop deployments in Syria, the Prime Minister’s Office announced Wednesday.This will be the first visit by Netanyahu to Moscow since November 2013.According to the Prime Minister’s Office, Netanyahu will speak to Putin about the threats Israel is facing from the transfer of lethal, state-of-the-art weaponry to Syria, and the danger that some of this weaponry will find its way into the hands of Hezbollah and other terrorist organizations.The visit next Monday will come just a week before Netanyahu is scheduled to go to New York on September 29 for the UN General Assembly meeting, and just over a month before a scheduled meeting with US President Barack Obama in Washington.The White House announced Wednesday that the meeting between Obama and Netanyahu will take place on November 9 at the White House. The meeting will take place during a trip Netanyahu is making to Washington to address the Jewish Federations of North America.The two last met in October 2014, when Netanyahu flew to Washington after addressing the UN General Assembly. Obama refused to meet Netanyahu when the prime minister went to Washington to address Congress against the Iran deal in March.The White House issued a statement Wednesday saying Obama “looks forward to discussing with the prime minister regional security issues, including implementation of the Joint Comprehensive Plan of Action to peacefully and verifiably prevent Iran from acquiring a nuclear weapon, and countering Tehran’s destabilizing activities.”The statement said the president “also looks forward to discussing Israel’s relations with the Palestinians, the situation in the Gaza Strip and the West Bank, and the need for the genuine advancement of a two-state solution.”Amid concerns that the sharp disagreement between Netanyahu and Obama over the Iran deal has harmed ties between the two countries, the statement said Netanyahu’s visit “is a demonstration of the deep and enduring bonds between the United States and Israel, as well as the unprecedented security cooperation, including our close consultations to further enhance Israel’s security.”Netanyahu’s visit to Moscow comes fast on the heels of trips he took earlier this month to Paris and Rome.