The president spoke to 'New York Times' columnist Thomas Friedman as part of his public relations campaign to rally support for the Iran agreement. 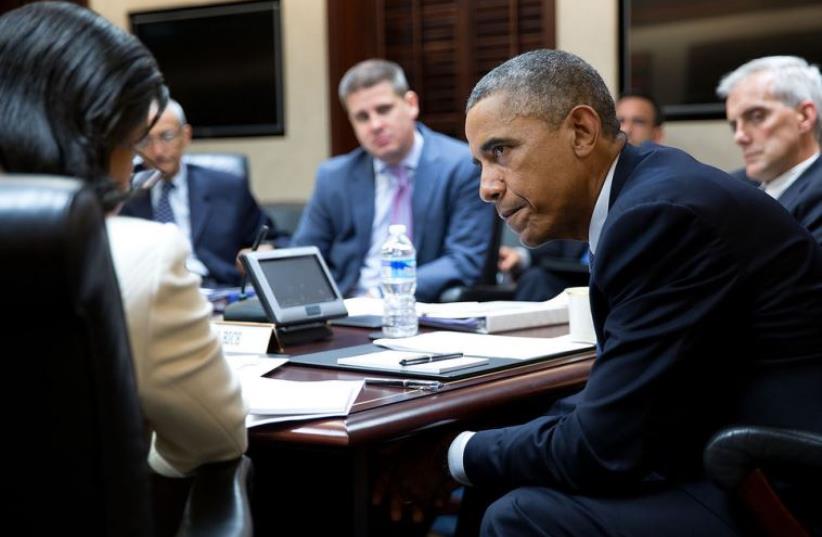 President Barack Obama listens to National Security Advisor Susan E. Rice during a National Security Council meeting in the White House
(photo credit: OFFICIAL WHITE HOUSE PHOTO / PETE SOUZA)
Advertisement
Prime Minister Benjamin Netanyahu’s anticipated efforts to lobby Congress to derail the Iranian nuclear agreement will fail, US President Barack Obama told New York Times columnist Thomas Friedman on Tuesday.The president spoke to Friedman as part of his public relations campaign to rally support for the Iran agreement, which has been subject to scathing criticism from the Israeli government and its sympathizers in the United States.
U.S. Republicans slam Iran deal
“Prime Minister Netanyahu would prefer, and many of the critics would prefer, that [Iran] doesn’t even have any nuclear capacity,” Obama told The New York Times. “But really, what that involves is eliminating the presence of knowledge inside of Iran.”“Nuclear technology is not that complicated today, and so the notion that the yardstick for success was now whether they ever had the capacity possibly to obtain nuclear weapons — that can’t be the yardstick,” Obama said. “The question is, do we have the kind of inspection regime and safeguards and international consensus whereby it’s not worth it for them to do it? We have accomplished that.”
Obama: Iran deal cuts off all pathways to nuclear weapons
Obama told Friedman he was confident that Congress will not be able to muster enough nay votes to shoot down the agreement, much to the chagrin of the Israeli prime minister.“[P]erhaps [Netanyahu] thinks he can further influence the congressional debate, and I’m confident we’re going to be able to uphold this deal and implement it without Congress preventing that,” the president told Friedman. “But after that’s done, if that’s what he thinks is appropriate, then I will sit down, as we have consistently throughout my administration, and then ask some very practical questions: How do we prevent Hezbollah from acquiring more sophisticated weapons? How do we build on the success of Iron Dome, which the United States worked with Israel to develop and has saved Israeli lives?”“In the same way I’m having conversation with the Gulf countries about how do we have a more effective interdiction policy, how do we build more effective governance structures and military structures in Sunni areas that have essentially become a void that [the Islamic State] has filled or that, in some cases, Iranian activities can exploit?”Obama rebuffed criticism that the agreement with Iran does not address the Islamic Republic's foreign policy activities, namely its support for radical armed groups like Hezbollah and Hamas, as well as its notorious human rights record.“We are not measuring this deal by whether it is changing the regime inside of Iran,” said the president. “We’re not measuring this deal by whether we are solving every problem that can be traced back to Iran, whether we are eliminating all their nefarious activities around the globe. We are measuring this deal — and that was the original premise of this conversation, including by Prime Minister Netanyahu — Iran could not get a nuclear weapon. That was always the discussion. And what I’m going to be able to say, and I think we will be able to prove, is that this by a wide margin is the most definitive path by which Iran will not get a nuclear weapon, and we will be able to achieve that with the full cooperation of the world community and without having to engage in another war in the Middle East.”